With increasingly frequent severe weather events and global warming, the public is becoming increasingly aware of climate change. Widespread hope remains that it is not too late to mend our ways and avert our own extinction. Alas, it is far too late. The tipping point that practically assured we would wipe ourselves out was in 1940, as world leaders initiated global war.

The 1919 Treaty of Versailles after the 1st World War ensured a 2nd World War. France’s nationalist truculence towards Germany and demand for impossible reparations guaranteed that Germany would collapse economically, and that the Germans would take revenge when they could.

The reckless Roaring Twenties in the United States came to a crashing halt in 1929. The Great Depression ensued. The folly of unbridled capitalism caused the fall of the industrialized West that lingered through the 1930s. No cure was offered. Instead, world leaders fumbled for a decade before launching the 2nd World War. Just as France had incited Germany, the US baited Japan into war with its embargo against that island nation.

Global air surface temperature shot up in 1940 as the world geared up for mass destruction. From 1940 there was no turning back from trends that propelled the world of men to self-immolation. 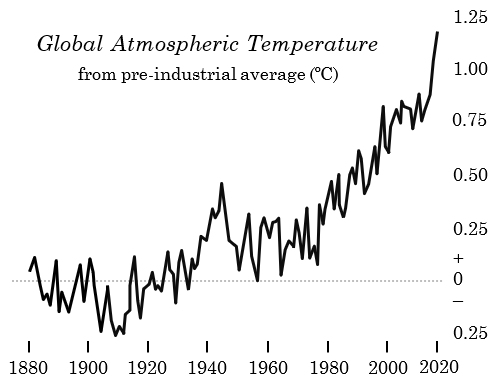 The US promoted and extensively sprayed DDT during World War 2: the beginning of the mass extinction of insects. As insects are critical for all terrestrial ecosystems, their diminution is a harbinger. Though DDT was banned throughout much of the world decades later, it was just the historical spearhead to an ignorant mentality about “bugs,” “germs,” and “weeds” that unleashed an onslaught of toxic chemicals worldwide.

America ended the 2nd World War with the spectacular atrocity of 2 atomic bombs. The proliferation and testing of nuclear weapons accelerated global pollution.

Lead in gasoline was commercialized in the 1920s. Los Angeles had its first episodes of thick smog in 1943. The burgeoning population of automobiles in the post-war period turned urban air toxic in much of the industrialized world. Even now, the global infestation of vehicles only grows. So too with huge container ships which crisscross the world in swarms, burning the nastiest fossil fuel.

The demand for fossil fuels surged since the 2nd World War. Both its extraction and consumption have been a death knell for humanity. Fracking is noteworthy in accelerating massive pollution of the earth, groundwater, and the air.

“Better living through chemistry” took off in the 1950s with plastic. In 1955, Life magazine celebrated the dawn of “throwaway living,” thanks to disposable plastics. Now poisonous plastics are consumed by practically all animals, including us. Even our drinking water is laced with plastic.

The “Green Revolution” that the US initiated in the 1960s unleashed monocropping, deforestation, fossil-fuel fertilizers, pesticides, and a faster draining of nonrenewable freshwater. World hunger has not been solved, nor will it, as the problem was never enough food – it was instead food distribution, waste, and poverty.

The foregoing highlights touchstones for the point of no return to the mass extinction event that we sponsored. 1940 marks a departure point to vectors entrenched during the 2nd World War and sustained since.

As a barometer of planetary health, global warming terminally took off in 1940, and its rise has only hastened since. The oceans soaked up over 90% of the warming until the 21st century. Having reached oceanic thermal saturation, air temperatures will soar in the next few decades. Climate change is a nonlinear dynamic: starting gradually but accelerating through self-reinforcing feedback.

Clean water and food will become increasingly scarce as pollution, exhausted soils, increasing aridity, and searing heat take their accumulative tolls. Living for all but the wealthy will get even harder after the next recession – which is past due even now but will assuredly arrive within the next few years. Even the rich will succumb when the economic pyramid inexorably collapses.

World civilization will collapse within the next half-century. Humanity will surely be extinct by the dawn of 22nd century, along with innumerable other species. Living is hard. Dying is easy.

By 1940 the foolhardy, short-sighted men that led the world had sealed our doom. World leadership has not improved since; quite the contrary. Look at political leaders now. Who is doing something besides paying lip service (at most)?