The cell cycle is the life cycle of cell, though the term is often used to refer to the mitotic phase, when cell division occurs. Between divisions, a cell is in interphase, which is its ordinary life.

Cell division is a daedal process of cell replication. There are a variety of regimes for cell division, depending upon the type of cell and organism.

Cell division is dynamically regulated, with much decision-making. Cells decide to divide based upon the environment they sense they are in, cell size, and the time of day. Changing cell fluid pressure helps drive cell division.

Prokaryotes asexually reproduce via fission: splitting their cells into 2 (binary fission) or more (multiple fission). Some organelles in eukaryotic cells also replicate via fission, as do some single-celled eukaryotes.

In eukaryotic cell division, a parent cell divides into daughter cells. The cell nucleus divides first (mitosis), followed by the cytoplasm splitting in 2 (cytokinesis). For unicellular eukaryotes, such as amoeba, cell division is equivalent to reproduction: a new organism is created.

The primary concern of cell division is maintaining the parent cell’s genome. Prior to division, the genomic encyclopedia stored in chromosomes (or prokaryotic genophores) must be precisely replicated, and the duplicated genome cleanly bifurcated between cells.

Considerable cellular infrastructure is involved in ensuring genomic consistency from one generation to the next. The intricacy of cell division illustrates the amazing intelligence in biological processes. 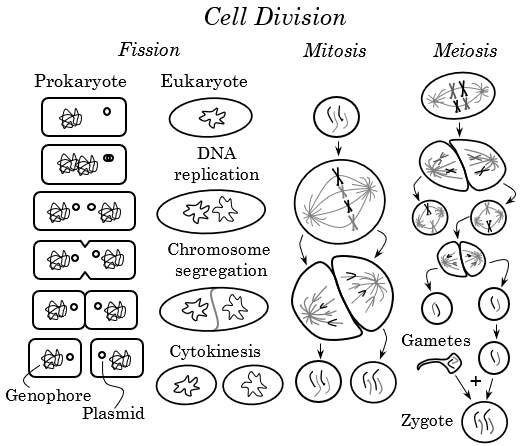