We need not hesitate to admit that the Sun is richly stored with inhabitants. ~ William Herschel in 1818

4.56 bya, accretion of a hydrogen-laden protostellar core, covered in a cloud of dust, hit a critical point. Gravity was working its magic: compressing accreted matter, generating heat. The molecular cloud collapsed into a condensed ball; as perfect a sphere as Nature can make. Along with 1,000+ siblings, the Sun emerged from a stellar nursery that had formed 30 million years earlier.

This cluster of stars was birthed further out in the galaxy. The Sun astronomically inched up the galactic arm, fortuitously never suffering the casualty of collision with another star.

The Milky Way’s frenzy of birth stars peaked 10 billion years ago. That makes the Sun a late bloomer, galactically speaking.

50 of the Sun’s siblings should still be in the neighborhood of 300 light-years. 400 in the family are likely within 3,000 light-years.

By the time the Sun was visible, the dust had practically cleared, leaving a ball of hydrogen (74.9%), helium (23.8%), and various heavier elements (1.3%). About 12 million years after formation, the Sun began to radiate. It’s been hotting up ever since.

Most stars like the Sun rotate relatively quickly in their infancy, spinning once every few (Earth) days before slowing down as they age. The early Sun was a slow rotator: completing a rotation just once every 9 days. This slow rotation was fortuitous for engendering life in the solar system, as rapidly rotating stars fling more plasma into space, battering planets in their orbit.

The Sun and its atmosphere are layered. From the inside out, the solar interior comprises: a core, a radiative zone, and a convective zone. The solar atmosphere consists of the photosphere, chromosphere, a narrow transition region, and the corona. Beyond is the solar wind. 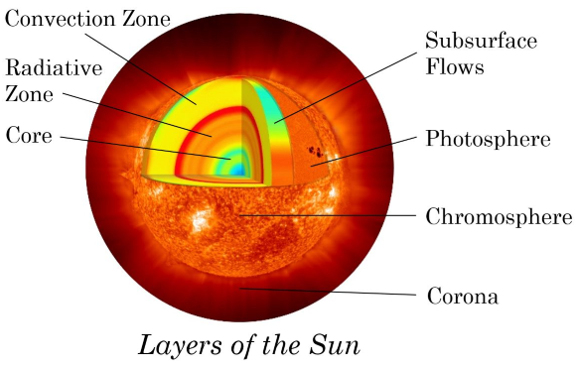 The core extends a quarter of the way to the Sun’s surface. Though only ~2% of the Sun’s volume, the core is 15 times the density of lead, and has nearly 50% of the Sun’s mass.

In the core, which is at 16 million K, fusion reactions consume hydrogen to form helium and send energy to the surface, which blazes away at 6000 K.

When matter burns, it is a chemical reaction that merely rearranges the electrons of the elements involved. One billionth of matter’s mass is lost. In contrast, fusion changes the nature of the inflicted elements. Fusion is a billion times more efficient than burning in energy release. The Sun is not burning, but it is converting ~4.1 billion tonnes of matter into energy every second.

The radiative zone extends from the core to 70% of the way to the surface (chromosphere); making up 32% of solar volume and 48% of the Sun’s mass. Light created in the core scatters throughout the radiative zone. It may take a million years for a photon to make its way out.

The core of the Sun produces gamma rays. As that energy radiates outward, it is absorbed and re-emitted. By the time the energy reaches the surface and heads into space, emissions are primarily visible light and infrared radiation (heat).

The chromosphere is entirely made up of spiky structures called spicules, which are typically 1,000 km across, and up to 10,000 km high. Spicules last about 15 minutes.

Outside the chromosphere is the corona, a wispy crown of blazing heat: 1 million K. The corona is 300 times as hot as the Sun’s surface, owing to 10-million-K streams that shoot up from the surface.

High-speed plasma jets and magnetic tornadoes propagate from the chromosphere to the corona, distributing heat and depositing their own energy. While much of the gaseous heat streams outward, some falls back onto the Sun’s surface as coronal plasma rain.

The mechanism behind all coronal irruptions is magnetic reconnection: the rapid shifting of magnetic topography in the Sun’s plasma, with magnetic energy converted to heat, kinetic energy, and particle acceleration.

The Sun spins about every 25 days, at an angle of 7.25° to the planetary disk around it. Because of its tilt, a good gander at the solar poles eludes Earthlings.

Earth spins once on its axis every 24 hours (a day), and travels around the Sun every 365 days (a year). (Earth orbits the Sun every 365.242199 days, coursing at 108,000 km/h, covering 940 million kilometers each orbit.) In contrast, the Sun’s schedule is convoluted. While a day at the equator lasts 25 days, polar regions are pokier, taking a few days longer to complete a rotation.

The layers of the Sun invoke a complex convection dynamic that modulates energy production and distribution. The Sun’s core rotates nearly 4 times faster than its visible outer shell (photosphere); and there is even a slight difference in rotation between the top and bottom layers of the photosphere.

The interior of the Sun has complicated rotation because of turbulence, but the outer layer of the Sun isn’t turbulent. The photosphere is stable, so it’s surprising that there would be any gradient in its rotation. ~ American astronomer Jeff Kuhn

Photons created in the Sun’s core ricochet around on their way out, gaining a bit of momentum from each atom they bounce off. When a photon finally leaves the photosphere, it carries its acquired momentum with it.

We tend to think that the Sun is yellow. That impression owes to atmospheric filtering which reduces higher energy blue light. In space sunlight looks white.

As photons radiate from the Sun at different angles, the gas of the photosphere gets a backward push from the photonic brawl to get out. The shove associated with each departing photon is negligible, but the barrage adds up, and accounts for the rotational discrepancies between photosphere layers. 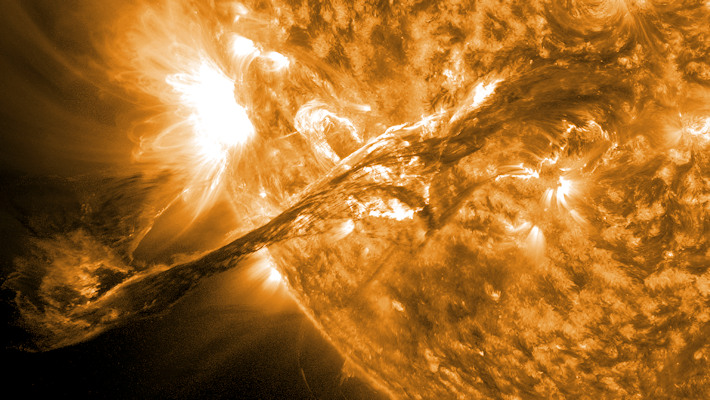 As the equator spins, it drags the magnetic field that connects the Sun’s poles. This creates a solar magnetic cycle. This cycle, from magnetic twist to energy discharge, runs 11.07 Earth years; corresponding precisely with alignment of the Sun, Venus, Earth, and Jupiter – a resonance of celestial bodies.

Planetary tidal forces act as minute, external pace setters. The impulse for this oscillation requires almost no energy. If you only just give a swing small pushes, it will swing higher with time. ~ Frank Stefani

Corresponding to the magnetic cycle presides a cyclic prevalence of sunspots. Their greatest appearance is at the solar maximum, during which the corona sloughs off the magnetic fingerprint of the previous cycle by sweeping it to the poles.

The fluxing solar magnetic field reverses direction around the time of the solar maximum. When this does not happen, the Sun is heading for a solar minimum (of sunspots). While eruptions still occur, spots do not form on the surface because their magnetic power is not strong enough to overcome the convective mixing of gas at the surface, of which the jet stream is part. Previous spots disappear.

The Sun’s magnetic turbulence drives various energy flows. Incited by magnetism, tornadoes 1,500 km wide rise from the surface into the corona. Each lasts 10–15 minutes. There are 11,000 tornadoes raging on the Sun at any time.

Sunspots are eruptions onto the surface, from perturbations in deeper magnetic currents, which themselves interrelate to the convective mixing on the surface. Sunspots create local drops in temperature, rendering the surface gas darker; hence the spots. Sunspots are indicative of solar flares and coronal mass ejections. These outbursts disrupt satellite and radio communications on Earth.

There is an east-west jet stream near the Sun’s surface, influenced by convection currents below. Changes in the flow of the jet stream presage changes in the pattern of sunspots by 4 years.

Energetic outflows from the corona power the solar wind, which blows a plasma of charged particles into the surrounding interstellar medium, creating a bubble-like heliosphere. As an interplanetary plasma medium inflated by the solar wind, the heliosphere defines the domain of the Sun. It creates an interstellar interaction with the dust and gas clouds that it moves through.

The Sun moves at 83,500 kilometers per hour. (The heliosphere is not moving fast enough to create a shock wave, as long thought.) The heliosphere carries the Sun’s magnetic field, which is overridden by planets that have their own magnetosphere, such Earth and Jupiter. The galaxy’s own magnetic field sculpts the heliosphere’s boundary with interstellar space.

The Sun has consumed about half of its hydrogen, leaving another 5 billion years of peaceful production. After that, the Sun will become a red giant: outer layers expanding as the hydrogen fuel in the core is consumed, causing the core to contract and heat up.

Following its red giant phase, the Sun will throw off its outer layers, creating a planetary nebula: a recycling of material to the interstellar medium, providing fodder for further galactic evolution. The remaining core will slowly cool and fade, over billions of years, transforming the now-bright beacon into a diminished white dwarf.

A day without sunshine is like, you know, night. ~ American comedian Steve Martin