From 1,000 km above Earth’s surface stretches layered belts of highly charged particles. Via the first artificial satellites, the belts were first noticed in 1958, and named after their discoverer: American astrophysicist James Van Allen.

This plasma zone arises from the planet’s magnetic field, which holds the belts in place.

The Van Allen belts are 2 pronounced concentric doughnut-shaped rings that strip atoms of their electrons and accelerate the subatomic particles to near lightspeed. No real gap exists between the 2 zones; simply gradations in radiation intensities. 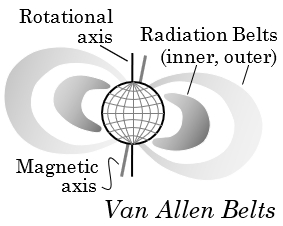 As a particle approaches a magnetic pole, the increased field strength bounces it back to the other pole. Hence the belts are most intense over the equator, and effectively absent above the poles. Over time, particles collide with atoms in the atmosphere and are knocked out of the belt.

The inner belt (1,000–6,000 km) largely comprises protons, energized to 30 million electron volts (MeV). Many of the protons are produced by decay of neutrons, which wither from the intense radiation.

The outer belt (13,000+ km), fed from particles both atmospheric and solar in origin, has lower-energy protons. The most energetic particles in the outer belt are electrons, reaching several hundred MeV.

There is also a 3rd belt between the inner and outer belts, which modulates the activity of the outer belt.

Particles in the belts stream in spiral paths along the force lines of Earth’s magnetic field. Synchronicity in the frequency of electromagnetic waves and electrons in transit keeps the belts enlivened.

At 11,600 km altitude, there is an extremely sharp boundary at the inner edge of the outer belt that acts as a shield, blocking ultrarelativistic electrons from whizzing closer to Earth’s atmosphere. This boundary is a mystery, as Nature typically abhors strong gradients.

It’s almost like these electrons are running into a glass wall in space. The invisible shield blocking these electrons is an extremely puzzling phenomenon. ~ American astrophysicist Daniel Baker

Solar flares disrupt the belts, which in turn invokes auroras and magnetic storms. Even during less turbulent times, the Van Allen belts endanger man-made satellites with their intense, fluctuating radiation.