According to quantum mechanics, what we can observe about the world is only a tiny subset of what actually exists. ~ Sean Carroll

▫ Breaking matter down into its constituent parts has turned into ratchets of scaling down, from atoms into an abyss of the infinitesimal; a Matryoshka doll of incrementally smaller constituents. Atoms were the smallest thing until 1897, when J.J. Thomson sussed electrons.

This led to discovering that an atom has a nucleus, comprising nucleons (protons and neutrons), with electrons whirling about in an orbital cloud. Ernest Rutherford played a leading role in this discovery.

In the next doll down, nucleons were found to be made of even smaller bits: quarks, which are supposedly elementary quanta. The quark model was independently proposed by Murray Gell-Mann and George Zweig in 1964.

▫ At the beginning of the 20th century, Max Planck discovered the limits of phenomena at the smallest scale. The Planck quantum of action, commonly called the Planck constant, characterizes the level at which Nature quantizes fields into phenomenal existence.

▫ Fields naturally localize and granulate, creating the seeming particles which compose Nature. A quantum is not a particle, like some infinitesimally tiny billiard ball, but instead a segmented field phenomenon that deceptively appears particulate.

▫ Quantum mechanics is bedeviled by inherent uncertainty. Localized fields emergently quantize. Before they do, their actualization is uncertain. Quantum uncertainty is a property of Nature, not just a measurement difficulty.

▫ The Standard Model (SM)  is the conventional model of quantum mechanics, focused on interactions of elementary particles, which are particles supposedly lacking constituents, not comprised of smaller particles. According to SM, fermions are the elementary particles of matter, while immaterial bosons are force carriers. Bosons impart on fermions the attributes that make matter function as it does.

Many independent lines of evidence now suggest that most of the matter in the universe is in a form outside the Standard Model of particle physics. ~ English astrophysicist David Harvey et al

▫ Particle physics models all posit symmetries which do not exist. To account for actuality, quantum theories apply a patch: spontaneous symmetry breaking (SSB). Resorting to SSB as a bandage indicates that quantum theory is at best a coarse approximation. 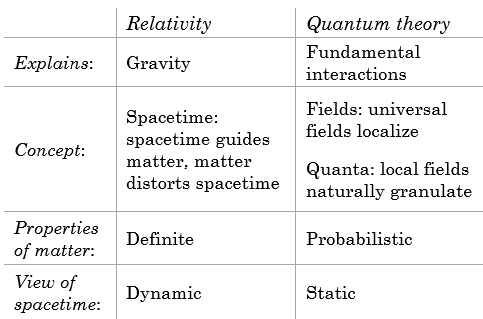 ▫ Under the principle of locality, interactions between quanta are bound by the speed of light. Relativity forbids superluminal effects. But nonlocality occurs. What Einstein called “spooky action at a distance” has been demonstrated by entanglement: quanta far apart behaving synchronously. Entanglement has even been shown in subatomic particles that do not exist at the same time. This demonstrates that time, as well as space, is emergent: spontaneously coming into existence coherently.

▫ The non-mainstream quantum pilot wave theory postulates pilot waves which guide the emergence and activities of quanta. This apt theory invokes a coherence in Nature, provides for deterministic order, and is consistent with known physics.