In the late 5th century bce, Empedocles originated the cosmogenic theory of there being 4 basic substances: earth, water, wind, and fire. He also proposed that love and strife could mix and separate these substances, which Plato termed elements. (Ancient traditions throughout the world had also found these 4 basic elements.) Aristotle furthered Empedocles’ elementalism with the idea that all matter was made from a mixture of 1 or more elements (which he called roots).

The periodic table is intertwined with the quest to discover new elements. The 1st element discovered since ancient times was furtively made by German merchant and alchemist Hennig Brand, who in 1669 distilled human urine to reveal a glowing white substance which he named phosphorous. Brand’s reeking distillation was part of his continuing quest to find the philosopher’s stone.

Brand kept his discovery of phosphorus secret until its published rediscovery by Anglo Irish chemist Robert Boyle in 1680. That same year, Boyle put a phosphorous paste with a sulfur tip on wooden sticks and invented the forerunner of modern matches. (Phosphorus’ fiery reactivity earned it the distinction of being “the Devil’s element.”)

Boyle defined a chemical element as “a substance that cannot be broken down into a simpler substance by a chemical reaction.” This definition served for 3 centuries, until subatomic particles were discovered, whereupon the definition shifted to characterizing an element by proton count.

Lavoisier’s 1789 Elementary Treatise of Chemistry, the first modern chemistry textbook, listed the “simple substances” that Plato and Boyle had termed elements, bifurcating them into metals and nonmetals. Lavoisier also listed light and caloric as elements, which were believed at the time to be material substances.

German chemist Johann Wolfgang Döbereiner began classifying elements into groups by atomic weight in 1817. In arranging the chemical elements by atomic weight, French geologist and mineralogist Alexandre-Emile Béguyer de Chancourtois first noticed their periodicity. de Chancourtois failed to publish the irregularly arranged table that he had constructed. It did not matter. His 1862 article was ignored by chemists, having been written in terms of geology.

Based upon accumulated understanding of chemical properties, Russian chemist Dmitry Mendeleyev published the modern form of the periodic table in 1869, having noticed the regularities that form the basis of the table, and having the foresight to complete the table by predicting the characteristics of elements not yet discovered.

The periodic table is a tabular arrangement of the 118 chemical elements (94 of which occur naturally on Earth), organized on the basis of their atomic numbers, electron configurations, and recurring chemical properties. Elements are ordered by atomic number, which is a product of protonic girth. 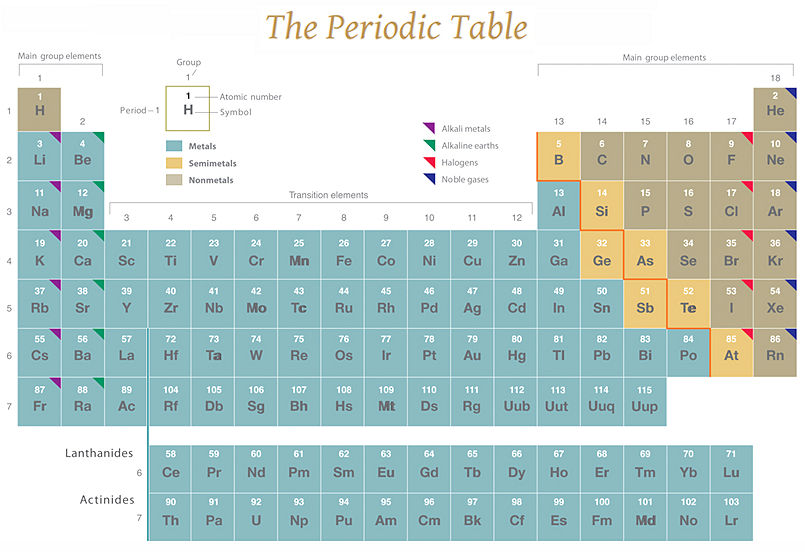 The table is typically a grid of elements, with rows called periods and columns called groups. Element groups have the same number of electrons in their outer shell. A new row (period) begins when an element sprouts a new electron shell.

The distinction between metals and nonmetals is one of the most fundamental in chemistry. Good conductors of heat and electricity, most elements are metal. They may be pulled into wires because they are ductile; hammered into sheets because they are malleable; and most are lustrous (shiny).

(Hydrogen (H) is the only nonmetal on the left side of the table (at least at ambient temperature and pressure). The chemical properties of elements 109–111 and 113–118 are unknown.)

Toward the right of the table in the figure above, metalloids (semimetals) are shown darkly shaded. To the right of the semimetals are nonmetals. The lightly shaded, far-right group (18) comprise the noble (inert) gases. (The term noble refers to low reactivity. It was first used in 1898 by German chemist Hugo Erdmann, as an analogy to “noble metals,” which also have hesitant reactivity.)