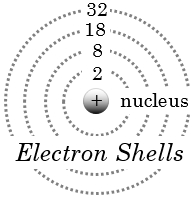 The 1st shell of an atom, as with helium, has only 2 electrons. The 2nd shell is full at 8 electrons. Since negatively charged electrons are attracted to their positively charged nucleus, electrons in an atom will generally occupy an outermost shell only when the shells within have been filled.

Atoms with an incomplete outer shell naturally bond with other atoms to form molecules. These bonds involve sharing electrons.