Carbon (C) is the only element that can form chains and rings on its own, using single or double bonds. Thus, carbon acts as a backbone in manifold molecular construction.

Coupled to their energetically ready construction, the complexity and flexibility of macromolecules lets them work in a wide variety of roles: functioning as structural components, molecular messengers, enzymes, energy sources, nutrient storage, and storehouses of genetic information.

While carbon normally bonds with 4 other atoms, other configurations are possible. Mellitene (C12H18) is based upon a hexagonal ring of 6 carbon atoms offering 6 arms for 6 carbon hydrogen atoms that each have 3 hydrogen atoms attached. Leftover electrons zip around the middle of the ring, strengthening core carbon bonds and thereby stabilizing the molecule. 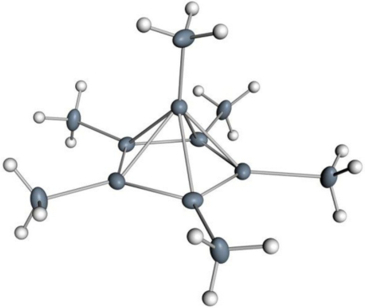 An allotrope is an element existing in multiple forms, with atoms bonded together in different ways. The structural variations characterizing allotropy apply only to distinct forms of an element within the same phase, and only to elements, not compounds.

A more pedestrian carbon allotrope than mellitene is graphite, the stuff of pencil lead. While diamond won’t conduct electricity, graphite will. Yet graphite is the most stable form of carbon.

Because of carbon’s inherent promiscuity, there is a greater variety of carbon compounds than all other elements combined. Plastics and petrol, which are derived from erstwhile plant matter, are carbon polymers.