Most birds eat other animals. Avivorous birds, such as raptors, eat other birds. All birds of prey are carnivorous, as are many other birds, including different wading birds, shorebirds, and some corvids.

Seabirds are typically piscivorous: feeding on fish. Pelicans, cormorants, loons, and grebes dive to thrive on aquatic food. Other piscivores patiently try their luck in lurking to pluck, most notably the heron, a wading bird.

Several shorebirds are molluscivores, foraging in tidal flats and swamps. Most are well equipped to deal with the shells that mollusks use to protect themselves.

Snake eating (ophiophagy) is a specialization. Easier fare is found by foraging insects: a diet common to several small birds, including swifts, swallows, flycatchers, and warblers.

Most birds enjoy insects, at least as a supplement. Insects are often a critical source of protein for growing nestlings. Many fledglings are fed insects by their parents even if their mature diet will be quite different.

A few birds are omnivores, the best known being the duck. Many birds will sample foods other than their primary preference. Variety is often the spice of avian life.

Herbivorous birds are somewhat atypical. Despite the appearance of easy pickings, plants are a digestive challenge compared to animals. Per weight, plants are less nutritious and require more digestive processing.

Herbivorous birds often have smaller relatives who are carnivores, as it is otherwise hard to get enough nutritional energy. Most herbivorous birds feed on seeds (granivory), the most nutritious plant food. Game birds (e.g., turkeys, quail, geese, dove), sparrows, and finches are granivorous. Most have specialized bills to crack the specific shells of favored fare. Many granivores, such as peafowl, turkeys, and chicken, have muscular gizzards, which they may pack with stones. This lets them swallow seeds whole and crush them within: an internal digestive mill.

A few birds are into the sweet stuff: nectar, sometimes with a pollen pick-me-up (palynivory). Hummingbirds are the best known nectivores, though sunbirds, honeycreepers, orioles, and the bananaquit are also nectar lovers. The bananaquit, native to the Caribbean islands, Central and South America, is so brazen that it will fly into open windows of homes to steal sugar; hence earning the nickname sugar bird.

Fruit is a fine food, but often seasonal; though tropical forests may bear fruit year-round. When fruit does turn up, it tends to be profusely abundant.

Orangutans are the largest committed fruit eaters (frugivores). Abundance is no problem for an animal of such girth. Orangutans tend to dine alone or in small family groups.

By contrast, most small fruit eaters – monkeys and most fruit-eating birds – forage in groups. That improves the odds of finding fruit, which, when found, there is often enough to go around. This communal strategy is used by other birds facing hard-to-find feasts, including turkeys and vultures. 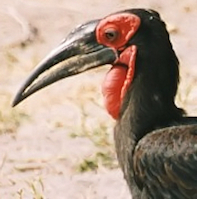 The sociality engendered by foraging often spills over in other facets of life. Hornbills are fruit eaters and have gregarious lifestyles.

Ground hornbills are not fruit lovers. They are instead formidable predators, with a beak like an icepick. This hornbill can hack its way into a tortoise.

Ground hornbills probably descended from frugivores. Their sociality took a turn with their diet. As predators, they hunt in packs, usually family groups.

Some ground hornbills in a hunting pack act as chasers. Others lurk, acting as beaters to scare the prey on, until it runs into the one that takes it down.

Small songbirds lose up to 10% of their body weight overnight, so they must eat well every day. There is a trade-off. Weight gain slows them down, leaving them vulnerable to predators. So, every morning, birds leave their nests and scout for food, assessing the location and quality of fare without eating.

By fasting in the morning, a bird remains nimble enough to dodge predators during daylight hours. As afternoon wears on, birds return to eat, already knowing the best places to dine.

Cellulose, the fiber of leaves, is pure carbohydrate, but hard to digest. Small endotherms can’t pack in enough cellulose and microbes to fuel their high metabolic rate. Termites triumph in that trick by not having to keep themselves warm.

A bird must be at least as a big as a grouse to have a go at being a folivore. Ostriches, with a huge body and relatively low metabolic rate, forage on vegetarian fare; though an ostrich enjoys the odd animal bite when the opportunity arises.

Ostriches often graze side by side with zebra. The two might seem to be eating from the same menu, but their selections are different.

While zebras chew away at ground roughage, ostriches selectively nip buds and succulent shoots; the most nutritious portions. Thus, these foragers are no competition to each other. 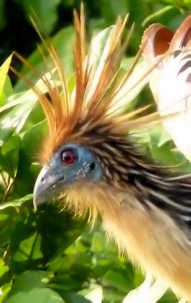 The hoatzin is a pheasant-sized tropical South American bird with a large spiky crest; looking like an unkempt chicken that lives off the leaves of forest trees. While an ostrich ferments its cellulose in a cecum, like a horse, the hoatzin has a rumen: the only such bird. Foregut digesters are prone to belch microbe-generated methane (from digestive methanogens), as does a hoatzin. Hence hoatzin smell like cows.

Like forest fruit, many plants on the plains only grow when it rains. This turns many dry-land plant eaters into opportunistic nomads.

African queleas, a small weaver bird, move in vast flocks, following the rains. A single colony may be tens of thousands to millions of pairs of birds. Humans consider queleas a pest, and so have tried to eradicate them with poisons, napalm, and pathogens, but have gotten the best results by dynamiting the dense colonies.

Quails in Africa and Asia forage likewise, though not in such prodigious numbers, nor to such human annoyance and mass murder. 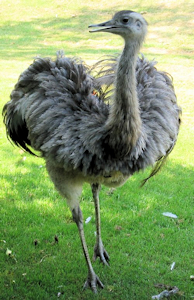 Like ostriches, Australian emus live in dry open spaces, foraging on the tastiest parts of plants, along with small-animal supplement, chiefly insects.

Plentiful pickings are found only after rainfall. They gorge on abundant food, fattening up to 45 kilos, as well as drinking their fill. When the food runs out, emus trek in search of rain.

Emus can travel long distances at a fast, economical trot: with strides up to 275 centimeters, at up to speeds of 50 km/h (kilometers per hour) if necessary, though typically hiking at a steady 7 km/h for hundreds of kilometers at a stretch. Emu legs are among the strongest of any animal.

A trek is metabolically expensive. An emu may lose half its weight, down to 20 kg, from one feast to the next.

Emus have a good sense of smell, fine hearing, and excellent eyesight. Like vultures, they go toward clouds. Emus especially trek toward thunder, in hopes of green grazing.

When food is plentiful, emus are none too social. They avoid each other. But once on the hunt, emus hike in great herds. As they meet, in traveling from one region to the next, new recruits join. 70,000 birds may march together to the next feast. Once at the feeding grounds, emus disperse until the next trek.

Australian farmers have all the regard for emus that the ancient Egyptians had for locusts. They try to thwart a trek by putting up long (up to 1,000 km) fences. Similar fences are built to keep out kangaroos and rabbits.

Plants resist being eaten by stuffing their otherwise tasty bits with toxins. Some animals overcome that by harboring microbes which can cope with the toxins, as well as having a well-equipped liver.

Hoatzin eat leaves that are toxic to others, though limiting their exposure via variety. So too the wood grouse, the largest of the grouse family, which subsists mostly on pine needles, which are highly fibrous and resinous.

Birds are better dispersers. Macaws eat a variety of fruits and succulent plant parts, many of which have toxins. Macaws compensate by eating a specific clay off cliffs which sufficiently neutralizes the toxins. 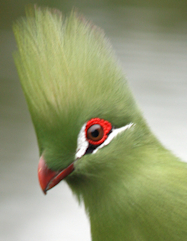 African turacos forage for fruit in bands of up to a dozen. These excellent seed dispersers can eat berries that are positively toxic to other species. 80% of the eaten seeds pass through, unencumbered from future growth prospects. Thus, the berry bearers ensure that turacos alone feed on their fruit.

Turacos are also unusual in feeding their infant chicks fruit, although infant diets are supplemented with tasty invertebrates, including snails.

Plants that seek the help of pollinators provide protein-rich pollen in return for spreading it around. It’s a start. But bribing butterflies, bees, birds, and bats necessitates nectar, a rich sugar solution produced for no other purpose.