Social insects are known to share such information by symbolic communication: using various means, including gestures, to indicate direction and distance.

Insectivorous bird parents feeding a nestful of hatchlings take turns foraging. If one parent finds an abundant aggregation of edible insects some distance from the nest, does it tell the other? The fitness benefit would be considerable. So, it seems likely. But that question remains unanswered, because reliably recorded human observation has not been made.

The honeyguide is an arboreal near passerine, with separate species native to Africa and the Indian subcontinent. A honeyguide has an ironic lifecycle: a vicious beginning, leading to solicitously seeking cooperation from other species to feed. 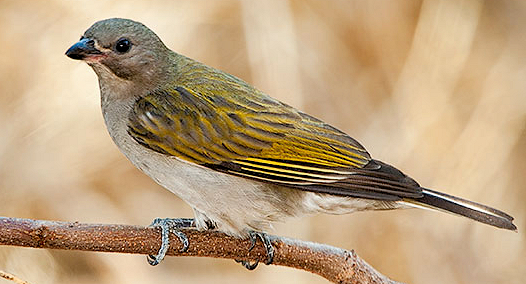 Honeyguides are brood parasites: laying their eggs in the underground nest of another bee-eating bird species, to be reared by adopting parents. An adult gives it offspring a head start by incubating its egg for a day before placing it in another’s nest. When placing her own in, an adult honeyguide punctures any other eggs already laid by the host.

In case mom did not do the trick, a honeyguide is born with a needle-sharp beak which it uses to peck the other non-honeyguide hatchlings to death. After a month of care by adoptive parents, a chick loses its menacing beak and leaves the nest.

Honeyguides feed on insects, including the eggs and larvae of bees. They are quite fond of honey and are among the few birds that feed on beeswax.

But honeyguides cannot open beehives. So, they earn their name by guiding other species to bees’ nests they have found, and take their reward after the guided one has broken in.

One cohort is the honey badger (ratel), which, while a badger, looks more like a weasel. The ratel is primarily carnivorous, taking any sort of animal food to be had: birds, small rodents, frogs, lizards, and snakes, even carrion, but will eat fruit and vegetables, such as berries, roots, and bulbs. A honey badger can also be persuaded to bust open a beehive.

A honeyguide will attract a ratel by imitating its grunting sounds or hacking on a tree to simulate the sound of a bees’ nest being ripped open. A honeybird can be quite solicitous, spending up to a half hour trying to cajole a follower.

Having gotten attention, a honeyguide leads the animal on to a known beehive with inconstant maneuvers: flying within 4.5 meters, churring rapidly, fanning its tail and ruffling its wings to signal intent.

Honeyguides have been variously observed attempting to lead a mongoose, monkey, and baboon, but only baboons have been seen following the bird.

In many areas of Africa, the honeyguide is well known for leading human searchers to a honey trove. It is a relationship that may be over a million years old. Honeyguides advertise their readiness to scout to the Yao people of northern Mozambique by flying up close and churring.

Conversely, a Yao may recruit a honeyguide with a distinctive vocalization: a firmly trilled “brrr” concluded with a grunted “hmm.” No other aural sequence is taken seriously by a honeyguide.

Honeyguides recognize the specific information content in the signal. It’s not simply a cue to human presence. It’s a signal that the person will be a good collaborator. ~ English ethologist Claire Spottiswoode

Honeyguides make a big difference to a Yao hunting honey. Left to his own devices, a tribesman finds a beehive just 17% of the time. With a honeyguide, the success rate climbs to 54%.