Vigilant defense is the price paid for holding onto a homestead. However vigorously a bird makes clear that intruders are subject to attack, such persistence is paid in kind with retreat and return within minutes.

Birds are terrific trespassers. Encroachment is constant. The finer the property, the worse the problem.

Some birds allow help to hold their claim. Typically, a younger bird is tolerated: letting the hired beak have a place to roost and forage in return for thwarting incursions.

A mated Florida scrub jay readily shares his territory with up to 6 unmated jays, all of whom help in the property’s defense. The area belongs to the mated pair and any offspring, who may inherit the property.

Sometimes groups defend territory, such as with the white-fronted bee-eater, a group of which will claim several square kilometers of foraging territory.

The territories of colonial birds are necessarily constricted: just one to a few meters at most. Group defense is a norm for colonials. Australian noisy miners are not above killing an interloper into their territory.

Group defense is commonly by birds of the same species, though exceptions exist.

The level of effort for defense is variable, and seasonal. Breeding season brings vigor in defense. Many resident birds, including mockingbirds and cardinals, sing more often when fledglings are becoming independent and dispersing, as this is the time when local population is at its peak. Better to not let anyone get any ideas.

Some birds appear fearless in their ferocity, especially species that are fast fliers and adept at aerial maneuvers. Birds of prey, terns, swans, cranes, and magpies fall into this category. Such aviators don’t hesitate to take on threatening creatures several times their size.

If food supply becomes abundant, which typically is a short-lived phenomenon, vigilance gives way to gorging, both by the property owner and intruders. Conversely, in times of scarcity, territory may give way to getting enough to eat. 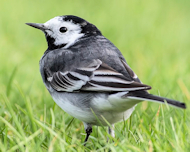 A pied wagtail spends many of his waking hours defending his property from fall until early spring. If food is particularly plentiful, a chase is not worth the trouble. Sometimes a wagtail strikes a practical compromise: letting another wagtail forage in return for security service.

One study found that a wagtail owner alone immediately spotted 60% of the intruders; the other 40% snatched a snack before being chased off. With a satellite, the instant hit rate went to 85%; only 15% grabbed a bite.

With sufficient supply a territory owner could up his feeding rate by 1/3rd by having a satellite helper: more than compensating for the satellite’s wages. When food becomes scarce – not enough for 2 birds – wagtails aggressively evict their satellites.

In a season of severe shortage, a different scenario ensues. A wagtail temporarily deserts his home, joining a flock to forage. He periodically checks his property, for an improved supply of the insects he eats, and to prevent another bird from moving in.

The most common method of seeing an intruder off is song. Alternately, or in addition, posturing and chase are employed. Such displays, including flight patterns, are specific to territory defense. To settle a border wrangle, 2 male hazel grouse might chase each other airborne for a while, then run side by side for as long as 45 minutes. The dispute is settled via stamina.

Physical combat to defend territory is not quite common, but it is also not especially unusual. Vocalizations and displays evolved to show fitness for battle, thus lessening the frequency of physicality.

If battle does break out, it is typically vicious. Property is often a deed to a decent life: worth fighting for at all cost.

A penguin will defend its nest site by banging an intruder with its flippers, along with jabbing and biting with its sharp beak. Both fighters are likely to get bloodied. On rare occasion, two equally matched males will fight to the death over a patch of land.

An especially brutal brawl was seen between 2 European robins. In the fight finale, one bird killed the other. Adrenalized, the victor continued to peck at the corpse, taking out its eyes and puncturing the skull. Then it sat for a while, perched high in a tree, and sang its sweetest song. Whereupon it flew down and went back to mutilating its fallen foe. 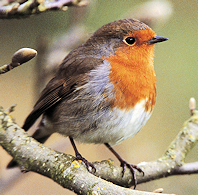 The violence of territorial defense varies, even within a single species. Male English robins see off intruders with song if they can. If not, aggressive negotiation may be pursued.

One English robin, keeper of a fine patch of land, was put on alert by a rival, perched high in a tree in the middle of the owner’s territory, who loudly proclaimed in song that new management was taking over. The owner retorted with his own song.

The newcomer flew to a nearby tree, with the unwilling host in hot pursuit. Another new song / old song contest ensued. And so on for 2 days, throughout the property. The intruder’s siege wore the owner down.

After 2 days, the tired old owner ceased his chase. His song grew softer, until it finally ceased. He shortly thereafter abandoned his land as the new owner took possession.

Another eviction came to blows, for the prize was more than territory. An unmated English robin male invaded his next-door neighbor’s property. The intruded-upon was a male with a mate.

The newcomer burst into loud song, with equally fervent response. After a few rounds of raucous songs, things got ugly. The intruder started furiously pecking the mated male. The 2 birds grappled with claws and beaks in physical combat. After 2 hours of battle, the old owner was much the worse for wear, while the intruder was ready to keep on.

The ailing bird fled the attacker to sit on a high branch and sing a soft, forlorn song. Meanwhile, the land’s new lord sang loudly, flying from tree to tree, establishing the new limits to his domain.

The defeated bird hung around a few days, singing softly, occasionally harassed by the new master. The despondent robin then flew off, never to return.

The hen mated to the old owner remained aloof during the conflict. But she lost no time making her presence felt with the victorious bird, following him about with interest. She later mated with him and reared a brood of chicks.