Memory for ‘what’ and ‘where’ is not that remarkable in the animal kingdom. Even insects can do it. It is the ability to remember what, where and also when an event occurred – referred to as episodic memory – that is generally considered to be a much more sophisticated form of memory and is usually assumed to be uniquely human. ~ English science writer Helen Phillips

Several bird species make an impressive show of caching food in anticipation of lean winter months; demonstrating planning, and rather incredible memory, in remembering literally many thousands of locations where they have stashed their goods. 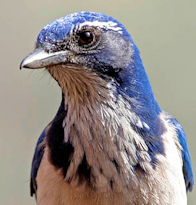 There are 6 species of scrub jay. Scrub jays plan: seasonally caching food so that they have sufficient supplies with nutritional variety.

These jays learn how long a wax worm can be stored and still be edible. They retrieve cached wax worms within their decay expiration date or not at all.

Scrub jays watch where other jays cache food and later steal it. Jays tend to steal from those of lesser social standing. They re-hide their own food if they think there is the possibility of it being stolen.

Jays that have not taken to thieving ways are less likely to recache food than larcenous birds. Projecting its own state of mind, a thief is suspicious of others.

Tropical insectivorous birds are presented an instant feast if they chance upon a colony of army ants during a raid, as the ants drive out ahead of them other insects fearing for their lives. Some birds are smart enough to take chance out of the equation.

The white-whiskered puffbird is one such sharpie. These birds practice bivouac checking: auditing army ant bivouacs at the end of the day, after the ants have fed on a raid.

Army ants regularly alternate high and low raiding activity. Birds monitor the bivouacs of multiple army ant colonies, keeping track of the various colonies’ activity cycle, anticipating when a colony will launch a major raid. This allows them to track the colonies through time, as well as take advantage of the spoils from a colony on the march.

The birds do this even when not hungry, demonstrating planning for the future. Colony tracking requires mental time travel: remembering previous activity patterns and anticipating and planning for future events. Mental time travel has long been considered a mental facility unique to humans.