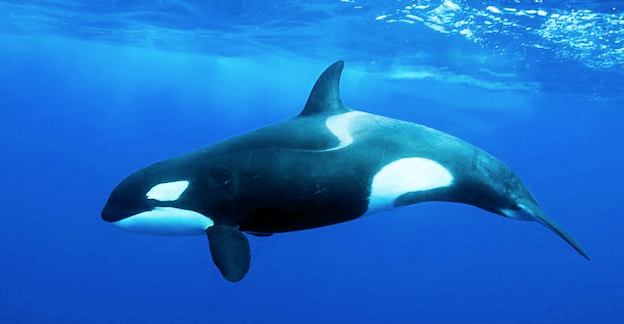 Female orcas hit menopause around 40. Besides humans and elephants, orcas are one of the few mammals that live long past their reproductive years.

Like elephants, orca groups are led by postmenopausal females. Their well-steeped wisdom is appreciated.

Adult male orcas, one of nature’s most effective killers, are mama’s boys at heart: they fare much better when mom is with them. Those whose mother dies are 14 times more likely to perish within a year of mom’s demise. The probable reason is that they love their mothers so much that, for some, the grief of loss is too much to bear.

Both sons and daughters stay with their mothers into adulthood; a closeness unusual for mammals.

Orcas have striking patterns of black and white. Their back side is black, while their belly is striped white with black on the sides and gray saddle patches. They also have white eye blazes. The patterned coloration has various advantages. For one, it may make an orca less recognizable as it moves in for a kill.

Countershading is a common camouflage in many marine species. An object of uniform hue under sunlit skies looks lighter dorsally and darker ventrally. Reversing that pattern lets an animal shed shadows and fade into its surroundings.

The flashy patches break up an otherwise predictable contour of an approaching predator. All told, if not camouflaged, the patterning provokes uncertainty as to what is approaching.

The bodily patterns, particularly the striking eye patches, facilitate social behaviors, such as being able to readily see each other, for traveling and attacking in formation.

More generally, the overall patterning provides a means for visual signaling by body gestures. Males and females have different patterning in the genital area which renders the sexes visually distinct. The differences may be significant in courtship and mating.

Orca courtship behaviors are elaborate. They include chasing and splashing, gentle nudging and stroking, visible male erections, and loud percussive fluke and flipper slapping. For all that, mating takes place quickly between orcas in different pods.

The heads and faces of orcas are so contoured for a streamlined life underwater that they are expressionless. But orcas possess an impressive repertoire of ways to convey their feelings.

Communication is facilitated by orcas having keen eyesight and hearing, adapted for their undersea living conditions. Orca employment of echolocation, along with sight and hearing, provide rich mental images. Orca sense of touch is also exquisite.

Postures and gestures tell much: the direction an orca faces, its mouth movements, the shape of its body. Arching its back and assuming an S-shaped posture, which exaggerates its body size, is a threat display.

A dominant orca typically glances at a subordinate before quickly looking away. Subordinate orcas are more likely to stare.

The whites of orca eyes redden with aggression. Other expressions can be read in their eyes.

Orcas lack vocal cords yet they can produce an astonishing variety of sounds: from clicks to whistles to squawks to siren squeals. Pitch, volume, and timbre vary to convey nuances and import. Orca voices are individually identifiable.

All orca sounds are produced via a labyrinth of nasal passages under the blowhole. Orcas uses recycled air to vocalize; hence no bubbles when an orca speaks.

Provincial orcas speak in the pod dialect learned from mother. Transient orcas live in groups with varying membership from time to time. Their language is more in a state of flux, though the entire population shares a fairly uniform vocabulary.

Orcas are an apex predator, as they lack any natural predators. They commonly hunt in groups. Orca hunting techniques and vocalizations are typically group-specific and passed down from one generation to the next.

Transient orcas hunt wary prey, such sea otters, seals, and sea lions. Their hunting requires stealth, and so their conversations on the job are sparse. Transients talk less when foraging than fish-eating locals, who can chat between bites.

Orca mothers have been spotted teaching their children how to beach themselves and then escape on the next wave. This skill can let an orca snag something near the shoreline, such as a baby sea otter.

As with other cetaceans, orca culture is rich. Besides behaviors learned through imitation, such as various hunting techniques, an obvious display of culture comes in their local vocal dialects.

In the polar regions, orca happily hunt a solitary sea lion they find on a small ice flow. It makes an excellent meal, but the catch is tricky. The sea lion’s sharp bite is to be assiduously avoided.

Several in the orca group simultaneously slap their tails in the water on one side of the floating ice where the sea lion lies, creating a force wave which rocks the ice flow. It can be enough to make the sea lion slip off the ice and into the water.

The sea lion panics and struggles to regain the relative safety of the ice shelf. While in the water, orcas take turns in quick succession ramming the sea lion from the back side, or bite at its tail end. They may blow bubbles about the seal to confuse it.

If a secure purchase can be made on the sea lion’s tail, an orca might fling it in the air and slam the sea lion against the water. Orcas enjoy playing with their prey.

If the sea lion makes its way back on the ice, it will be wave-pounded repeatedly, further discombobulating it. In what may take an hour or more, the sea lion is eventually exhausted.

Once subdued, the sea lion is securely bit by the tail and dragged down into the deep to drown. Dinner is served.