There are 5 families of New World monkeys: Callitrichidae, Cebidae, Aotidae, Pitheciidae, Atelidae. Only night monkeys (aotids) are nocturnal; all others are diurnal.

The smallest monkeys are squirrel-sized marmosets and tamarins, with 26 species in 5 genera. Once wrongly thought primitive, they are instead dwarfs, having adaptively shrank.

Marmosets and tamarins differ mainly by where they reside. Tamarins live on the northwest side of the Amazon River, marmosets on the southeast side.

Callitrichids are all arboreal; eating insects, fruit, and the exudate (gum or sap) of trees. Marmosets rely heavily on exudates. Some marmosets are obligate exudativores.

Callitrichids live in small territorial groups of 5–6 members. They have a unique social organization among primates: cooperative polyandry. Females mate with more than 1 male, but only 1 female is contemporaneously reproductive. Callitrichids are the only primate group that regularly produces twins: over 80% of the time.

Everyone shares the responsibility of carrying the offspring (alloparenting). Older adolescents help with infant care. Males provide as much parental care as females; sometimes more. From an evolutionary perspective, the uncertainty of fatherhood engenders cooperative parenting.

Capuchin and squirrel monkeys are cebids. They are opportunistic omnivores but confirmed arboreals, rarely traveling on the ground. These small monkeys are gregarious, living in groups of varying sizes, with the smaller species preferring larger groups. 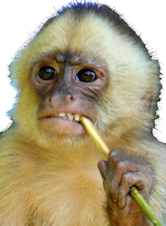 Capuchins are the size of a house cat. They live in a troop of 10 to 40 members: related females and their offspring, along with several males.

Capuchins have a social hierarchy with a dominant male. Some tribes have a dominant female too. Mutual grooming and gossip maintain social order.

A capuchin prefers an impressively heavy rock for cracking hard-shelled palm nuts. They carry the nut and stone to a suitable flat rocky surface. Stone anvil sites are repeatedly employed, so much so that shallow bowls are worn into the anvil spot from use. Preferred anvil stones are river rocks, carted to the site where the anvils are used, sometimes by several capuchins at a time. 1 of 2 techniques are preferred: repeated pounding, or picking up the stone to chest level, and dropping it on the nut.

Capuchins throw objects, sticks or otherwise, either agonistically or in play.

Capuchins master tool use and construction through trial and error. They use wooden limbs to pound on rotten logs, thumping out grubs. Sticks and twigs are crafted to make a pointed prod for accessing larvae and insects from tree crevices. Capuchins also use stones as cutting tools.

To ward off mosquito bites when the pests are in season, capuchins crush millipedes and rub the residue on their backs as an insect repellent.

As gregarious creatures, capuchins have mastered the social contract of empathy and reciprocity, with a demonstrated sense of fairness in transactions.

A male needs male allies to become the dominant male of a group with mature females. The alpha male sires virtually all offspring in a group that are not his direct descendants.

The males who assist the alpha male in gaining and preserving sexual dominion must typically delay breeding until the alpha male’s daughters have matured.

Infanticide by alpha males is the primary cause of infant death. Females socially support the current alpha male, thereby preventing disruptive takeovers that could lead to infanticide. Male offspring of the alpha male enjoy a social advantage as juveniles. 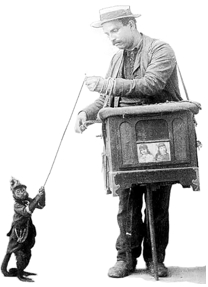 Capuchins can be trained and are fine actors. Capuchins are best known as the dancing monkey belonging to the organ grinder, though, as that venue has been abandoned, show-biz capuchins have been cast in numerous movies, though always typecast as being up to some monkey business.

When presented with the mirror test, capuchin females pose and make friendly gestures at themselves; their social graces come to the fore. Males look at themselves, then freak: showing confusion or distress. It is bizarre to suddenly see a twin you didn’t know existed, and one who looks like a potential rival. 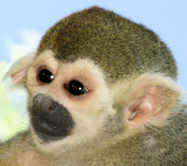 Capuchins are messy eaters. They rip the forest apart as they move through the trees foraging. They’ll even grab a small squirrel monkey for a meal upon occasion.

Despite that infrequent danger, capuchins and squirrel monkeys often feed in proximity. Their diet is similar, though squirrel monkeys must content themselves with insect grubs found on branches, as they cannot rip the bark off trees looking for insects like capuchins can.

The big benefit of the capuchin association comes in hanging out on the tree branches below, catching the numerous bits of food that their larger cousins carelessly drop.

Squirrel monkeys, small as they are, band together, often traveling in troops of 40 or more, though sometimes congregating in a herd of 400 to 500 individuals. There is safety in numbers; not only from predators, but also from bullying by larger monkeys that might otherwise try to shove them aside for the finer foraging.

Squirrel monkeys are complex communicators: incorporating 25 to 30 distinct calls (to human ears), with various meanings by context. Some calls are further elaborated or nuanced by postural displays.

Squirrel monkeys also communicate chemically, with scents from different sources: urine, scent glands on their chest, or from their nasal passage. A squirrel monkey may rub its nose on something, or sneeze into its hand to physically transfer that scent. A male can tell whether a female is sexually receptive by restraining her and sniffing her genitals. 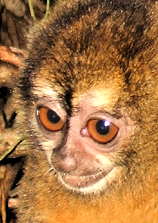 Night monkeys are the only truly nocturnal monkey. Their vision has adapted to this lifestyle: monochromatic (no color vision), and better spatial resolution in low light. Night monkeys re-evolved nocturnality from diurnal ancestors.

Night monkeys live near the forest canopy, walking branches on all fours, though they are skilled leapers: capable of crossing canopy gaps as large as 4 meters. Territories are defended by scent marking and vocalizations.

Night monkeys are monogamous, with only 1 infant born each year. A mother carries her infant for only its 1st week. Afterwards, the father is the primary caretaker. If dissatisfied in her marriage, a female divorces her husband and finds another mate.

The 40 species of pithecids include titis, sakis, and uakari monkeys. Pithecids have medium to long fur in a wide range of colors. Many have contrasting color patches, particularly on the face. This helps accentuate facial expressions.

Most pithecids live in the trees of the Amazon forest, from low-lying swamps to mountain slopes. They are generally herbivores: mostly fruit and seeds, though some species sample small insects.

Sakis and titis are monogamous. They live in small family groups.

Uakaris and bearded sakis are polygamous. They live in larger groups, with 8–30 members. Each group has multiple males which establish their own social hierarchy.

Howler monkeys are large tree dwellers; slow, deliberate leaf eaters. They almost never leap from branch to branch. When they move, they leisurely walk on all fours, or swing slowly, arm over arm, though tree branches. At rest, they hold themselves onto a branch using their strong prehensile tail. 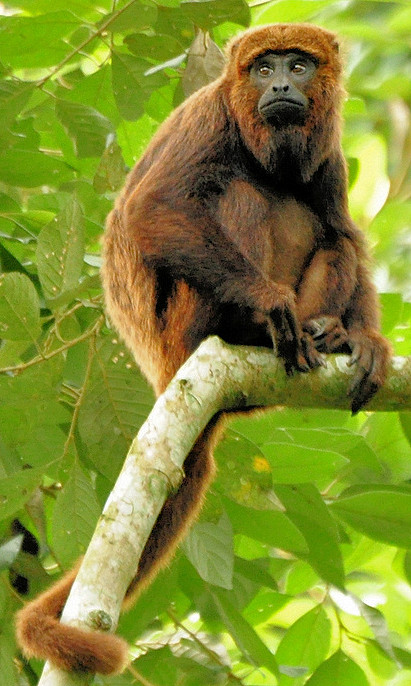 Howlers live up to their name by the loud calls, which can be heard for kilometers. The point is maintaining territory. Howler groups contend over a new territory via vocal battle. The louder, more persistent group wins. Physical fighting is rare. 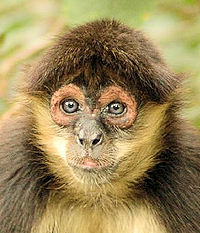 Spider monkeys are about the same size and weight as howler monkeys but are more active and acrobatic. They make spectacular leaps between trees.

Spider monkeys have strong prehensile tales, along with exceedingly long limbs. A spider monkey can hang from a branch by its tail and pick an otherwise unreachable fruit or take a drink from a pond below.

Spider monkeys are largely frugivores, though leaves, flowers, and insects make up part of their diet.

Spider monkeys live in the rainforest canopy, in groups of up to 35 members, though they split up during the day to forage.

Spider monkey society is sexually segregated. Males and females live separately for much of the year.

Males are friendly to each other. They spend hours in mutually grooming and fall asleep hugging. Contrastingly, males are aggressive toward females, attempting to dominate them.

Males typically forage in groups, while females often forage with just their infants. Males may chase females away from fruiting trees, relegating them to less nutritious leaves. Only when food is scarce do males and females forage together.

Spider monkey communications are quite complex. They produce a wide variety of sounds: from a horse-like whinny to barks to prolonged screams. Spider monkeys are one of the most intelligent New World monkeys.

Humans have long hunted spider monkeys as a food source. More recently, logging and land clearing have drastically reduced their forests. Spider monkeys will soon be wiped out. 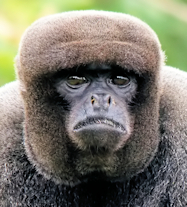 Like spider monkeys, woolly monkeys prefer high elevations, living in cloud forests and mature tropical rainforests. Woolly monkeys are among the largest New World monkeys, with a thick prehensile tail and arms about as long as their legs. As their name implies, woolly monkeys have a thick and woolly fur.

Woolly monkeys live in a troop of 10 to 45 members, though they forage in small groups of 2 to 6, thus reducing food competition among individuals. Woolly monkeys are largely fruit eaters, supplemented by leaves, seeds, flowers and invertebrates.

Each troop is governed by an alpha male. Social hierarchy is by age, sex, and, for a female, her reproductive status. Play establishes bonds and maintains relationships, as well as reinforcing the social hierarchy.

Woolly monkeys are promiscuous. Dominant males get the most mating in, with multiple females. Likewise, females will mate with more than 1 male.

Females leave their natal group upon reaching maturity. With such a promiscuous lifestyle, this is the only way to prevent inbreeding.

Woolly monkeys are complex communicators, using diverse media: visual, vocal, olfactory, and tactile. They may show affection or aggression and everything in between.

Sadly, like spider monkeys, woolly monkeys are highly endangered. Captive prisoners are being kept and bred in a token effort to “ensure” species survival. The cruelty of men knows no bounds, as they show scant sense when it comes to respecting life.