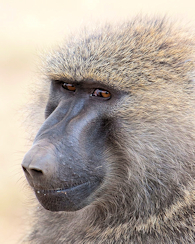 The largest Old World monkey, baboons live mostly in East Africa, with some in the Middle East. There are 5 species of baboon.

(The chacma baboon is found in southern Africa. The Guinea baboon resides in far western Africa. The hamadryas baboon occupies the heights in the Horn of Africa (the peninsula of central eastern Africa). The olive baboon inhabits in a wide range of north-central African savanna. The yellow baboon lives in the savannas and light forests of south-central and eastern Africa. Baboon classification is controversial. Some contend there are only 2 species: the hamadryas and savanna baboons, which have subspecies.)

4 baboon species prefer the savanna and other semiarid habitat, whereas the hamadryas baboon prefers a scenic view: living on the cliffs and in the hills along the Red Sea; dispersing for day foraging on the ground, but coming home to the cliffs at night, where they sleep and enjoy leisurely meals.

Baboons are stunningly strong. They are built for life on the ground: with long arms that let them walk on all fours, with their shoulders and head held high, allowing them to scan the land without rising on 2 legs.

Baboon hands, much like humans, are adapted to digging up roots and bulbs. Baboon feet are flatter than other monkeys, giving them good ground stability at the sacrifice of tree-climbing agility. Nonetheless, baboons pull themselves into the trees to sleep at night.

Baboons are big eaters. Unsurprisingly, they are opportunistic omnivores, consuming a wide variety of foods.

A small antelope or gazelle is a meaty catch. Baboons may hunt as a group: some acting as drivers of prey, into the trap of others that are waiting.

While baboons don’t make stew, they do appreciate taters. Baboons dig tubers out of the ground, a welcome supplement when seasonal fruit is scarce.

Among savanna baboons, the biggest and fiercest males dominate a troop that may run to hundreds, acting as protectors and mediators in social disputes.

A group within a troop has several adult males, and about twice as many females, along with their offspring.

Females have their own social hierarchy. Offspring generally share the same rank as their mother.

Females live their lives within the same natal group. Young males leave their home troop when they reach sexual maturity.

The olive baboon is named for the color of its coat. It is the widest ranging of all baboons: extending through much of middle Africa almost from coast to coast. Olive baboons inhabit savannas, steppes, and forests.

Though olive baboons have social stratification, choice of collective troop movements are made democratically: majority rules. Such democratic decisions arise only when the conflict in directions involve widely divergent paths; otherwise differing baboons compromise about which way to go.

While savanna baboons have a matrilineal hierarchy, the hamadryas is unusual in having a strictly patriarchal society. Correspondingly, savanna baboon females stay with their natal group. In contrast, hamadryas males have continuing relations.

The hamadryas have an atypical 4-level society: harems, clans, band, and troop. Most social interaction is within the smallest group: a harem is a single dominant adult male and up to 10 adult females, which the male guards. A harem may have a younger subordinate (follower) male, often related to the leader.

2 or more harems often unite into a clan. The dominant males of a clan are commonly close relatives, with an age-related dominance hierarchy at the clan level.

2 to 4 clans form a band of up to 200 baboons. Bands typically travel and sleep as a group.

Bands are insular. Males and females rarely leave a band. Interaction with other bands, particularly by juveniles, is discouraged by dominant males. Bands often have solitary males that are neither harem leader nor follower, but which stay with the band.

Several bands may come together as a troop. Troops often share a cliff-face for sleeping accommodation.

Related males of the same clan respect the social bonds of their kin. Otherwise, males sometimes raid harems in an aggressive takeover of its females. Infant baboons may be taken as hostages during such fights.

Females have a say as to their harem. A female’s preference for her male is heeded by his rival. But the less a female favors her harem male, the more likely a rival will attempt a takeover.

Hamadryas do not have a dominance hierarchy like savanna baboons. The males won’t tolerate it. Aggression among adult hamadryas males precludes male-male bonding and overrides extensive sociality. By contrast, some females are socially active and have strong bonds with the harem male.

Younger follower males may start their own harem by seducing young females into following them. Alternately, a male may take a female by force, though that does not necessarily bode well for a long-term relationship.

Baboons converse with considerable vocabulary and syntax, as well as subtle, and not so subtle, gestures. There are about 3 dozen basic baboon vocal calls, including a wide range of barks, grunts, screams, and alarm calls.

Baboon body language is extensive: staring, lip smacking, and a variety of body poses. Belligerent baboons display degrees of aggression. If a threatening stare doesn’t make the point, a baboon will try an “open-mouth” threat that starts by raising the eyebrows to show the whites of the eyes, followed by baring the teeth. A threatening yawn reveals enormous canine teeth, making an impressive warning display. At higher hostility, a baboon makes his hair stand up, voices verbal threats, and slaps the ground for punctuation.

Cowed baboons put on a fear face to back down: a wide smile that says “don’t hurt me.”

Baboon vocalization can be subtle, with individual styles that reveal emotional state and convey social context. Baboons gossip. Baboons talk about objects and events, indicating their feelings about the subject.

Alarm calls identify predator type. Alligators are referred to differently than lions. Such cries also identify the caller and context: whether of concern or a reported sighting.

Geladas are so closely related to baboons that their exclusion from the baboon genus remains controversial. Geladas vocalize while lip-smacking. These “wobbles,” as they are called, are structurally similar to human speech. Geladas even sound like a human talking, as their rhythmic qualities, determined by opening and closing the mouth, are the same.

Baboons were assessed on their orthographic processing ability: visual memory of words from their spelling (in a character-based language like English, as contrasted to a pictographic system like Chinese). The results were impressive.

Baboons were able to learn not only a specific list of words, but also to predict whether a new letter sequence was a real English word or not. ~ French psychologist Jonathan Grainger

In the alpine grasslands of eastern Africa, geladas tolerate Ethiopian wolves in their midst. Sensing comity, the wolves ignore potential meals of baby geladas in favor of rodents, which are more readily caught when the monkeys are present. This is the onset of domestication. (By contrast, geladas flee when they spot feral dogs, which show no decency toward the monkeys.)

You can have a wolf and a gelada within a metre or 2 of each other and virtually ignoring each other for up to 2 hours at a time. ~ Indian primatologist Vivek Venkataraman

25 MYA, an Old World monkey speciated into the first ape. Tectonic activity in the Great Rift Valley during the late Oligocene may have triggered the evolutionary divergence.