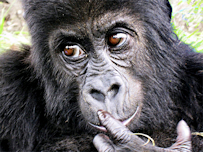 Gorillas are the largest primate. Adult males average 157 kg and stand 1.7 meters. Dominant silverbacks may reach 230 kg and 1.8 m. Females are 1/3rd smaller than males and about half the weight.

Gorilla sight, smell, hearing, and touch are comparable to humans, but their sense of smell is decidedly better. Gorilla vocal cords are different, limiting their vocalization versatility. Gorillas tend to be quiet, though they bark when curious, hoot when alarmed, roar when upset, mumble softly and belch when content.

If uncertain, a gorilla pulls its thin lips against its teeth, much as a person would. The tongue may peek out of tight lips when concentrating, as humans do. A playful display is made by relaxed eyes and a casually open mouth without showing teeth.

Gorillas gesture. A slap displays displeasure. Submission is shown by a compacted body, arms folded in front or over the head, like people do when they feel defeated.

Males beat their chest to show aggression, but also as a signal to maintain contact at a distance. The hollow sound of chest thumping may be heard a kilometer away.

A male gorilla reaches maturity at 10–13 years. At this age, it grows a thick crown of head hair. The hair on its chest falls out. The hair on its back turns silvery gray. Hence the term silverback for the dominant male of a troop.

Younger males are called blackbacks. All young and female gorillas have black hair.

A vegetarian diet has a lower concentration of nutrients, requiring a lot of gut room. An adult male may eat 23–30 kg of food a day.

Favorite gorilla foods include bamboo, wild celery, and blackberries. Bracket fungus is a treat, and so well-liked that its discovery is likely to raise a ruckus if the find is spotted by more than 1 gorilla.

Plant leaves, branches, stems, roots, and fruit are all on the menu, depending upon availability. Termites and ants supplement the diet. Gorillas seldom drink water, as their diet provides enough liquid.

Gorillas are slow, deliberate eaters. They carefully examine their food, choosing the best fruit and leaves.

Gorillas use their long fingers to peel away the hard outer parts of plant stems so they can eat the juicy inner pulp. Gorillas like to hum, grunt, or smack their lips while eating.

A particularly tasty morsel may prompt a gorilla to distance itself from the group before eating, to avoid having it stolen or having to share. Otherwise, the natural sounds of consumption contentment would give a gorilla away.

Like chimps, gorillas knuckle-walk, which saves wear and tear on the hands. The backs of their knuckles are protected by thick calluses.

Gorilla and human hands are similarly shaped. Like chimpanzees, gorillas have prehensile feet.

Like humans, infant gorillas have baby teeth which fall out and are replaced by an adult set. Gorillas are also like humans in having a 4-chambered heart, and the same blood types (A, B, AB, O).

While they spend a lot of time on the ground, gorillas make a night nest in the trees to sleep in; a task that typically takes a minute or 2 for a skilled builder; up to 5 for the less adept. For hygienic reasons, gorillas never use the same nest twice. Gorillas may defecate in their nests at night but their dry manure doesn’t stick to their fur.

Gorillas lead nomadic lives. Each day they travel to a new area of their home range. Constant movement avoids overgrazing. The general pattern is to forage a ways away: from a few hundred meters for mountain gorillas to several kilometers for lowlanders.

Gorillas are not territorial. Troop ranges often overlap. Lone males may have a home range that overlaps that of several troops.

Though they prefer not to run into each other, 2 groups may feed side by side without conflict. In such situations, adults tend to ignore one another, thought juveniles of the 2 groups may play together.

Gorilla troops number 2 to 30. Troop hierarchy has at its apex a dominant silverback male, overseeing a harem of breeding females and their young.

A troop acts as a family. A silverback will give his life, if necessary, to protect his troop. This social structure makes for an orderly society. Violations of social mores are dealt with swiftly and firmly. The dominant silverback rules. If 2 are fighting over food, a stern stare from the silverback ends the conflict.

Females and males may leave a troop when they mature. Gorillas are careful to avoid inbreeding. A young male typically lives alone for several years, until able to seduce a female into joining him to form a new group.

Only the dominant silverback mates with the females in his troop. His troop’s offspring are his own. When a new silverback seizes control of a troop, or takes in a new female, he may kill infants sired by other males.

Chimpanzees often employ sexual behavior for bonding among group members. Gorillas are not so inclined.

Gorillas mate only occasionally, any time of the year, as the tropical climate provides food year-round. The female menstrual cycle generally follows the lunar cycle, as it does with women. Gorilla mating usually occurs mid-cycle, close to ovulation. Females initiate mating more often than males.

Gestation is 8 1/2 months; a couple of weeks shy of human gestation. After birth, a mother licks her newborn clean, and often eats the placenta.

Females bear a single offspring. Twins are rare: 1 in 110, as contrasted to 1 in 80 for humans. A female bears a child once every 3 to 4 years; sooner if baby does not survive.

Gorillas are attentive, caring mothers. Mothering is a learned skill. As gorillas are polygynous, mothers are the primary caretaker.

A female may have only 3 to 4 progeny that survive to adulthood. The first years are the most dangerous. Nearly half of offspring die before reaching 6 years, from disease, hardship, or injury. Most fatalities are infants less than a year old. In the best of times, gorilla populations grow very slowly.

One silverback may challenge another for troop domination. They beat their chests, grunt, howl, and break off tree branches to show their determination. Before leaving his home group, a young male may challenge the troop leader, almost never successfully.

Seldom does a challenge come to bites or blows. Intimidation most often does the trick. A gorilla concedes defeat by staring at the ground or leaving the scene.

Gorilla troops generally lead a relaxed life. Mornings and afternoons are spent foraging and feeding on favorite foods. In the meantime, adults nap in a nest while youngsters play. Young gorillas like to tickle each other, wrestle, play follow-the-leader, king-of-the-hill, and tag. All gorillas in a troop, even the silverbacks, play gently with babies.

Females reach reproductive maturity around 8 years; males about 10 years. Gorillas have a longer adolescence than any other primate save humans.

Grooming consumes a fair portion of free time, though gorillas are not as tactile as some other primates. Gorilla babies are in almost continuous contact with their mother. A mother grooms her offspring. Adolescent friends sometimes groom each other. Adult females groom the dominant silverback, though without reciprocation. Otherwise, grooming between adults is rare.

Gorilla life is typically idyllic in its peacefulness. Disputes do arise from time to time, however short-lived.

Gorillas throw objects agonistically. At one zoo, a female gorilla would frequently strip a branch from a tree, sharpen a point at one end with her teeth, and chuck the spear at a disliked caretaker.

Gorillas can creatively employ tools. One female was observed sitting on a stump digging herbs with a stick. Another tore a branch off a tree to help gauge water depth as she waded into a deep pool.

Overall, gorillas are not big tool users, as there is little need. Most everything needed is at hand. Nest-building is about the only manipulative skill that a gorilla regularly practices.

As with chimps, female gorillas tend to use tools more often than males. Tool tips are shared. Mothers train their young for 3 to 5 years on a variety of matters, including tool use.

Human researchers long wrongly considered gorillas a lesser intelligent primate, especially compared to chimpanzees. This may have been because they are more gentle, shy, less aggressive, and vegetarian.

Gorillas flunked the mirror test. The gorillas didn’t even look. The researchers were stumped for quite some time, considering the complex social structure that gorillas have.

Finally, it dawned upon the dim humans that gorillas are shy of making sustained eye contact. For a gorilla, staring is an act of aggression. A quick glance at a mirror image, seeing another gorilla, satisfies a gorilla of a presence. Further curiosity about the mirror image is curtailed out of politeness.

Koko has some predisposition to think and analyze. The ways in which she learns about the language are similar to the ways human infants experiment with language, particularly deaf children learning the same language Koko is acquiring. Koko has a grasp of the underlying structure from which signs are generated. ~ American psychologist Francine Patterson

Koko became a famous gorilla. Born 4 July 1971 at San Francisco Zoo, Koko was taught sign language a little late: beginning when she was 1 year old. Koko came to understand more than 1,000 signs of sign language, and about 2,000 words of spoken English.

Koko invented new signs to communicate novel thoughts. Upon seeing a ring on a human finger, Koko had no word to point it out, so combined finger and bracelet to describe what she saw. The first time Koko saw a duck on a lake, she signed “water-bird.” Melon juice was described as “fruit-drink.”

The essense of Koko’s humor is her ability to diverge from norms and expectations in a recognizably incongruous manner. Her humor taps in various ways her capacity for displacement, a cardinal attribute of symbolic communication. These capacities are further confirmed by a number of Koko’s other creative uses of language. ~ Francine Patterson

Having been reared by humans, without normal gorilla social inhibitions, Koko readily passed the mirror test, showing that gorillas possess self-recognition, though they would be too shy to show it in the wild.

Koko also played with dolls, treating them maternally: carrying, cradling, kissing, putting a doll’s face on her nipple to suckle.

A grieving adult female gorilla in the wild, who had lost her 1-month-old infant, fashioned a doll from vegetation and treated it with the same care as she had her child. Chimps are also known to indulge in making and playing with dolls; one instance involved a young male.

Koko shares many of our mental experiences. When she looks at the world, she is conscious of her surroundings and, to a degree, of the laws that govern them in much the same way that we are conscious. ~ Francine Patterson

Gorillas share their habitat with hundreds of animal species, but direct interactions are few. Gorilla lifestyle, including vegetarian diet, is ecologically idyllic.

Gorillas are among the most powerful creatures. Few predators will attack a gorilla troop, excepting leopards and humans. A leopard my occasionally stalk and kill a young or weakened gorilla.