Good hygiene is essential to health and a successful social life. Insects do not foul their nests with fecal wastes. Even young bees that do not otherwise leave the hive make defecation flights. Ants use designated toilets. Many animals bathe when they can. When sickness strikes, many seek a cure.

Grooming helps prevent disease. Without grooming, pigeons become speckled with lice. Cows that cannot groom themselves have 4 times the ticks and 6 times the lice. 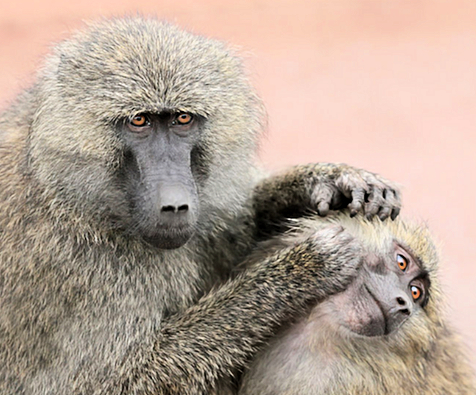 Insects spend a lot of time grooming, especially their antennae. This cleans both environmental pollutants and their own secretions. For an insect, constant cleaning is essential in maintaining optimal olfaction. Sensitive smell is essential for food foraging, sensing danger, and finding a suitable mate.

Feathers require special attention to keep clean. Birds have elaborated grooming procedures to remove dirt and parasites, to re-oil feathers, and to tuck feathers back into their proper places. Disheveled feathers can present a serious problem in failing to provide adequate insulation. Some birds preen as often as once an hour.

Rodents spend long periods going through a fur-cleaning routine as complex as the preening of birds. Each species follows a set pattern that is inborn for its kind.

Antelopes evolved a dental comb: a specialized tooth structure which is a built-in tool for grooming away ectoparasites. Grizzly bears were not born with a comb, so they groom their muzzle and face by combing them with barnacled rocks.

Howler monkeys consume up to 25% of their caloric intake batting flies away. The tails of many animals, notably ungulates and elephants, serve as fly swatters.

Meadow voles like to smell good to their mate. Males put extra effort into grooming their coats when they smell their mate nearby. For finding a mate, good grooming is crucial. Female voles strongly prefer a clean male with a healthy scent. That maxim applies to many mammals.

Grooming is also important for psychological health; a self-reassuring behavior that gives a measure of contentment.

For gregarious species, hygiene is a social activity. Mutual grooming is a bonding activity for many social species, notably birds and primates, who spend considerable time grooming each other. Grooming alliances are common among simians. Some chimpanzees even clean their own and others’ teeth using twigs.

Ants, bees, and other colonials with large populations face a considerable risk of contagious disease outbreaks. Befitting their eusocial lifestyle, they have a social health care system.

Ants do not avoid ill colony members. Instead they lick the sick to remove the pathogen from the exposed ant’s body. This does allow an infectious agent, such as a fungus, to spread throughout the colony. For remedy at such times, ants eat foods rich in hydrogen peroxide. By such health care, colony members vaccinate themselves. The net effect is to increase a colony’s capacity to fight pathogens.

Many species know how to self-medicate. Bumblebees with parasites preferentially forage on flowers high in anti-parasitic compounds, notably iridoids, which plants use against herbivores and microbes.

Macaw parrots get serious indigestion from some of the seeds of the fruit they eat. The problem is the bitter, poisonous alkaloids in the seeds, designed to prevent animal ingestion. Macaws find and consume medicinal clay that tamps the toxins to a tolerable level.

Capuchin monkeys are familiar with a wide range of medicinal plants, including the leaves of the pepper plant (an antiseptic); the fruit of the wild nutmeg, which has antimicrobial properties; the detoxifying protium plant; and the fruit plant Eugenia nesiotica, which is used to purge parasites. This knowledge is culturally transmitted through generations.

Chimpanzees know numerous medicinal remedies and their proper application. Chimps treat intestinal worms by ingesting the leaves of plants with anti-parasitic compounds, such as wild sunflower. An infected chimp will go first thing in the morning, before eating, and carefully choose young leaves. The selected leaves are rolled and swallowed whole, as if taking a pill. As chimps know, the remedy is more effective on an empty stomach. The leaves are bitter if chewed, and greatly lessens their potency.

Contrastingly, the leaves of the bitter leaf plant are poisonous, but the pith within the stems are highly toxic to parasites while doing no harm to a chimp. An infected chimpanzee knows not to eat the leaves. Instead, it ingests only the stems.

Like other animals, chimpanzees take medicinal plants only when infected. It may seem none too surprising that chimps are so aware, but even insect larvae know when they infected and medicate themselves. Woolly bear caterpillars carefully select and consume pomegranate leaves, which are rich in an alkaloid that kills parasitic fly larvae laid inside their abdomen.

Fruit fly eggs hatch into rotting fruit, where they transform into larvae on their way to adulthood. Rotting fruit naturally ferments; a health hazard fruit flies evolved to handle by rapid detoxification.

Parasitic wasps are prone to lay eggs into fruit fly larvae; a fatal fate for a fledgling fruit fly. But fruit fly larvae know when they are infected. The larvae seek out high alcohol-content fruit, imbibing the boozy fruit to kill the parasites.

Fruit fly moms look out for their little ones by preemptively laying eggs into alcohol-laden food if a parasitic wasp is spotted in the neighborhood. This precaution protects larvae when they hatch.

Wasp-exposed flies lay ~94% of their eggs on ethanol food. This behavior persists in their offspring, even though the offspring never had direct interaction with wasps. Environmentally triggered memories of parental experiences are inherited. ~ American geneticist Julianna Bozler