The diversity of mating systems is an evolutionary consequence of several factors, ranging from the spacing of resources, genetic relatedness, and the odds of offspring survival under various conditions.

Monogamy is the state of having a single mate. In contrast, polygamy involves multiple mates. The common form of polygamy is polygyny, where a male mates multiple females.

In polyandry, a female mates with more than 1 male. Polyandry is rare because males typically can make the most of their reproductive potential by having multiple mates, or at least one to oneself.

When practiced, polyandry can be exhausting. The marsupial mouse  is a small shrew-like marsupial endemic to southeast Australia.

Males mate with many females in marathon sessions. The task is so taxing that all mating males die before their young are born.

A female stores sperm in a specialized container in her ovary. She does not ovulate until the end of the breeding season. Her brood is typically sired by several fathers.

The typical biological goals of male and female differ at least somewhat. Males, able to sow their seeds far and wide, have an innate preference for quantity over quality. As bearer and caregiver, a female is more quality oriented. This innate conflict between males and females affects mate selection and parental care.

A female sage grouse picks a mate from a lek. Once mated, she has no need for the either the male or his territory. She leaves to rear her young alone.

A lek is a gathering of males for competitive courtship display; a marriage market. During breeding season leks may be a daily occurrence.

In a lekking reproductive system, males provide no resources to females or parental care for their offspring. Species adopt leks when females are dispersed, and when males offer little more to the females than the prospect of a decent genetic package. In some species, the males at a lek are related.

There are 2 types of lek: classical and exploded. In a classical lek, males gather within sight of each other. Physical contests are a frequent mating ritual, such as with shorebirds and game birds. Peacocks lek to display their tails.

Freshwater African cichlid fish lek for a construction contest. Males build sandcastles that can take up to 2 weeks to build. Lekking males with tall mounds win a mate.

Exploded leks rely on vocal displays. A lek may be more geographically dispersed.

The voice box of a male hammer-headed bat takes up more over half its body cavity. In breeding season, male bats gather for several hours at dawn and dusk, honking for females to fly by and pick a mate.

Túngara frog males aggregate into a choral lek and croak for sex. The larger the chorus, the more females approach. Fortunately for the frogs, frog-eating bats, which pick up on the chorus calls, are less likely to attack a lek than soloists. 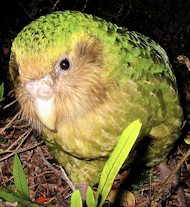 Kakapo are one of the longest-living birds, with an average life expectancy of 58 years, and a maximum of ~90 years.

The Kakapo is the heaviest and only flightless parrot: herbivorous, nocturnal, a low basal metabolic rate, quite sexually dimorphic, no paternal offspring care, and the only parrot with a polygynous lek mating system. Kakapo males position themselves kilometers apart and lek with booming calls.

Kakapo are on the cusp of extinction. 82 MYA, New Zealand broke off from Gondwana; 1 of 2 supercontinents at the time (the other was Laurasia).

The kakapo speciated ~70 MYA. Having no predators, the parrot lost its ability to fly.

Polynesian and European colonization introduced kakapo predators: rats, cats, stoats, and ferrets, which nearly wiped the kakapo out. Early conservation efforts by humans, from the 1890s into the 1980s, were ineffectual. More recent plans have only slowed the kakapo’s inevitable demise. As of spring 2018, fewer than 150 kakapos were alive.

A mung is where females congregate for males to pick a mate. Yellow-spotted millipedes mung.

The limited signal lekking reproductive system presents biologists with a paradox: how females can tell the best mates. Consistent female choice for a valued trait should erode genetic variance, which removes the genetic benefit of choice. Further, hypothetically, males could cheat: if courtship displays confer no survival advantage, a good show signifies nothing.

Another theory explains the paradox by treating a fine display as an honest signal of virility and robustness: croaking well means you won’t croak easily. This theory at least confounds the charlatan speculation. The mystery remains as to mate selection and genic quality, but the system works.