Birds lay eggs which are incubated outside the female’s body. The young are often fed by laborious food foraging. Incubation and infant feeding can be done by a male or female but are more effective if both parents are involved.

As rearing a clutch is demanding, ~90% of bird species are monogamous, at least for the duration of bringing up a brood, if not for life. As with other monogamous animals, there is often genuine affection between avian mates. Pair-bond behaviors, such as mutual preening, maintain a loving relationship.

The largest exception to monogamy comes when hatchlings can quickly feed themselves. Precocial birds, such as chickens, ducks, and geese, tend to polygyny because hatchlings are covered in down and capable of being led to food. Males add little to that situation, as contrasted to altricial offspring, which need the foraging efforts of 2 birds if hatchlings are to survive.

Females may choose males because of the resources they defend, often territory. Even if a male does not directly contribute to an offspring’s care, his defending the nest against predators or intruders of the same species is helpful.

This does not necessarily lead to monogamy. One male may host several female nestings in his territory and look out for them all.

The great reed warbler is migratory. Males arrive at the breeding grounds before females and stake out territories. The females are attracted by the quality of a male’s real estate. A successful male may nest multiple females in his territory. Alas, a polygynous male may not live up to his advertising. 2nd- and 3rd-arriving females have less breeding success. An already-mated male may deceive follow-on females: placing them in reed beds in his large territory that hide the different mates from one another.

A male pied flycatcher defends multiple territories simultaneously, placing a female in each, deceiving his mates that each pairing is monogamous. The male may benefit, but the female is worse off for not having chosen an unmated male.

Males may adjust the amount of care they give offspring depending upon genetic relatedness. Dunnock males feed their nestlings more when they are the likely father.

Both starling parents care for their young. While the pair are socially monogamous, starlings are not sexually exclusive. 3 or 4 males may be fathers of a single brood.

Climate affects an avian female’s choice of mate and her fidelity. Female lark bunting preferences vary considerably from year to year, depending upon climactic conditions and associated assessment as to what male traits may help ensure healthy offspring.

The more that climate appears unpredictable, the more inclined a female is to infidelity, as the improvement in genetic diversity gives her better odds of lasting reproductive success.

Boobies were named for their fearlessness, which meant that mariners could easily capture them. Instead of giving the birds credit, the Spanish named them bobo: slang for stupid. So much for sailor smarts.

The blue-footed booby lives in the eastern Pacific, from southern California to northern Peru, and on the Galápagos Islands. 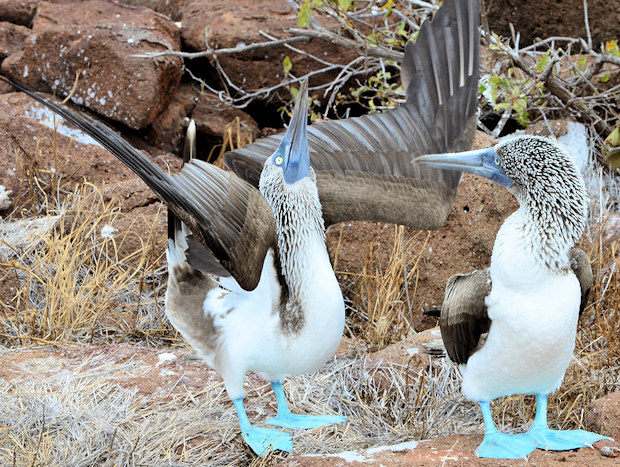 Booby bills are sleek; their bodies cigar shaped. Booby wings are long, narrow, and angular: perfect for circling high above the sea, looking for shoals of fish, and schools of squid. Once a prey is sighted, a bird folds in its wings and plunges headlong into the water; its bill a missile honing in.

If an attempted snag is unsuccessful, a booby may swim in pursuit. Blue-footed boobies can also dive from a sitting position on the water’s surface.

Since the blue-footed booby dives headlong into the water for its meals, its nostrils are permanently shut. The bird must breathe through the corners of its mouth. Boobie skulls have special air sacs that protect their brains from the severe impact of hitting the water at 97 km per hour.

A booby may hunt alone, in pairs, or among a flock. A social outing may comprise a dozen or so boobies. When a lead booby spies a fish shoal, it signals the group and they all dive in unison, their bodies a synchrony of arrows.

Male and female blue-footed boobies fish differently. This may explain why blue-foots, unlike other boobies, raise multiple chicks.

A male blue-foot is slightly smaller, but with a longer tail. This enables males to swim in shallow waters as well as deep. The larger female can carry more food.

When fishing for themselves, boobies tend to go alone or in pairs; usually in the early morning or late afternoon. They eat while still underwater.

Hunting groups head out midday to forage for takeout. Both male and female boobies feed their chicks through regurgitation.

Boobies nest in colonies but have a highly developed sense of territory. Many ritualized displays are used to signify and defend individual turf within a large breeding colony, including head nodding and jabbing.

Courtship also involves a whimsical-looking dance that is anything but. A male raises his feet, one after the other several times, then gives a sky-pointing gesture: wings extend horizontally and toward the tail, raising its bill and emitting a long, drawn-out whistle.

If a female is interested, she responds similarly. The 2 blue-foots dance together.

Both male and female blue-footed boobies are choosy about their partner. The one trait they fixate on is how blue their potential partner’s feet are. The best blue is turquoise. It comes from extracting the carotenoids in the fish they eat and concentrating the pigment in their feet to render a dazzling aquamarine.

Unsurprisingly, blue-footed booby eyes are keenly sensitive to the blue-green part of the light spectrum; for good reason. The hue of the foot reveals health and hardiness.

Many boobies change mates from season to season but there are great benefits to fidelity. Boobies in lasting relationships raise 35% more offspring than newlywed couples. The key to a successful long-term partnership is equitable sharing of nest duties. While biparental care is the rule of booby chick rearing, longtime mates have perfected the art of taking turns. They spend equivalent time and effort brooding and feeding their young.

Another mating pattern works nearly as well for boobies as high fidelity: a couple where one partner is young and the other much older (the so-called May–December effect). It does not matter whether the mother is younger than the father or vice versa. The progeny of age-mismatched parents are more likely to become parents than are offspring of pairs whose ages are similar.

In some booby species, this difference is often fatal. The only hope for a junior booby is the death of the 1st-born.

Among blue-foots, sibling violence is provisional. As long as parents are ample providers, a senior chick tolerates the younger hatchling. Woe to the 2nd-born if the 1st is not well fed.

Youth is still tortuous for the younger. An elder fledgling takes all the food that it can, and chronically pecks to demand submissive behavior, like facing away with its bill tucked down. If a 2nd-born makes it through its first months, its prospects are just as good as its sibling.

No matter how badly treated as a chick, upon maturity, a once-persecuted booby is surprisingly unflappable. 2nd hatchlings are just as capable of attracting partners, repelling rivals, and raising families as their domineering elder peers. Fearless indeed.

Many avian females solicit copulations from alluring males. They are often trading up.

Females are likely to have twice as many grandchildren if they mate with an extra-pair male than if they remain truly monogamous. ~ English ornithologist Nicole Gerlach

Blue tits are territorial. A female may find the best males taken and so must settle for less in a nest mate. Extra-pair mating may get her quality offspring and a supportive caretaker.

2nd-rate males are more often abandoned by their own female when she is fertile, receive fewer visits by neighboring females, have fewer offspring, and themselves survive less well. Whereas females fare well by divorcing their mates, males rarely ever wind up doing better.

By contrast, females in lekking species rarely copulate with more than 1 male. These females have free choice of a mate, regardless of what other females are doing.

With many birds, availability breeds lust. Avian extra-pair matings shoot up with population density. But not for burrowing owls. In the wild, burrowing owl nests are typically 15 km apart. Human urbanization brings nearby nesting opportunities. Nests may be as close as 10 meters.

Despite close proximity, burrowing owls remain monogamous. Other factors besides opportunity determine their mating practices. The need for parental care from both parents is a strong inhibitor of cheating.

Like burrowing owls, barn owls are monogamous. But 25% of barn owls eventually divorce, when breeding does not prove successful. The marital goal of a barn owl remains to find a compatible mate and stay together.

Swans are the largest of the waterfowl family, and among the biggest flying bird. The largest swan species – including mute, trumpeter, and whooper – can reach 1.5 m in length, with 3-meter wingspan, and 15 kg girth. Males are generally larger and heftier than females.

The fidelity of swans is legendary. They are monogamously mated year-round for much of their 20-year life. The longer a swan pair are together, the better they get at raising chicks. Unlike geese and ducks, swan males help build the nest, which is fiercely guarded by both.

Albatrosses are as faithful as swans. Giant petrels are mobsters in their social habits but have marriages of model monogamy.

There can be marked mating contrast between similar birds. Gannets have long-term relationships whereas somewhat similar frigatebirds change partners each bout of breeding.

Gannets colonially nest in crowded conditions on rocky seaside cliffs. The timing of breeding is critical to chick survival. A good nesting space is hard to find, so partners return to the same spot year after year. Monogamy suits their situation, to the point of having developed elaborate bonding rituals.

Frigatebirds too have elaborate rituals, though for mating courtship, not partner bonding. That’s the closest similarity between gannets and frigatebirds in the pairing department.

Frigatebirds nest on tropical islands. There are no clear seasons. Food supply is uncertain. Parenting is arduous. It takes more than a year to rear a chick.

So frigatebirds find a mate when conditions are favorable and get on with the business of breeding the next generation. There are no loving displays at a frigatebird nest: they generally ignore each other.

Besides birds, several monkey species are monogamous. In long-lived animals, a male is prone to abandon a female if the paternity of a brood is in question. Where paternal care is important, this reinforces monogamy.