Many vertebrate animals are good parents, and the responsibilities of parenthood take priority over all other aspects of their behavior. Parental care becomes the dominant force in their lives. ~ English zoologist Clive Roots

Parental duties are typically twofold: food and protection. The extent of post-natal care varies considerably by species, from days to a decade or more.

Animals have been taking care of their young for at least 450 million years. Ostracods (seed shrimp) are the earliest known example of brood care. Early in dinosaur descent, some diapsids provided post-natal parental care.

The general rule that parental care increases with complexity, size, lifespan, or whatever is so full of exceptions to not be a rule at all. Hooded seal pups are nursed for only 4 days on average, whereas parental cichlid fish care may last months.

Mortality is typically reduced by parental care, and affords the opportunity of learning from parents, including cultural transmission.

European earwig mothers lay a clutch of ~50 eggs in an underground nest during autumn, caring for them by cleaning the eggs to avert fungal growth. When the eggs hatch in the spring, good mothers guard and feed their offspring until they reach maturity: about a month.

Some European earwig moms are less fastidious in their maternal care: leaving their offspring to fend for themselves. Loss of maternal care influences neither developmental time nor survival rate for the 1st neglected generation. Indeed, orphaned earwigs may grow to be bigger adults.

There is a transgenerational cost: maternal care makes better moms in the next generation. Orphaned females tend to neglect caring for their eggs and their juveniles, feeding and guarding them less. Survival suffers.

Cichlids provide parental care for both eggs and larvae. Mouthbrooders incubate eggs in their mouth as soon as they are laid. Some, including the discus (pictured), feed their hatchlings by skin secretion from mucus glands.

Free-swimming cichlid young may be cared for weeks or months. Some species practice communal parental care: multiple monogamous pairs care for a mixed school of offspring. Fairy cichlids school and employ a collective nursery: fry are protected by older juveniles from previous spawns as well as by adults.

With a blazing red-orange body that brazenly warns would-be predators, Central American strawberry poison frogs outsource their toxicity production. They garner their alkaloid poison from the mites, ants, and other arthropods they eat, storing it in their skin glands.

A female lays her eggs in leaf litter, leaving them in papa’s care for a week or so. He keeps the eggs safe and pees on them to keep them moist.

Mother then returns and moves the eggs into a pool of water she forms in the foliage.

Parenting is often part of an animal’s life cycle; its form related to the mode of birthing, number and type of offspring, habitat, lifestyle, and sociality, among other things. There are confluences in these factors, forming a species survival strategy.

Animals either lay eggs or bear live young. The young may be precocial or altricial.

The number of eggs laid in a clutch varies from a very few to tens of thousands. The more eggs, the more likely that: 1) offspring are precocial, and 2) post-hatch parental care is limited, if there is any at all.

Large numbers of hatchlings make post-natal care impractical. Parental care in such case is pre-birth: placing eggs in a safe place and possibly watching over them until they hatch.

Some precocial species show parental care, particularly protection of hatchlings. Grebes and loons are precocial, but parents protectively carry their young on their back. The number of offspring per brood are small in both instances. Species of both birds are gregarious. Most grebes flock to migrate. Some loons, though territorial, have ritualized social gatherings.

Some beetle mothers take prodigious care of their little ones. Hatchlings are slow-moving, so leaf beetle moms, like many others, look out for predators and parasites. This is not the only maternal care that beetles engage in. Some leaf beetles prepare for bearing live offspring by readying leaf resources. Once born, mothers herd their hatchlings among leaves that maximize nourishment.

However birthed, having only a small number of offspring eases parental care. The degree to which post-natal care occurs and its duration often coincides with the sociality of the species. Most viviparous species are quite social.

Live birth is necessarily of a very few offspring at a time: 1 is common. Offspring are typically altricial. Little if any pre-natal care, and considerable post-natal parental care, are the norm.

However crucial to successful species propagation, parental care is but one part of life’s package deal. At the onset of breeding, mating style and parenting practice are related in many species.

Parental care is a major factor in social organization. While mothers are a default caretaker, dads get involved in relatively few species. In 90% of mammalian species, a male’s role in reproduction ends with fertilization. Contrastingly, many fish and birds, including colonials such as gulls, have fathers that extend prodigious care and feeding to their progeny. Paternal care occurs for a notable few mammals, including marmosets and gibbons.

For emperor penguins, a father fasts for months while holding an egg between its legs to keep it warm. In contrast, baboon fathers do not assist in offspring upbringing. Instead, they guard the entire troop, along with other adult males.

Humans are not very typical mammals, but they are quite typical birds. Birds have pair bonds, extra-pair copulations and divorce. They have all kinds of complicated social relationships, not so unlike humans. ~ Hanna Kokko

Biparental care is most common in birds. 90% of avian species are socially monogamous (but only 3% of mammals). Both bird parents share incubation and brooding duties.

For some birds, paternal interest is more or less enthusiastic, depending the partner. A male blue tit is a more diligent father when he considers his mate attractive.

Reproductive success requires a high degree of cooperation by each mate, as they switch duties. ~ American wildlife biologist John Piatt on murres 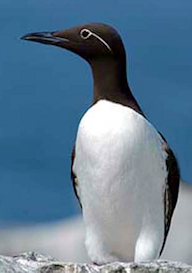 The common murre lives its life at sea, fishing in the frigid waters of the northern oceans. It spends time on land only to breed, in a high-density colony on rocky shoreline cliffs.

A common murre female lays a single egg per breeding season. Parenting is shared between mates.

Communication between mates allows murres to negotiate the level of effort that each member of the pair puts into the breeding effort. ~ John Piatt

Mom and dad take turns watching over the chick while the other goes fishing. When one parent returns with a meal, the couple preen each other and switch roles. This swapping ceremony typically transpires 3–4 times daily.

Role flipping does not always go smoothly. In some 20% of the switching ceremonies, one parent is slow to preen its mate, and then refuses to go fishing; forcing the one who just returned with a fish to go back out.

Tension also rises when the one with fishing duty comes back empty-beaked, which happens about 10% of the time. The failed fisher quickly starts to preen its mate; but the eager preening is only slowly reciprocated, or not at all.

The brooder is basically communicating: “The chick still needs a fish; you better go get one.” ~ Canadian psychologist and ethologist Carolyn Walsh

The swapping ceremony is a way for these seabirds to communicate their well-being, and to negotiate. Staying in the nest allows a worn-out murre to recover its strength. It may well need the respite.

There is a correlation between feeling well and swapping ceremony performance. While being a good mate sometimes requires forbearance, chronic shirking gets old.

Murres usually mate for life, but pairs sometimes divorce. Whether a couple is heading toward a split is a tale foretold in its role-swapping negotiations.

2% of bird species have a propensity to pilfer. Certain bird families are more prone than others. Birds of prey and seabirds tend to thievery, while songbirds much less so.

How birds make their living extends to their social graces (or lack thereof). Care in parenting may be altogether quite different.

Terns are prone to relieve larger species of their catches, and well as con one another. A female tern flirted with fish-toting males just long enough to sidle close and nab their food. Such antics are no reflection on parenting. A study found that tern thieves “were far and away the best parents.”

Many birds vocalize at their young. This often starts before hatching. A mallard mother-to-be mutters to her eggs. The tiny ducklings within respond when near hatching time, uttering sounds of their own. This part of the imprinting process, by which ducklings know to follow their mother.