Eusocial species have an entire colony as an extended family. Alloparenting is de rigueur.

Various gregarious species practice alloparenting: individuals other than biological parents act parentally. Females may forgo breeding to help others in the group rear younglings. The biologic for cooperative breeding is in raising the odds for successfully rearing offspring.

Some human tribes, such as the Efé of Ituri Forest in the Congo, practice alloparenting. Sustained intimate group cooperation is not typical of this social-but-selfish species.

Spiders are not known for their sociality, but of the 43,678 known species, at least 2 dozen are gregarious. Spider sociality independently evolved several times.

2 closely related cobweb spiders cohabit in a colony. They don’t hunt together. Instead, the colony is a colossal crèche. These spiders practice protective alloparenting. A female looks after any young within her purview.

Meerkats are outgoing mongooses that live in close-knit groups. Individuals know each other, both by looks and by their calls. 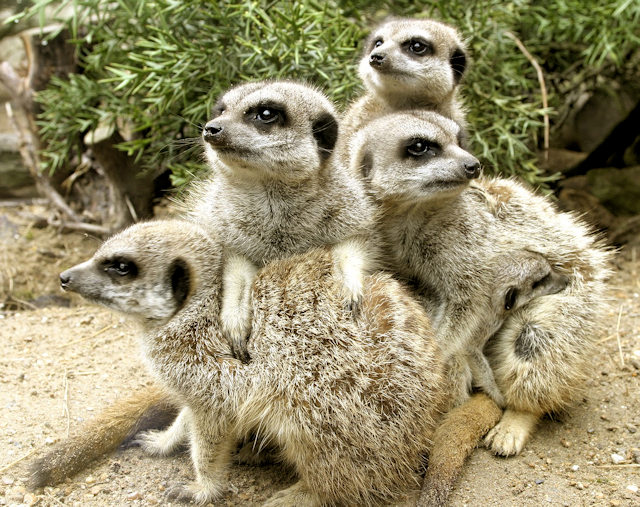 In a meerkat group, some will stand sentry while others forage. Further, all adult group members participate in protecting the young, not just parents.

Sentries are especially vigorous when pups are present. Sentinel behavior is geared to protecting the most vulnerable.

Despite the concern, dangerous duties go to a junior meerkat. A dominant meerkat lets a younger adult be the first to cross a road or other open area.

Just as human societies sacrifice their young in war, the realization of perceived imminent threats is inflicted upon those least valued by dominant members of a meerkat social group.

Alloparenting is not optional. For all their altruism and cooperation, meerkats are a hierarchical society.

An alpha pair reserves the right to mate. A dominant female will often kill any errant pups or force a subordinate mother to abort.

Some young female adult meerkats will wet-nurse a dominant mother’s offspring to stay within the community. Females can lactate by will, without ever having been pregnant. (Allolactation occurs in numerous mammal species.)

Meerkats don’t practice incest. If an alpha female dies and is succeeded by her daughter, her father will not mate with her. In this case, the colony reproduces via alpha group females stray-mating with roving males from other groups. Under this dynamic, pregnant females tend to kill and eat any pups of other non-alpha females.

Meerkat societies are the human equivalent of totalitarianism.

Uncoercively, Florida and Mexican scrub jays have cooperative parenting, where there are helpers at each nest, usually close relatives of the breeding pair.

Cooperative parenting may be inspired by resource shortage: insufficient food to afford more widespread breeding, at the risk of a group or population starving itself.

An acorn woodpecker couple with fledglings has several helpers that do not breed. They are generally young adults related to the family who have yet to mate. Helpers assist by foraging for food for the family.

Such assistance more beneficial in years of abundance than those of scarcity. In hard times, helpers may be consuming food that could otherwise go to the fledglings. During such times, alloparenting can be counterproductive to reproductive success.

Cooperative parenting is most common in tropical and subtropical bird species that are colonial, or monogamous pairs that occupy territory year-round. Helper tasks may vary by species: from nest-building, incubation, and feeding hatchlings to property protection and predation defense.

Ani is a tropical cuckoo whose members live communally, in groups of up to 4 pairs. Females lay their eggs in one large nest and take turns incubating. The glitch in the ani’s breeding system is sometimes having too many eggs to fit in the nest. If this happens, a female ani will roll existing eggs out of the nest before laying her own. The dominant female typically lays last. Hence her eggs are keepers.

Alloparenting is not always of obvious need. Emotional attachment keeps some youngsters at home longer than biology necessitates. Yearling beavers, physically mature, typically stay with their parents for a season, helping to care for younger siblings. So too coyotes, gibbons, and numerous other mammals.

Carnivores more typically face such a dilemma of exigent conditions when their natural inclination is to more freely breed. Wild cat groups in harsh circumstances will cooperatively breed and practice alloparenting to help ensure the group’s long-term prospects.

Primates often assist with child-rearing. Childless females babysit for short periods, grooming and playing with younglings. Such childcare is not altogether altruistic. Childcare by Japanese and rhesus macaques helps females form alliances with mothers of superior rank. Babysitting is beneficial to young females for their own training. Irrespective of motive attribution, doing well by doing good benefits all involved.