They are the most enthusiastic animals. They live the life domestic dogs wish they could live. ~ English zoologist Rosie Woodroffe

The African wild dog is a long-legged canid that lives on the savannas and sparse woodlands of Africa. Its Latin name – Lycaon pictus: “painted wolf” – refers to the animal’s patchwork coat of red, black, brown, white, and yellow fur. Each dog has its own unique coat pattern, allowing instant recognition by others in the pack. These dogs have large rounded ears. 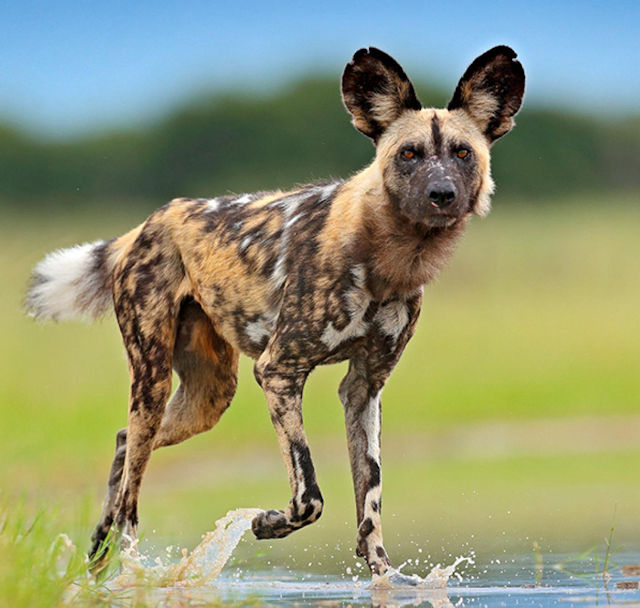 All other dogs have 5 toes on their feet. The African wild dog has only 4.

Wild dogs live in family groups of 6–20 adults. The dogs hunt as a pack in a very disciplined way: stalking with military grace and precision – steps synchronized, radio-dish ears cocked forward. Their attacks are similarly choreographed to cover all angles and ensure capture. If they tire in a long chase, initial leaders are replaced by 2nd-string dogs that lag early on. African wild dogs can run long distances, at speeds up to 55 kilometers per hour.

Wild dogs’ relentless pursuit of prey is contrasted to their affability, civility, and generousness among themselves. Before a hunt, pack members practice a ritual bonding: circulating among the group, vocalizing, and affectionately touching each other, building enthusiasm.

Among most group-living carnivores, such as the big cats, dominant adults get first serving, leaving leftovers to their juniors. Wild dogs are exactly the opposite. Adults let puppies feed first. Pups still in the den, or injured pack members, are provisioned by regurgitation of the most recent meal.

The pack is typically dominated by a monogamous breeding pair. Other adults, which are related, serve as guardians and babysitters, and even wet-nurse the alpha pair’s pups.

Wild dogs are generous to a fault. Large packs with many offspring end up shortening the lives of nonbreeding adults, who gradually become malnourished from feeding the young.