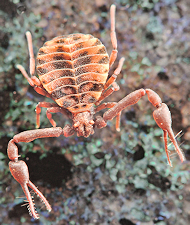 Pseudoscorpions are arachnids that look like scorpions in having flat, pear-shaped bodies and front pincers. Alas for them, they lack the scorpion’s stinging tail. There are over 3,300 species of pseudoscorpion in more than 430 genera. Pseudoscorpions emerged ~380 million years ago, during the Devonian.

After hatching, pseudoscorpions reach maturity in 10–24 months after molting a few times. Depending upon species, adults grow to 2–12 millimeters long, and may live 2–4 years.

Paratemnoides nidificator colonies are found under the bark of trees in the vast Brazilian Cerrado (tropical savanna). P. nidificator hunts in packs to bring down larger prey. They then share the spoils equitably, with hunters eating first, then younglings, and finally others in the colony.

These pseudoscorpions take different work roles based upon their age and personality. Males and young females tend to hunt, while others spend time on home maintenance and caring for the young.

Division of labor is a strategy that maximizes foraging and reproductive success. ~ Everton Tizo-Pedroso & Kleber Del-Claro

Females will let their offspring eat them if food runs short. P. nidificator plan their breeding to avoid that.

P. nidificator live in tight-knit social communities. They are never aggressive toward one another.

Cormorants fish in different formations by group size. They vary their fishing tactics depending upon water turbidity and fish distribution.

Pelicans will form a tightly coordinated aerial crescent and dive for fish, closing the formation into a circle once in the water. This optimizes the odds of everyone getting something to eat.

Hawks and eagles sometimes cooperatively hunt. Harris’s hawk hunts in groups of 2 to 6, allowing them to snag jackrabbit, which, at over twice the size of single hawk, would be too much for a solitary hunter to take down. Coordinated hawk tactics vary depending upon the situation.

Crocodiles and alligators cooperatively collaborate during their hunts. Some swim in a circle around a shoal of fish, making the circle tighter until the fish are forced into a tightly woven bait ball. Then the crocodiles take turns cutting across the center of the circle, snatching prey.

These reptiles sometimes use their different sizes to advantage. Larger alligators drive fish out of deep lake waters into the shallows, where smaller, more agile ones are waiting.

The South American giant otter may grow to 1.7 meters and 32 kilograms. These otters eat mostly fish, principally caught solo; but they hunt cooperatively when pursuing large prey, including caiman and anaconda.

With obvious coordination, a caiman is attacked simultaneously from different directions. 2 or more otters will bite a large anaconda at different points, holding the snake fast, then bashing the body against fallen tree trunks floating in the water.

Dusky dolphins herd anchovies in the ocean using both coordinated chase and noise tactics;: a cooperative venture that creates a tight ball of anchovies, whereupon the dolphins take turns diving into the ball to grab bites while the others keep the anchovies balled.

Lionesses in a pride commonly cooperatively hunt, and when doing so enjoy greater success than solitary hunting, as a group can bring down bigger game. Their typical tactics, such as spacing, appear more opportunistically aware than intentionally coordinated: individuals taking advantage of a group endeavor. 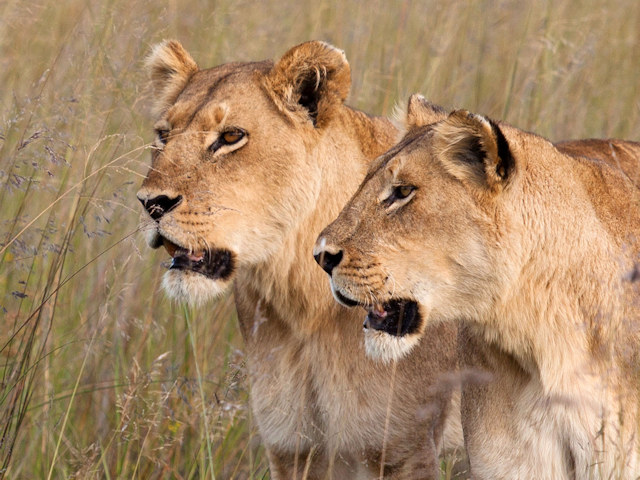 Lionesses are quite capable of being thoughtful team plays. In one instance, 4 lionesses approached a herd of wildebeest with a businesslike gait. The wildebeest had split into 2 groups: one with about 50 to 60, the other group 100 or so. The hunting party kept enough distance not to startle the wildebeest. The ground was uneven, and the hunters diverged without the wildebeest being able to see the split.

As diversionary showpieces, 2 lionesses slowly climbed atop 2 adjacent mounds, where they sat upright, stationary but conspicuous. The wildebeest kept a wary eye on those 2. A 3rd lioness slinked her way into a ditch between the 2 groups.

A 4th lioness bolted from the forest behind the smaller group, driving those wildebeest toward the larger group and the showpiece lionesses, and over the ditch where 1 lioness lay in wait. As the wildebeest bounded over the ditch, the lioness there leapt up and grabbed 1, killing it. The 2 diversionary lionesses then joined the feast of 4, while the reunited wildebeest looked on in a line from the open plain.

In hunting gazelle, groups of lionesses form a U-shaped pattern, surrounding their prey on 3 sides, whereupon they close in.

Lionesses in a pride – often sisters or mother and daughters – hunt together for many moons. They know each other intimately. In group hunting, individual lionesses take consistent positions in strategic formations.

It was long thought that male lions were dependent upon lionesses for largesse. Instead, males are adept ambush hunters, relying upon the cover of darkness or vegetation. Male lions do not cooperatively hunt.

Baboons are somewhat like lions in their hunting habits: one starts hunting and others join in. Whether a female that makes a catch can eat much of it depends on the aggressiveness of the dominant males in the group. Often female baboons are robbed of their prey. Baboons are not inclined to share.

Besides baboons, many monkeys cooperate with each other and generally possess a strong sense of fairness.

Comparatively, chimps play favorites: they cooperate in corralling game and share the spoils more easily if there are good relations between the parties. Chimps practice reciprocity with cooperative endeavor and share food.