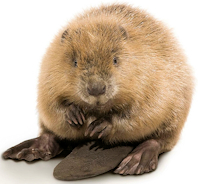 Beavers are semiaquatic rodents which live in a riparian zone: the interface area between land and a river or stream. Healthy riparian zones are ecologically significant in promoting habitat diversity and soil conservation.

An adult beaver may weigh 25 kilograms or more. The South American capybara is the only larger rodent.

Beavers continue to grow throughout their lives, which may be up to 24 years. Unusual for mammals, which are usually sexually dimorphic, female beavers may be as big, or even bigger, than males of the same age.

Beavers have poor eyesight but keen senses of smell, touch, and hearing. As beavers work at night, bad eyes are no problem.

Beavers are best known for their building proclivities. Beaver colonies build dams on a stream or river to yield a still, deep-water pond that protects against predators and affords floating supplies to facilitate building a lodge in a strategic location.

Beavers also build canals to float hard-to-haul building materials: deepening shallow areas to form channels, so that branches may be floated without dragging on the bottom. Mud is excavated from the bottom and piled up, sometimes forming small islands. Canals are by no means helter-skelter: they run along efficient travel routes.

Dams are built by placing spaced vertical poles which are filled between with horizontally stacked branches. To seal water flow, any gaps between the branches are covered by weeds, mud, and sometimes stones.

Beaver construction techniques are specific. They will precisely whittle sticks to block a drain.

The beaver is a keystone species in its ecosystem: creating wetlands that allow other species to thrive. The standing deadwood that beavers leave behind is beneficial to various plants and animals.

The works of beavers keep the areas where they live ecologically healthy. Only humans shape landscape to a greater extent than the beaver, though to opposite effect. Whereas beavers enhance Nature, men only destroy it.

Beaver dams and lodges are built from the same materials. Lodges lack apparent order or regularity in structure, but a beaver lodge is a comfy home for its inhabitants, with underwater entrances that make it nearly impossible for other animals to enter except muskrats, who sometimes live inside beaver lodges with the resident beavers.

Lodge entrances and the living area are dug out as a final step in lodge construction. A beaver lodge has 2 dens: an entrance den (the mud room), used for cleaning and drying off after getting out of the water, and a family abode. Only a small portion of a lodge is used for a living area.

In late autumn, beavers cover their lodges with mud, which freezes when cold weather arrives. The mud becomes almost as hard at stone, impenetrable to predators. Come spring, beavers leave their embankments, roving around until autumn arrives, where they return to their lodge and begin to lay in a wood stock.

Never one to rush, beavers procrastinate on repairs until the frost sets in, and never set the mud top on until the weather becomes biting cold. In constructing a new lodge, trees are felled in early summer, but building seldom begins before the end of August.

Beavers are thoughtful planners. Adults are adept problem solvers. Their techniques prove the point: from their choice of lodge location (never near shores that won’t accommodate a lodge) to tool use (shaping materials with their teeth to fit perfectly).

Lodge and burrow construction are clear goal-oriented activities, as is reasonable efficiency in bringing the right building materials on site. Beavers vary their dam and lodge building techniques to fit local conditions and available materials.

Beavers are not geniuses with flat tails and a fine coat. Their efficiency in felling trees is at times less than ideal. Beavers sometimes goof: proceeding by trial and error, as if they were merely human in mental ability.

Beavers mate for life, though extra-pair copulations do occur. A widowed beaver will mate again. Both male and female participate in home life: constructing and repairing facilities, rearing offspring.

The 1st month of a kit’s life is spent in the lodge, taken care of by mother, while father maintains the territory. Young beavers spend much of their time playing. They also watch and learn from their parents. Yearlings try to help, though they are often inept.

Beavers may leave home after more than 2 years, but will stay if food resources are short, if there is a drought, or if population density is high. Beavers usually do not settle far from their natal territories.

While kin are tolerated, intruders are dealt with harshly, often violently. So much is invested in developing a territory that defending it is an utmost priority. Beavers get to know their neighbors by scent and are tolerant of them.

A wide variety of animals display considerable ingenuity and versatility in the construction of shelters and structures that serve other purposes, such as capturing prey or attracting mates. These activities require adjustment of behavior to the local situation, to the materials available, and to the changing circumstances at various stages of construction. This necessary versatility often suggests that the animal is thinking about the results of its efforts and anticipating what it can accomplish; acting to attain an intended objective is a more efficient process than blindly following a rigid program. ~ Donald Griffin