By tuning in to our feelings, dogs create an emotional channel between our minds and theirs. ~ American novelist and dog trainer Lee Charles Kelley 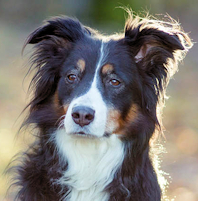 Dogs and humans share a similar social environment. They similarly process social information. That might help explain why humans and dogs communicate with each other so readily. ~ Hungarian zoologist Attila Andics

Dogs classify photos of animals the same way people do, which means their cognitive categorization is selfsame.

Like babies, dogs selectively imitate an action based upon how well the imitation works in getting to the desired goal. This suggests cognitive processing like human infants.

Dogs and humans are distantly related. The last common ancestor dates to at least 100 million years ago, and is shared with shrews, hedgehogs, rodents, bats, rabbits, ungulates, and marine mammals, as well as all primates.

When forbidden to take food, dogs are 4 times more likely to disobey in a dark room than a lit one. Which is to say that dogs are inclined to pilfer food when they think nobody can see them. This indicates that dogs can comprehend their owner’s perceptual perspective.

Dogs show a variety of easily identifiable emotional responses. Their faces are emotively expressive and capable of showing mixed emotions. Dogs bond with each other by mimicking emotive facial expressions.

Dogs are exquisite readers of body language. While playing with another dog, a dog can read their motivation and the emotional state of the other dog. Dogs’ rapid mimicry is an involuntary, automatic, and split-second mirroring of other dogs. This phenomenon is present also in humans and in other primates. ~ Elisabetta Palagi

Dogs at a park solicit each other to play together. If the prospective playmate is within sight, a dog gives a visual signal: opening its mouth wide and bowing down. If instead the dog is turned away, or otherwise distracted, the interested dog will give its friend a little nip, to get attention.

Dogs have a sense of fairness and feel envy. Being left alone brings anxiety and may lead to depression.

Dogs demonstrate empathy in a variety of ways. Dogs look guilty when scolded by their owner, even if not guilty of doing anything wrong (that is, the owner wrongly accuses the dog). This is an empathic expression, in understanding the emotional context that the owner has.

Dogs are attentive to the cognitive state of others. So are wolves, who are better at picking up on social cues, even those from humans.

While dogs more readily bond with other species, notably humans, wolves cooperate better with their own kind. Wolves readily imitate other wolves, but dogs do not pay close attention to conspecifics, and so do not learn well from other dogs.

Unlike the natural cooperation of wolves, dogs have strict dominance hierarchies, demanding obedience from subordinates. As wolves became dogs, they were bred for their ability to follow orders and submission to human masters.

The difference in interspecies’ attachment between dogs and wolves owes to their early development. Both dog and wolf pups develop the sense of smell at 2 weeks of age, hearing at 4 weeks, and sight at 6 weeks. But the onset of their worldly exploration differs. Whereas wolves begin at 2 weeks, dogs only start at 4 weeks.

This means that wolves are still deaf and blind when they start exploring. At that tender age, they rely primarily upon their sense of smell.

When a wolf pup starts to hear, new sounds are initially frightening. So too new sights. Those early fears settle into a sense of wariness that a wolf never shakes. Contrastingly, dogs don’t start exploring until they have all their senses working, so they are not wary like wolf pups. Hence dogs more easily form a sense of attachment and feel emotional bonds without the unconscious caution that nags in wolves’ minds.

With a wolf pup, you won’t get the same attachment, or lack of fear. ~ American zoologist Kathryn Lord