Warmth is spread through the troposphere by atmospheric circulation. While chaotic turbulence plays a large role locally, wind belts girdle the Earth and create global patterns. 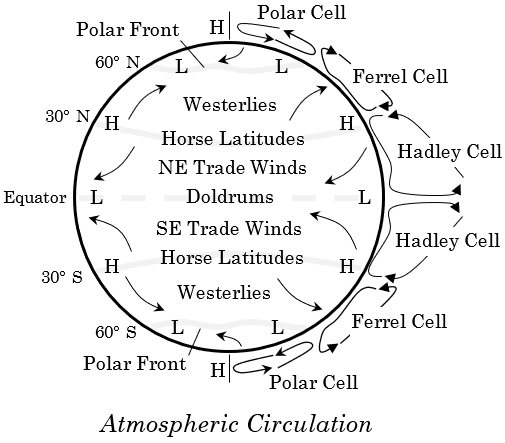 The uneven heat distribution of solar radiation and Earth’s rotation cause differences in air pressure. Aiming at equalization, wind flows from high- to low-pressure areas.

The Earth’s wind belts are organized into 3 different cell types, based upon latitude. These cells are characterized by the bands of pressure which drive them.

The equator is a low-pressure area. Prevailing winds are calm: the doldrums.

Low- and high-pressure areas on the surface are balanced by their opposite relative pressures in the upper troposphere; hence a circulating cell is defined.

Elevated temperatures at the equator cause surface air to expand and become lighter. This warm, moist air at the equator is lifted aloft, and carried poleward 10–15 km above the surface. The warm air is replaced by cooler, heavier air, flowing in from the north and south.

At the high-pressure Horse Latitudes, between 30°–35° north and south, the air descends. Some of the descending air travels along the surface, closing the Hadley cell loop and creating the trade winds.

Owing to chronic high pressure, land in the Horse Latitudes receives little precipitation. Winds there are variable, mixed with calm.

Over the oceans, the Westerlies have the strongest winds, especially between 40°–50° latitude, and particularly in the southern hemisphere, where there is less land in the middle latitudes. The Westerlies blow from west to east.

The Polar cell is the belt between latitude 60° and the pole. Like the Hadley cell, air masses at the 60th parallel are still warm and moist enough to undergo convection, and thereby drive a thermal loop. By the time relatively warm air masses reach the polar region they have cooled considerably, and so descend as a dry high-pressure area. This wind moves away from the pole near the surface, but twists westward because of the Coriolis effect, producing the polar easterlies.

While the Hadley and Polar cells are closed-loop systems, the Ferrel cell is not. The Westerlies are created from eddy circulations between high- and low-pressure regions in the middle latitudes.

The strongest jet streams are the polar jets, 7–12 km above sea level. At 10–16 km, subtropical jets are higher and somewhat weaker. Both the northern and southern hemispheres each have a polar jet and a subtropical jet.