Water vapor and ice crystals coalesce in the atmosphere, forming clouds as warm, moist air rises. As atmospheric pressure lowers at higher altitude, an air mass expands as it ascends. During expansion, air cools adiabatically until its temperature falls below dew point. As the air becomes supersaturated, water vapor condenses into microscopic droplets, which are the nuclei of cloud condensation. The now cool, wet air mass forms a cloud.

Cloud cover is especially dominant over the oceans, where less than 10% of the sky is without clouds at any one time. 30% of land surface is cloud-free on average. Overall, 2/3rds of Earth’s surface has cloud cover at any time. 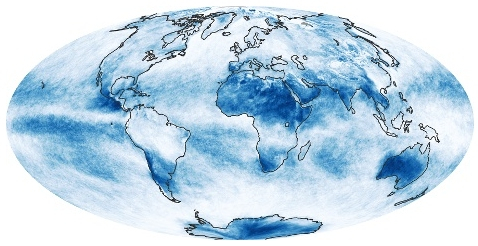 Regardless of rain or snow, clouds themselves have an overall cooling effect that greatly affects global climate. Clouds cool by reflecting incoming solar radiation, and warm by trapping outgoing heat.

The band of clouds that cover the equator is caused by the Hadley cell which dominates the tropics. Winds converge near the equator and rise to 10–15 km before moving toward the poles.

As this warm, moist, tropical air rises and cools it loses its capacity to hold water vapor; condensing into clouds which produce regular thunderstorms. The cold, dry air sinks back to the surface at about 30° latitude.

Clouds also commonly form in the middle latitudes – 60° north and south of the equator – where polar and mid-latitude Ferrel circulation cells collide. This pushes air upwards, fueling the formation of large-scale frontal systems that dominate the weather patterns there.

Ferrel cells are an atmospheric eddy, formed by the upward movement of polar air currents at 60° latitude and the downward flow of cool dry air from the Hadley cycle at 30° latitude.

Clouds are categorized by their appearance. The 8 main cloud families are divided into 3 groups, based upon altitude.

A cloud at the surface is called fog. Low clouds (up to 2 km) are stratocumulus, stratus, and nimbostratus. Mid-altitude clouds (2–7 km) are altocumulus and altostratus. High clouds (5–13 km) are cirrus, cirrocumulus, and cirrostratus. A cloud that extends through all 3 heights is a cumulonimbus.

Cirrus clouds are the thin wisps of vapor that streak the sky at high altitudes; covering nearly 1/3rd of the globe at any time. Mineral dust forms the seeds of cirrus clouds. This dust naturally originates from dry surface regions, but human activities have increasingly contributed.

High-altitude clouds that curl at the top like breaking waves indicate disturbance in Earth’s magnetic field. The waves are caused by high-speed winds blowing over more stagnant air masses, forming a distinction pattern known as Kelvin-Helmholtz instability waves. These ultra-low frequency waves occur 20% of the time. They change the energy dynamics in the magnetosphere, affecting the blockage of incoming cosmic radiation.