The atmosphere is a continuous mass resting on the earth and the sea, and they react upon each other. ~ Swedish meteorologist Hugo Hildebrandsson

All the planets in the solar system have atmospheres. Venus is covered by a dense, stifling blanket of carbon dioxide, with an atmospheric pressure 90 times that of Earth. Mars too has an atmosphere of CO2, but it is a thin coat: only 1% the pressure on this planet.

The gaseous onion of Earth’s biosphere is the least weighty: one billion megatons. The ocean weighs 1,000 times as much; the physical earth a million times more.

Like all other aspects of the planet over its 4.55 billion-year existence, Earth’s atmosphere has evolved. Its present composition is 78% nitrogen, 21% oxygen, 0.93% argon, and trace gases, most notably carbon dioxide (0.04%).

Earth’s atmosphere is especial in the solar system, for the relative abundance of oxygen and scarcity of carbon dioxide. This owes to photosynthetic life, particularly plants.

The atmosphere acts as an exchange medium for Earth’s elemental cycles, such as carbon and oxygen. A viable atmosphere, as much as clean water, is a requisite for life.

Given its orbital station about the Sun, Earth is naturally given to frigidity. Its atmosphere breathes the possibility of life in temperate climates. 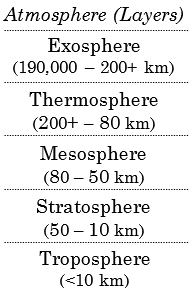 The atmosphere has 5 layers: the exosphere, thermosphere, mesosphere, stratosphere, and troposphere. While the exosphere is sparse, the other layers have varying layers of density which turbulently fluctuate via internal waves that propagate between high- and low-density layers. Internal waves are a natural fluid coherency that also appears in the ocean and other waters.

In the atmosphere, internal waves are the reason why weather forecasts go awry. These waves deposit and move energy. Through the butterfly effect, small internal waves can create significant, weather-changing dynamics.

When forecasters don’t account for them on a small scale, then the large-scale picture becomes a little bit off, and sometimes being just a bit off is enough to be completely wrong about the weather. ~ American mechanical engineer Julie Crockett