The development of plate tectonics and the differentiation of the lithosphere into oceanic and continental components that followed were key events in the evolution of the biosphere on Earth. ~ English geologists Chris Hawkesworth & Michael Brown

Earth’s crust rides on a patchwork of plates, in constant motion relative to each other, producing terrestrial effects: the lithosphere in motion. 20-some plates slide over the asthenosphere, propelled by volcanic heat. 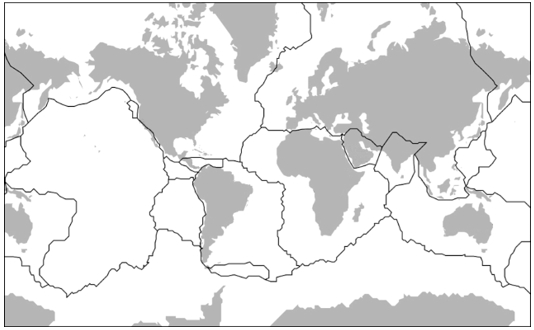 In plate tectonics, the process by which Earth’s surface is constantly being reorganized and rebuilt, surface plates (the lithosphere) move over the underlying part of the mantle that is actively transporting heat by convection (the asthenosphere). ~ American geologist Rob Evans

Plate tectonics is a relatively benign way for Earth to lose heat. You get what are catastrophic events in localized areas, in earthquakes and tsunamis. But the mechanism allows Earth to maintain a stabler and more benign environment overall. ~ Australian geologist Peter Cawood

The intercourse at boundaries between tectonic plates is of 3 varieties: divergent, transform-fault, and convergent.

At a divergent boundary, plates move apart. A piece of lithosphere is spawned as plate area increases.

At a transform boundary, 2 plates rub, in the same or opposite directions. Plate area is unchanged. The sideswiping commonly creates earthquakes.

Plates come together at a convergent boundary. One plate is subducted: recycled back into the mantle. Plate area decreases.

Converging plates, where one is oceanic and the other carries a continent, are marked with mountain ranges and ocean trenches. Their collision is celebrated with deep earthquakes and volcanoes. The Andes formed from such an event, when a subducting oceanic plate dragged South America westward, causing the continent to slam into the subduction zone.