Nobody has come up with a satisfying answer yet on how plate tectonics started. ~ American geochemist Kent Condie

Tectonic plates cannot subduct if the mantle is too hot, as plates break up from the heat when going down. The mantle of the early Earth was so hot that dynamic tectonic plate flow with subduction did not begin until ~3 BYA. 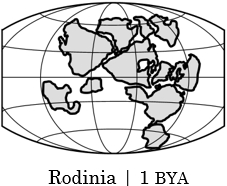 When Earth’s lithosphere was hotter, subduction did not drive continental drift like it did later. From 1.7–0.8 BYA, Earth’s crust was relatively stable, as the stasis of the supercontinent Rodinia 1.1–0.8 BYA illustrated.

Since then, the cooling mantle shifted the gyre of tectonics. The flow of subduction zones became increasing active. By 750 mya, with the breakup of the supercontinent Rodinia, the modern system of subduction has shaped the lithosphere.

Driven by the tunes of tectonic plates, continents dance a slow ballet: coming together to form larger landmasses or parting into pieces. This is continental drift. Shifting plates create an ongoing geological jigsaw.

Continental fragments, set adrift by the breakup of former supercontinents, can play a major role in the way new material is added to a growing continent. ~ Australian geophysicist Nicholas Rawlinson

The global mid-ocean ridge system is an interconnected network of volcanoes that produces the oceanic crust which covers 70% of Earth’s surface. In response to tectonic plate movements, lava forms at mid-ocean ridges.

Earth’s lithosphere is constantly reconfiguring and recycling itself, cooking new configurations by convection. A hot flow of magma rises to create an oceanic spreading ridge, thus forming new surface material. That pushes a plate; perhaps creating a zone of subduction, where one plate passes under another. The upper plate may deform to form mountains. 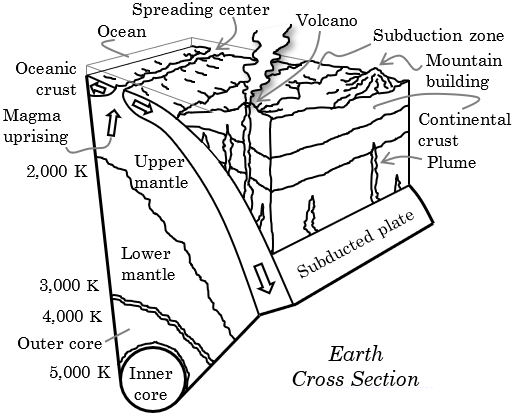 Subduction zones are delineated at ocean trenches, where plates sink into the mantle as cold slabs. These slabs can break off from their surface plates, altering the driving forces of tectonics.

Slab detachment occurs if thick continental crust, or an oceanic plateau, is swept by plate motion into the subduction zone, thus plugging it up. Detachment can be accelerated by mineral grains in a slab getting smaller during deformation, causing the slab to weaken while being stretched.

This combination of a weakening slab and crustal plugs incites abrupt slab detachment (within a few million years, which is a short span of geological time). The result can be precipitous tectonic plate shifts and rapid continental uplift.

Subduction is abetted by lubrication in the asthenosphere. Water-caused defects in subsurface olivine and heat lower the viscosity of the boundary layer beneath plates. Subduction moves vast volumes of water into the Earth.

A viscous layer of melted rock 10-km thick or more may underlie a tectonic plate.

Some oceanic slabs, such as the Tonga plate off Japan, subduct speedily. These slabs stay relatively cold to great depth, which limits the exchange of mineral elements, and so helps keep such slabs intact and sliding down.

Still, a slab is still cool compared to the mantle rock around it. The descent of a speedily submerging slab stagnates at around 650 kilometers down, as the slab becomes relatively buoyant compared to the ambient mantle.

The same temperature difference that afforded rapid descent above inhibits mineral transformation at depth, and so impedes penetration into the lower mantle.

Below 1,000 km, mantle viscosity abruptly increases. At 1,500 km there is a shallow lower mantle layer with impressive density and stiffness. Subducting slabs get stuck there.

Anything that would cause resistance to a slab could potentially cause it to buckle or break higher in the slab, causing a deep earthquake. ~ Lowell Miyagi

The oceanic lithosphere thickens via cooling as it ages and moves away from the mid-ocean ridge. The hot upsweep of the asthenosphere is converted into lithospheric mantle.

Recycled mantle and crust from subducted slabs eventually emerge as new seafloor via eruptions of volcanic vents along mid-ocean ridges. The magma in this new plate material is 1 of 2 types that come up. The other magma type, which emanates from island volcanoes like Hawaii, is disgorged from deeper hotspots.

Subducted plates create density differences in the mantle that affect gravitational pull in the crust. Slabs long buried have released water, reducing the density of the overlying rock. This result is lowered gravity, which can be accentuated if low-density rock is located above, near the surface.

Magma permeates portions of the mantle, shaping its structure and distributing materials that cool into different igneous rocks.

From below, the lithosphere is driven by magmatic convention currents. Upwelling plumes play a particularly powerful role in tectonics.

From deep within Earth’s mantle, large-scale upwelling occurs in 2 places: beneath Africa and the central Pacific Ocean. These major upwelling locations have been stable for at least 250 million years, despite dramatic reconfigurations of plates and continents on Earth’s surface.

Volcanoes have been instrumental in fashioning Earth’s crust. They reside where tectonics plates are converging or diverging, providing raw material for the dynamics of tectonics. Plumes from hot spots surge past the crust to the surface, creating active volcanoes that add new material to the crust. The Pacific Ring of Fire is a seismic belt of hot spots that runs from north of New Zealand up through Indonesia, Japan, and the Aleutian Islands, then down the west coast of the Americas, ending in Southern Chile.

The key to the origin of the continents and their continuing movements comes in relative density. Basalt sinks. Granite floats.

Magmas of basaltic and granitic composition separate into layers. Dense basalt sinks back into the mantle, leaving the granite floating like a cork, conserved on the surface.

A craton is the stable part of a continental plate, generally in the interior, built upon basement rock. Around a craton are elongated mountain belts – orogens – formed by later episodes of compressive deformation. The youngest mountain-building (orogenic) formations are along the active margins of continents, where plate movements deform relatively weak continental crust.

You need plate tectonics to sustain life. If there wasn’t a way of recycling material between mantle and crust, all these elements that are crucial to life, like carbon, nitrogen, phosphorus, and oxygen, would get tied up in rocks and stay there. ~ Scottish biogeochemist Aubrey Zerkle