Tectonics has reconfigured the continents on Earth over the past 3+ billion years, to profound effect on life in the ocean and on land. Convergence to supercontinents has been a recurring cycle: roughly every 450 million years. A supercontinent is a landmass comprising multiple continental cores.

The cycle from Rodinia to Pangea is illustrative. Rodinia formed 1.1 BYA by accretion via convergent collision of fragments from the previous supercontinent, Nuna (aka Columbia). Rodinia’s breakup was underway 750 MYA as plates diverged. 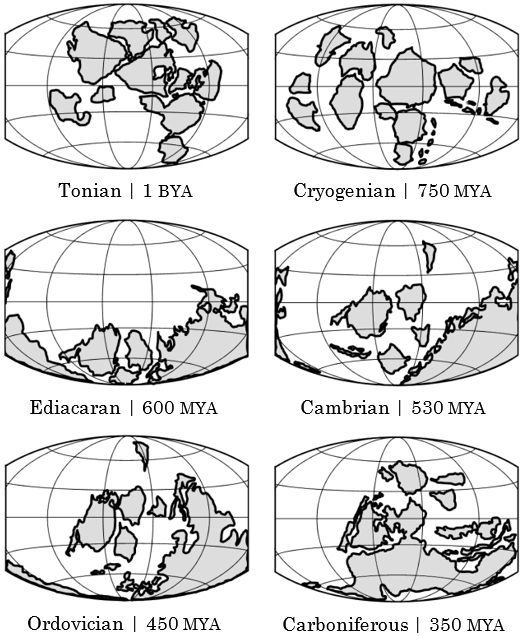 ~600 MYA, Rodinia’s landmasses reconfigured into a short-lived supercontinent: Pannotia. So much landmass was around the South pole that there were more glaciers in the run-up to and during the time of Pannotia than in any other period in Earth’s history: Snowball Earth. Pannotia lasted 60 million years before breaking into 4 major land masses.

The plates continued their convolutions during the Palaeozoic era, concluding in the formation of Pangea 300 MYA. Pangea stayed a supercontinent over 100 million years.

Then the cycle began again, as Pangea began breaking up. The Tethys Ocean shrank as its ocean crust subducted, while the Atlantic Ocean grew at a divergent boundary, splitting Africa from a nascent North America. 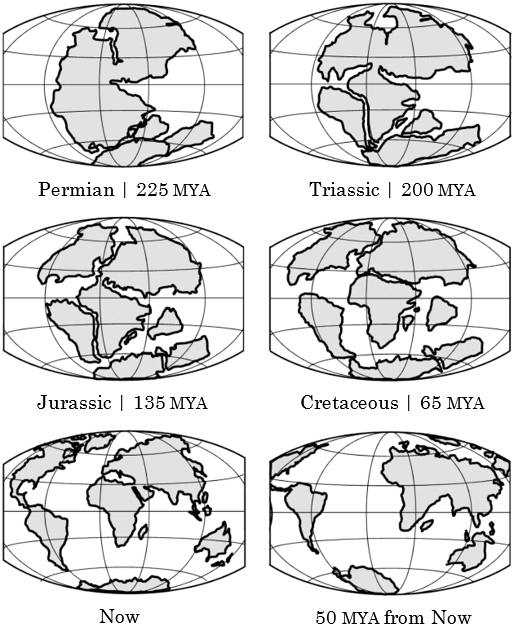 The supercontinent cycle follows a pattern. During breakup, rifting dominates; chasms appear as the lithosphere is pulled apart. This occurs at active margins which are at the leading edge of a continental plate, where subduction and uplifts occur. An active margin is a subduction zone or a strike-slip (aka transform) fault line, where plates rub against each other.

Rampant rifting leads to passive margins, with the ocean growing via seafloor spreading. A passive margin is the transition region between oceanic and continental crust, absent an active plate margin.

Tectonic percussion follows. Island arcs and continents bump and grind as a prelude to collisions between continents. Continents come together again.

The shape of the Earth’s surface – its geoid – is highly variable. Plume and plate tectonics distort the geoid into highs and lows of both height and heat.

The supercontinent cycle is spurred by continents rifting toward geoid lows: cooler, lower areas of Earth’s surface. As continents converge into geoid lows, subduction zones concentrate around the margins of the emerging supercontinent.

Cold slabs of ocean crust subduct. As these slabs accumulate in the upper mantle, they form a self-organized criticality: eventuating into a massive collapse (avalanche) into the lower mantle, toward the mantle-core boundary. This provokes powerful plumes (superplumes) from below.

Superplumes rise through the mantle, mushrooming out below the lithosphere, causing the upper mantle to dome, rift, and melt, creating a geoid high. Massive quantities of basalt are produced, accelerating rifting and plate divergence.

Thusly material is recycled through the mantle, and heat convected from the core toward the lithosphere. A supercontinent starts to rift as it becomes a geoid high. The cycle restarts.

Earth is not done with supercontinents. Computer models suggest that a new supercontinent, dubbed Amasia, will form 250 million years from now, in the northern part of the globe.