The trade winds across the tropical Pacific typically blow from east to west, keeping surface water in the central and eastern Pacific slightly cooler, while warm water accumulates on the western side, toward Indonesia. When these winds weaken, waves of warmer water slowly make their way eastward along the equator toward South America. This can initiate an El Niño or feed one that has already started. 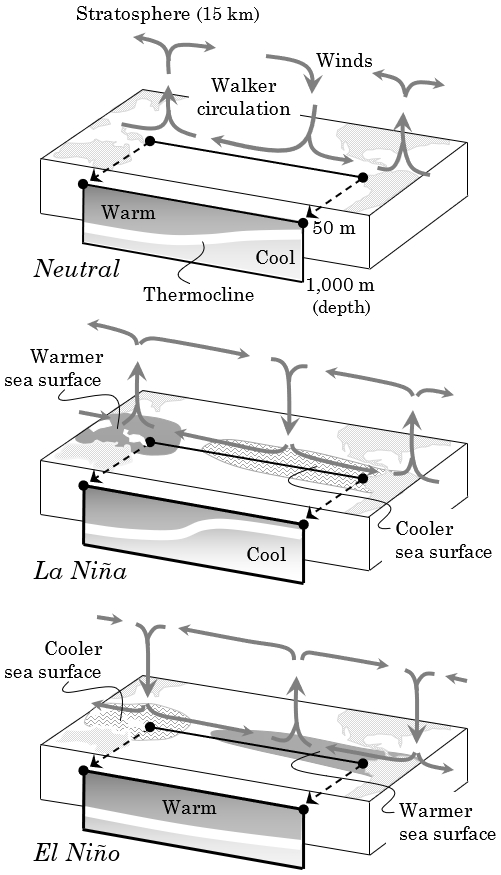 As the ocean is a tremendous reservoir of heat, water even a few degrees warmer can toast the air above it. During an El Niño, the waters in the warmer central-eastern Pacific take over as the engine driving the wind pattern known as the Walker circulation.

Historically, an El Niño has formed every 2 to 7 years, when Pacific winds shift massive pools of warm water, scarcely submerged, eastward. The warm water surfaces, releasing its heat into the atmosphere. This causes global shifts in storms, rainfall, and temperature.

Global warming has been weakening the Walker circulation and shifting it eastward for the past century. This is decreasing rainfall in the western Pacific, around Indonesia, and increasing it over the central Pacific Ocean.

Winds make all the difference in the intensity of an El Niño. Wind patterns around the world are driven by an intricate complex of factors.

In 2014, an especially intense El Niño seemed to be in the works, as warm Pacific Ocean sloshed eastward. But that July, serious winds pushed westward, thwarting the budding El Niño from building. Those same winds prevented stored ocean heat from being released.

In a sense, we dodged a bullet in 2014 by not having a monster El Niño. But that was short-lived, because the conditions that shut that developing El Niño down set up the big one in 2015. ~ American oceanographer Michael McPhaden

In March 2015, the lingering heat gave that year’s El Niño a jump-start into extremity. Abetted by the right winds, the 2015 El Niño that ended in May 2016 was full strength. The world’s coral reefs suffered terribly.

Global temperature peaks typically occur toward the end of an El Niño, but every event has its own quirks.

With warmer oceans, the world’s basic climate gyre is changing. It is likely strong El Niños will become more frequent, and that weather events unleashed by them will intensify.

La Niña is the opposite oscillation to El Niño: cold water in the eastern equatorial Pacific Ocean (by 3–5 ºC) and low air pressure. A La Niña often follows an El Niño, though not always.

The cycles of El Niño and La Niña have recurred for many thousands of years. The impact of global warming on these patterns is not known.