Plants play a vital role in the flow of energy through all ecological cycles. The whole system of life rests solidly on their industry, without which the evolution of many other organisms could not have occurred. ~ English biologists Martin Ingrouille & Bill Eddie

One way in which biota are categorized is by their consumptive role in an ecosystem: as giver or taker. Producers are primarily plants, along with marine algae. These are self-nourishing life: autotrophs requiring only what the Sun and inorganic elements provide.

Almost all other life are consumers: unable to fix for themselves the carbon needed to sustain their lives; so they consume other organisms. Consumers (heterotrophs) are generally recognized by primary feeding preference: herbivore, omnivore, or predator.

Preference is not always immediate necessity. Grizzly bears are considered carnivores, but can subsist on grass, at least for a while. A grizzly won’t last the winter if not fattened by eating much richer. 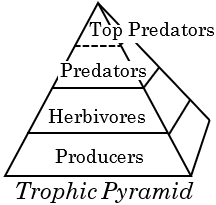 As consumers all eat other life, heterotrophs form food chains: hierarchies of consumption based upon who eats whom. Herbivores eat producers. Omnivores willingly eat producer or consumer.

At the top of the food chain are carnivorous predators, which eat other animals regardless of its prey’s food preference. Predators live off the flesh of others. Top predators are at the apex of the food chain.

Saprovores (aka detrivores), notably bacteria and fungi, delight in decaying organic matter, regardless of its origin as producer or consumer.

Saprovores are often first on the scene for a meal of carrion, but last in the trophic chain: the final consumer. Microbial saprovores are also known as decomposers.

The only things chewing into top predators are parasites and pathogenic microbes, in a process termed disease. By altering the interactions that occur between organisms at every level of the trophic pyramid, parasites and pathogens play an invisible but important role in food web dynamics.

The map of consumption among a biome’s biota is a food web, ranging in trophic flow from producer to consumer to decomposer. The food web is an intricate gyre. Diminishment of one biotic element in a food web can have rippling cascade effects, especially if the loss occurs lower on the food chain.

The turbulence of seawater affects how well marine bacteria are able to absorb nutrition. This stir can spill over onto the trophic abundance for animals that live further up the food chain.