You had no right to be born; for you make no use of life. Instead of living for, in, and with yourself, as a reasonable being ought, you seek only to fasten your feebleness on some other person’s strength. ~ English novelist Charlotte Brontë in Jane Eyre (1847)

Parasitism is a symbiotic relationship of an inveterate taker inflicting itself upon a host, which is typically a much larger life form than the parasite. Pathogens go a step further and cause disease.

Parasites may actively seek and invade their hosts or passively await entry. Most arthropods are proactive, whereas viruses, bacteria, and protists typically enter passively via some vector, such as water, food, or a hemophagic arthropod. Host-seeking is a complex endeavor, involving chemical, visual, and even auditory cues.

Ectoparasites live on the surface of a host. Mites and ticks are exemplary ectoparasites. Endoparasites, such as parasitic worms, live inside.

Most obligate parasites are parasitic as adults. Their larvae are not necessarily so.

A facultative parasite is opportunistically parasitic. Such parasitism in plants is called hemiparasitism.

Just as some viruses can themselves suffer viral infection, hyperparasites prey upon parasites. Hyperparasites are usually microbes, typically bacteria or viruses, though some protozoa, cestodes (tapeworms), and crustaceans parasitize other parasites.

Injuries by parasites occur in several ways. Parasites growing or moving through tissue damage by mechanical insult. Others, such as bloodsucking hookworms, feed on a host.

The harm caused by the parasite may in many cases vary with the host or with the time since infection. In some situations, parasites may even be beneficial. ~ American biologist Janice Moore

Parasites are pervasive. Their diversity matches that of self-standing life. More than half of all animal species are parasitic. The proportion of parasitic plants is much less, as the power of photosynthesis takes the edge off the urge to sap another’s life.

The frog lung fluke illustrates how parasites may make their way through various hosts at different stages of their life cycle. This parasitic flatworm (trematode) lives in the lungs of frogs as an adult. The fluke’s eggs are swallowed by the frog and pass through its digestive system, where they are excreted with feces. 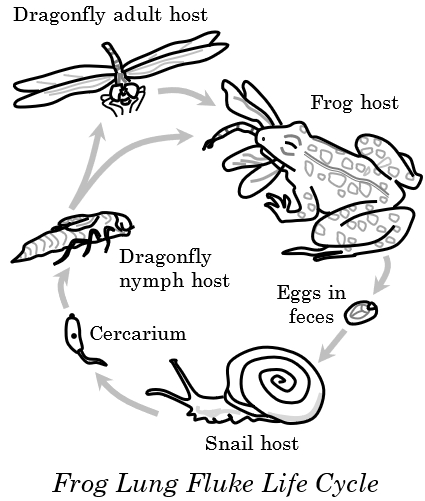 The cercaria leave the snail. They enter the gills of a dragonfly nymph and encyst in its tissues. Encysted trematode larvae are termed metacercariae.

Once an infected dragonfly nymph or adult is eaten by a frog, metacercariae become adults. The life cycle is complete.