The assortment of life on Earth is almost unimaginable: in size, shape, look, function, metabolism, and reproduction. Yet all life is locked into biochemical cycles of energy production that sustains trophic webs.

Sunlight is transformed by plant photosynthesis into usable energy, giving animals oxygen to breath, and the plants themselves become fodder for animals.

Organisms constantly interact with each other in a wide variety of ways. Meaningful relations most often involve food; sometimes shelter or other protection which amounts to not becoming food. 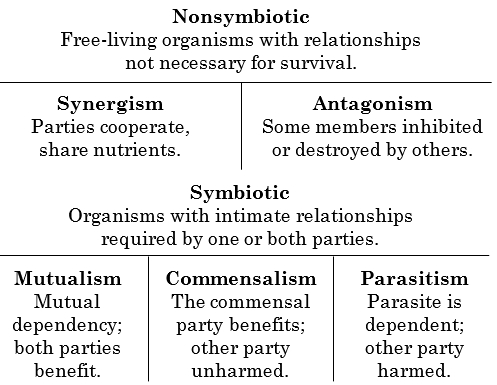 The ecological networks that emerge from these interactions strongly influence the population dynamics of species. In times of a relative environment equanimity, the gyres of these networks tend to stabilize into patterns of population activity.

Symbiosis is one of the fundamental mechanisms by which ecosystems become productive and robust. ~ Dutch evolutionary biologist Geerat Vermeij

Many plants get essential nutrients, notably nitrogen, by intimate association with bacteria and fungi. Fungi even provide health care to plants.

Sophisticated chemo-communication creates and maintains relationships. When first rooting, plants put out a chemical advertisement that bacteria and fungi respond to.