Jellyfish illustrate the difficulties of classification. These marine creatures evolved ~580 million years ago.

All jellies were once in 1 phylum called Coelenterata. This made sense, as phylum is a high-level grouping based upon body plan. Coelenterata all had a radially symmetrical body plan, with sensory tentacles, and a single opening to capture prey. They share a common evolutionary ancestor, and so are in the same clade.

With a simple tissue organization, these aquatic creatures rely upon water flow through the body cavity for respiration and digestion. Coelenterata had a decentralized nerve network rather than a unified brain.

But then Coelenterata were bifurcated into cnidarians (Cnidaria) and ctenophores (Ctenophora), based upon differences that largely had nothing to do with body plan.

Ctenophores lack the stinging cells (nematocytes) that cnidarians have. Cnidarians have only 2 layers of cells, while ctenophores have 3. Embryonic development is different between the 2. 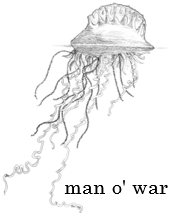 There is a modest body plan difference: ctenophores – such as sea anemones – have both bilateral and radial symmetry, while cnidarians may only be radially symmetrical. The Portuguese man o’ war is an exemplary marine cnidarian that lacks bilateral symmetry. But then, the man o’ war is not a single multicellular organism – it is instead a colonial creature, comprised of specialized zooids. (The inherent coordinated colonialism that comprises the man o’ war did not raise a classification issue, despite that being a defining characteristic. The discriminations which determine taxonomy involve a degree of arbitrary.)

Getting past the problem of Coelenterata, classification gets even trickier when considering a branch of cnidarians that degenerated into microscopic parasites. This group – Myxozoa – were originally considered protozoa: a diverse, catchall group of unicellular eukaryotes. Then genetic analysis revealed that myxozoans were in fact cnidarians that had shrunk and shed much of their genome, while retaining the most helpful genes, such as the ability to produce stingers.

The confirmation that myxozoans are cnidarians demands the re-classification of myxozoa into the phylum cnidaria. ~ Israeli molecular phylogeneticist Dorothée Huchon

Tucking myxozoa into the cnidarian phylum may make some molecular sense but would ignore the notion that phylum is based upon body plan, not genetic lineage: physicality at odds with cladism. The problem with taxonomy begins with the methodology for defining taxa.