Biology will relate every human gene to the genes of other animals and bacteria, to this great chain of being. ~ American molecular biologist Walter Gilbert

Biological classification is a facet of scientific taxonomy: naming everything according to some rule set. It fills biology books with hoary Latin words.

The living kingdom used to be divided into animals and plants. The division was based on the simple idea that all the interesting things moved and all the uninteresting ones did not. So, originally, both bacteria and fungi were classed as plants. Once it was realized that bacteria caused disease and plants did not, attitudes changed. ~ Anthony Trewavas

Coining the terms genus and species, 4th-century-BCE philosopher Aristotle classified animals by their method of reproduction. Aristotle’s system went the way of the dodo with additional knowledge and was long forgotten as others took up the classification cudgel.

17th-century English naturalist John Ray provided the first biological definition of species: as springing from the same seed, whether plant or animal. (Ray’s definition of species had no concept of evolution. But neither did his successor, Linnaeus. The exercise was merely cataloging.) By contrast, Aristotle’s definition was philosophical, in considering rationality and the hypothetical possession of a soul.

Ray also made a stab at biological classification. His work was overshadowed a half-century later by Swedish physician and biologist Carl Linnaeus (1707–1778).

If the names are unknown, knowledge of the things also perishes. ~ Carl Linnaeus

In laying the foundations for naming species (binomial nomenclature), Linnaeus is considered the father of taxonomy. (Linnaeus started the tradition of 2-part Latin names denoting genus and species. As his family spoke Latin at home, Linnaeus’ first language was Latin, learning (ostensibly native) Swedish later.) His 1735 book Systema Naturae held sway for centuries. (Linnaeus made no original advances. His classifying system and binomial nomenclature were anticipated by others. But Linnaeus created a well-esteemed presentation: clean-cut categories that made science alluring and accessible. His work inspired botanical gardens and a greater general interest in the wonders of Nature.)

Nature does not proceed by leaps and bounds. ~ Carl Linnaeus

By the time he died, Linnaeus was one of the most acclaimed scientists in Europe. Because of that, it took quite some time for his numerous mistakes to be cleared up.

Linnaeus labeled via physical characteristics. Based upon preconception, and in the spirit of animism, Linnaeus split the natural world into plants, animals, and stones. Abjuring the use of magnifying glasses, Linnaeus ensured that little life forms received little attention.

Linnaeus planted fungi in the plant realm. Fungi did not get their own kingdom until 1969. Confusion was doubled by the same fungus invariably getting at least 2 names based upon reproduction mode (asexual versus sexual). Meanwhile, with no protest, protists were thrown in as fungi.

Linnaeus’ 1753 book on plants described 6,000 species. It became the foundation of modern floral nomenclature, which has since ballooned to 1.05 million named species, of which only ~300,000 are unique – the others are redundant. The scientific moniker for the English oak has 314 synonyms, the common daisy 29, and the giant sequoia 18.

Serial revisions were inevitable. Darwin introduced the notion of evolutionary descent and clades: a common ancestor to later speciation.

No one definition has satisfied all naturalists; yet every naturalist knows vaguely what he means when he speaks of a species. ~ Charles Darwin

There has been a trend since the 1960s toward nomenclature based upon lineage (cladism), abetted by similarities at the genetic level. This evolutionary rationalization is still under development.

Evolutionary relations are better represented by new classifications than by the traditional 2 kingdoms. ~ American plant ecologist Robert Whittaker in 1969

Robert Whittaker’s 5-kingdom classification (plant, fungi, animal, protist, and prokaryote) ruled in biology classrooms for decades; but it was based largely on nutritional habits, not evolution.

The basis for systematics has changed; classical phenotypic criteria are being replace by molecular criteria. ~ American microbiologist and physicist Carl Woese et al in 1990

Early attempts to see what genetics could say about the tree of life proved deceptive. Results seemed realistic, but were contradicted when researchers looked at different genes, and, later, mitochondrial development. Recent technological advances have allowed genetic analyses (phylogenetics) that were previously unavailable.

Molecular phylogenetics has revolutionized our knowledge of the eukaryotic tree of life. ~ Canadian biologist Fabien Burki

In 1967, American evolutionary biologist Lynn Margulis proposed that eukaryotes arose from one prokaryote engulfing another: a bacterium absorbed by an archaean host became the eukaryotic mitochondrial organelle; a good guess later confirmed. In the meantime, Margulis’s insight was ignored or dismissed.

To get a handle on evolution, biologists looked at the mitochondrial genes of parasites, specifically those supposed from pre-mitochondrial times. That approach fell apart when researchers realized some of the presumed parasitic relics were relatively modern. The little nippers had simply tucked away their mitochondrial DNA in hard-to-recognize bits. This was a case where the microsporidia under examination had simplified themselves: dropping genetic baggage they did not need. By the time parasites were performing it, such genetic streamlining was a well-worn stunt. The masters of life – viruses – had long before mastered the same trick while other prokaryotes were busy sprouting new traits with then-novel gene sets.

Genetic analysis improved considerably in the 2010s. Using a computer to determine speciation based upon genetically distinct lineages produces 5 to 13 times as many species as conventionally tallied. Species have traditionally been defined by mating behaviors and physical traits, not genetic similarity. The tentative take by biologists is that computers can’t count when it comes to species. The controversies over taxonomy continue, driven foremost by species being an ill-defined term. 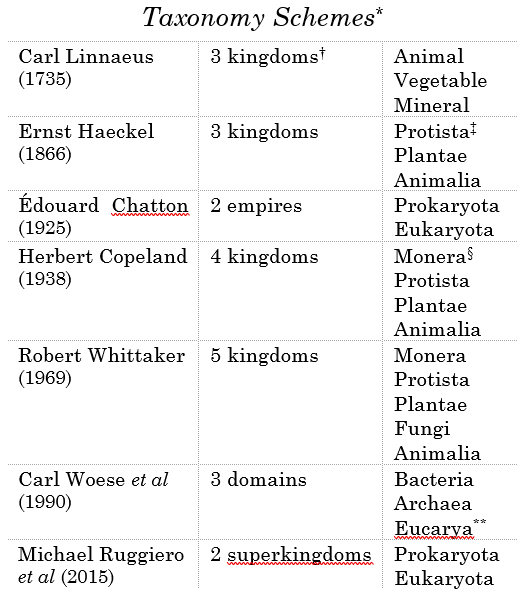 (* Viruses are universally and inexplicably overlooked.

† Linnaeus ignored microbes, which were known in his day. Robert Hooke first wrote of microscopic cells in 1665, followed by Antonie van Leeuwenhoek beginning in 1673.

§ Monera are prokaryotes, which was a proposed phylum (under Protista) by Haeckel in 1866; adopted as a kingdom by Copeland in 1938.

** Eucarya are eukaryotes (Eukarya), misspelled as an affectation.)

Species concepts – a set of rules or characteristics used to define a species – abound in the literature and have been a subject of long-standing debate among evolutionary biologists. ~ American biologist Margaret Ptacek & American zoologist Shala Hankison

Although there is continuity between an ancestor and its descendants, and although taxonomy must take into account evolutionary relationships, schemes for assembling descendants into groups often seem mostly a mental construct. ~ Canadian biologist Brian Hall & Icelandic biologist Benedikt Hallgrímsson

The complexities of phylogenetic history emphasize that classification is a practical human enterprise where compromises must be made. All classifications should be regarded as interim. ~ American taxonomist Michael Ruggiero et al