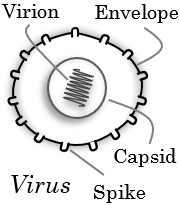 Viruses travel light. While hardy enough to survive the elements, they enjoy the comfort of being indoors.

Viruses evolved from ancient cells, losing inessentials to slim down to fighting trim and vivacious virulence.

Loss is nothing else but change and change is Nature’s delight. ~ Roman Emperor Marcus Aurelius

Each type of virus has its own distinctive size, shape, chemical composition, and host requirements.

Viruses are not even complete single cells. They come in a light coat but little underneath: no nucleus, no mitochondria, no ribosomes.

The vitals of a virus are its virion, comprising the virus’ genome packaged within larger molecules. Some viruses carry other equipment, notably enzymes, to accelerate production once a virus is activated.

A virion is encapsulated within a capsid: a protein protective coat put on when leaving lodgings in a host cell. Despite comprising few building blocks, capsids are intricately complex structures, sometimes with enormous conformational diversity.

Viral capsids are marvels of biological engineering. They are sturdy enough to withstand pressure exerted by the tightly packed genomes inside yet can come apart or loosen easily to release the viral genome once the virus penetrates the cell. They are also great examples of genetic economy. Because of the limited coding capacity of viruses, capsids are built by using a few proteins over and over. ~ microbiologist Ekaterina Heldwein

To make it easy on themselves, many viruses evolved capsids that self-assemble.

Capsids became more and more sophisticated with time, allowing viruses to become infectious to cells that had previously resisted them. This is the hallmark of parasitism. ~ Pakistani virologist Arshan Nasir

Some viruses, mostly those that infect animals, also sport an overcoat: a lipid envelope derived from the host cell membrane. It helps them travel incognito, evading a host immune system.

Some enveloped viruses have spikes (peplomers): a glycoprotein protrusion out of the envelope but connected to the capsid. These spikes are sensors, essential for host specificity and viral infectivity. A peplomer will only bind to certain receptors on a host cell.

A virus assembles itself within its host’s cell. Hence, all viruses are obligate intracellular parasites.

Viruses are everywhere. Viruses inflict themselves on all life, including their own kind. Every organism is constantly interacting with viruses.

Viruses exist wherever life is found. They are a major cause of mortality, a driver of global geochemical cycles, and a reservoir of the greatest genetic diversity on Earth. ~ American biochemist Curtis Suttle

Certain avian and pig viruses get by with just 2 genes. HIV, a relatively large, enveloped RNA virus, has only 9 genes; the herpes virus a few hundred. Then there is a vast diversity of viruses – dubbed pandoraviruses – that have over 2,500 genes.

It is clear that the paradigm that viruses have small genomes and are relatively simple in comparison to cellular life has been overturned. ~ Curtis Suttle

Viruses need only a genome large enough to invade host cells and redirect their activity to producing viral copies. Meanwhile, cells must carry on complex metabolic processes and maintain a communal existence.

Having minimal needs is why a virus may be only 20–300 nm in diameter, up to an order of magnitude smaller than a prokaryote. Small size facilitates infiltration. But it only works if one can rely upon one’s wiles.

The genetic stuffing of viruses has nothing to do with their ability to lead a furtive life. Viruses are an existence-proof that the intelligence of a mind does not have to be tied to a physical substrate.

Pandoraviruses are a family with some of the largest viruses, and the biggest genomes. They are very strange beasts, particularly in what they don’t pack into their genome. Pandoraviruses lack the gene for the capsid protein. They even lack genes for energy production and cannot produce a protein on their own. It rightfully makes one wonder what is so valuable in the genetic material they do carry.