A root is a complex assemblage. Besides sensing its environment, including humidity, light level, gravity, oxygen, and nutrients, a root cap protects the root as it navigates through the soil. Behind this is the meristem, a region of rapidly growing cells. A root consolidates and processes the information it has in the transition zone, deciding how to proceed. The transition zone houses the mind of a root. Cells in the elongation zone grow in length, letting a root extend and bend. 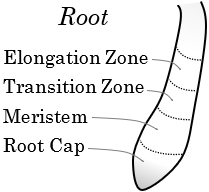 Each root tip has an independent intelligence, with a memory of its life experience. Ongoing electrical and chemical communication among root apices provide for a swarm intelligence network, affording collective decision-making that coordinates navigation and growth patterns, as well as waging territorial war against rival root systems.

Plants require 15 essential elements. All but a few are obtained as ions dissolved in soil water.

Many of these elemental nutrients are required in minute quantities. Even so, their absence limits growth. For example, peat soils are wholly organic. Their lack of mineral reserve is most telling in inducing copper deficiency.

For most soils, the 2 elements that most bound plant performance are nitrogen and phosphorus.

Almost all the nitrogen in soil is recycled. Its initial deposit is from dead organisms. To be usable by plants, nitrogen must be mineralized: turned from organic into inorganic form. This work is done by decomposers, whose performance depends upon soil conditions.

Whereas the nitrogen problem is one of availability, not scarcity, phosphorus presents an obverse challenge. Phosphorus is a rare element. If available, its uptake by roots is relatively uneventful.

Rocks contain less than 1% phosphorus, yet their weathering is the primary natural source of introducing phosphate into organically usable form.

Like nitrogen, most phosphorus is recycled in the substrate where life exists, whether in the water or on land. Phosphate (PO43–) is the biologically employed form of phosphorus. Whereas phosphate quickly moves through plants and animals, the phosphorus cycle moves very slowly in the ocean and soil.