What would be left of our tragedies if an insect were to present us his? ~ Romanian philosopher Emile Cioran

Insects comprise over half of all animal species. Before the onset of the mass extinction event caused by men, insect populations were prolific.

One in every two animals is an insect. ~ Australian entomologist David Yeates

There are 10 million different insects. Of that assemblage, only 2% are eusocial.

Insects have a hard exoskeleton made of chitin microfibers surrounded by protein matrices which vary by insect. Exoskeletons are layered, analogous to skin. The outer layers block foreign matter from entering, protect from abrasion, and reduce water loss. Skeletal muscles attach to the innermost layer.

Despite their small body size, insects have many more muscles than vertebrates, as the exoskeleton provides proportionately greater surface area for muscle attachment.

The strength of exoskeletons is impressive. The skinny neck of an ant can withstand 5,000 times the ant’s body weight.

Insect bodies have a tripartite segmentation: a head, thorax, and abdomen. The head houses compound eyes, 2 antennae, and mouthparts. The thorax bears wings, if wings are present. The abdomen holds the digestive system. 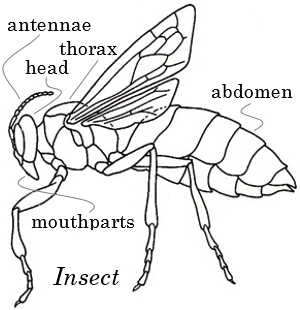 Reflecting their vast variety of diets, the mouthparts of insects vary enormously. Adaptively, this part of an insect is the most variable.

Antennae are an essential sensory organ. In flight, flies’ antennae keep them on course in the face of a breeze.

Tiger beetles scurry after prey so fast that they run blind. Antennae keep constant alert for obstacles. The beetles nonetheless must periodically stop for milliseconds to relocate prey.

Honeybees use their right antenna to distinguish between compadres and strangers. Their left antenna is more smell sensitive and plays a key role in communication.

In evolutionary time, insects are the earliest known eusocial creatures. Honeybees, weaver ants, leafcutter ants, and termites are exemplary eusocial insects. By contrast, Hymenopteran insects are presocial. Hymenoptera is the insect order which includes wasps, sawflies, and some early-evolved ants and bees.