Ant colonies are more than the sum of their parts. They are operational units with emergent traits that arise from complex interactions of colony members. The ultimate possibilities of superorganismic evolution are perhaps best expressed by the spectacular leafcutter ants. ~ Bert Hölldobler & Edward O. Wilson

Leafcutter ants belong to the attine group of leaf consumers, with 2 genera and 47 species. Attine ants are most abundant in the tropical forests of Central and South America.

Winged attine ants, male and female, fly from a nest en masse in a nuptial flight. They mate in the air, mostly at night.

Males are hatched from unfertilized eggs and contribute nothing except sperm. They are genetically programmed to expire shortly after their nuptial flight.

Each female mates with multiple males, storing the 300 million sperm needed to start a new colony. Leafcutter ants are among the most fertile animals known.

Once sufficiently impregnated, a queen loses her wings and scrounges for a suitable spot to nest. She digs a narrow tunnel, down 20–30 cm, then creates a single 6-centimeter chamber.

Before her mating flight, a queen packs a small wad of symbiotic fungus into her infrabuccal pocket, which is located at the bottom of her mouth. This mycelium is fed with her first eggs. If the initial fungus culture dies, the incipient colony is doomed.

A few emergent queens lose their wings before their nuptial flight. Unfertilized, their chance to establish a new colony is finished; so they change roles: staying with their mother colony to help in its defense.

Only about 2.5% of the queens have the good fortune to found a long-lived colony. A colony of leafcutter ants is like no other.

From a single tiny hole, a colony expands into a labyrinth of chambers. Many chambers near the surface have fungus gardens.

Fully developed, a single leafcutter nest may house a thousand gardens, in a subterranean antropolis up to 30 meters across and 5.5 meters deep, taking up anywhere from 30–600 square meters, with up to 10 million colonists.

36 tonnes of soil may be excavated in digging a leafcutter nest. Cavernous perimeter tunnels, which may extend 8 meters from the nest, make a beltway around that defines the subterranean city.

A leafcutter colony may last for a decade or more. The depth of a nest is limited only by the water table below.

As a colony matures, leafcutters are organized by caste. All are daughters of the queen, who may lay 50 million eggs in her lifetime. The young females, kept infertile by hormones from mother, become workers.

A worker’s caste is determined by how much fungus they were fed as larvae. The different castes are based mostly on size.

Up to 7 physical castes are present in mature colonies, including the queen, which outsizes all others. 4 worker castes are notable: majors, medias, minors, and minims.

Majors are large soldiers, acting in defense of the nest, trail clearance, and hauling bulky items back to the nest. Soldiers check out other ants in their path with their sensitive antennae. Encountering an enemy results in releasing a chemical alarm (pheromones) that summons others. The pheromones drive soldiers into a killing frenzy.

Medias forage, cutting leaves and bringing the fragments back. If a leafcutter encounters a soft fruit, it eagerly engages in cutting chunks for carriage to the nest. 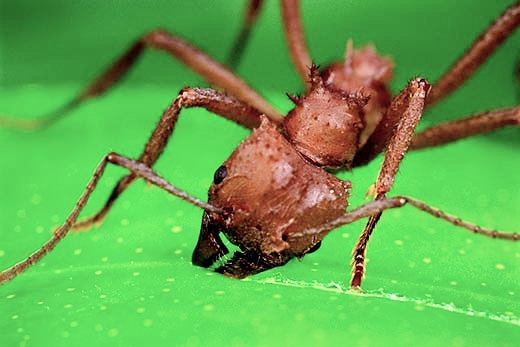 Leaf-cutting technique is like an electric carving knife. A media stridulates: rapidly oscillating her hind end, vibrating the mandible as a cutting tool. The sound attracts other workers to the site.

The craft of a media worker is circumscribed by biology. A media starts her career as a leafcutter with scalpel-sharp mandibles, but repetitive slicing dulls the V-shaped blades in time. A dull mandible means that it takes twice the energy and time to cut a leaf, compared to a young blade.

Rather than retire as a forager, older medias change their career to carrying sheared-off vegetation back to the nest. Cut leaf fragments may be several times larger than the ant carrying it. 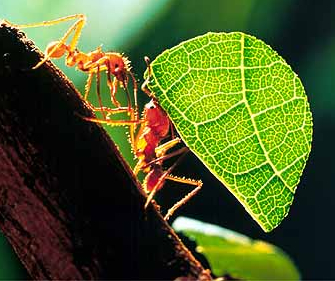 Each worker runs an estimated human equivalent of a 4-minute mile for up to 50 km, lugging 225 kg. For efficiency, foragers follow one another, forming a distinct line, and thereby carving noticeable paths through the forest.

To maintain rapid transit, trunk routes are kept clear of vegetation by road workers. These roadways are static and long-lived; an extension of the nest architecture.

Leafcutters are smart workers. When foragers sense rain coming, they hustle back to the nest with what they have got. A wet leaf fragment weighs more than double a dry one: too much to make the effort worthwhile.

Leafcutters in a caste take specialized jobs according to ability and immediate need. With hundreds of thousands to millions of workers carrying out a variety of coordinated tasks, the foraging effort is an extremely well-choreographed production. Pheromone markings and other signals create an information network which facilitates discovering and exploiting the highest-quality resources available.

Workers are subject to pests, notably the parasitoid phorid fly, of which there are 110 known species. A phorid will try to land on an ant’s thorax and plant eggs.

Larvae hatch and head to the head, where they devour the ant’s brain, during which the ant wanders aimlessly for a couple of weeks. After that, the head falls off by enzymatic decapitation. The larva releases an enzyme that dissolves the membrane keeping the ant’s head attached to its body. The fly pupates in the head capsule for a couple of weeks, before emerging as the next generation of threat.

To thwart the prospect of losing one’s head, medias keep lookouts when hauling leaves. The small ants ride shotgun on leaves to keep the flies at bay when the hauler cannot defend herself.

Majors are 3 times larger than minors but are overwhelmed numerically. Minors are the first line of defense, continuously patrolling the terrain, especially the foraging lines.

Tiny minims are fungiculturists: tending gardens of domesticated fungi. While leafcutter species each cultivate their own species of fungus, all leafcutters like the Lepiotaceae fungus family.

Leafcutters and Lepiotaceae are thoroughly mutualistic. Their bond is such that neither is found in Nature without the other.

Though some leaf sap is consumed, harvested leaves themselves are indigestible to the ants. The cuttings serve as fodder for the Lepiotaceae. Leafcutters cultivate bacteria which render the leaves digestible to fungi.

Since the leaves are largely fungus food, the ants need to be careful that their gardens don’t overdose on the chemical defenses that any particular plant may have. The minims chemically listen to Lepiotaceae, which tells them which leaves it likes. If a certain leaf is toxic, minims tell medias to stop bringing that plant.

The fungus is fed to ant larvae. Adults live largely off leaf sap, topped off by fungus and yeast. The larvae need the fungus as food, while the fungus needs ant-tending to thrive.

By replanting hyphae on their carpet of vegetation, ants prevent fungal spore formation and sexual reproduction. To the ants, spores are superfluous, as they do not eat them.

Because of this practice, the fungus relies upon the ants to achieve asexual reproduction, just as the ants cannot get enough to eat without their fungus gardens.

Like other fungus-growing ants, leafcutters fertilize the colony’s fungal gardens with their own manure. The fungal enzymes that break down plant matter are preserved despite ant digestion.

From this, Lepiotaceae can recognize whether the ants have eaten from a different fungal source. This information carries throughout a colony’s fungus gardens, and the fungus reacts negatively.

Introducing an alien fungus lowers garden productivity, which in turn affects the ant colony. Hence, the ants’ manuring practice regulates the symbiotic relationship, obliging a colony of leafcutters to a single fungal strain. A neighboring leafcutter colony may cultivate a different strain.

Minims cultivate the fungal farm, feeding it with freshly cut leaves, grooming it, cleaning it, pruning it, and keeping it free from pests, especially the parasitic mold Escovopsis weberi.

This mold does not compete with the cultivar by eating living leaf fodder. Instead, E. weberi is necrotrophic: living off dead organic matter. It kills the cultivar before it consumes Lepiotaceae, the leafcutter’s fungal crop.

Molds often invasively infect, then kill their host. E. weberi instead slaughters Lepiotaceae by secreting compounds that break down the cultivar’s cellular structure. E. weberi has a history of leafcutter coevolution parasitism going back at least 50 million years.

Leafcutters have another symbiotic partner to counter mold: Streptomyces bacteria, which grow in a specialized area of the ant: the metapleural glands. The bacteria secrete an antifungal compound onto the surface of the ant’s exoskeleton to kill the mold that would otherwise foil a fungal farm.

A leafcutter’s Streptomyces is one of over 500 species of this bacteria, which, as a genus, have a wider habitat: soil and decaying vegetation. Various Streptomyces provide 2/3rds of the naturally derived antibiotics that humans use.

Nitrogen-fixing bacteria are yet another symbiont in leafcutter colonies. Leafcutters maintain a clean vegetative substrate that engenders bacterial nitrogen-fixers. The bacteria convert atmospheric nitrogen to ammonia, a bacterial waste product that serves as a basic building block of amino acids and proteins for the ants.

Leafcutters are hygienic. They keep their gardens immaculate through a variety of practices: plucking out alien fungi and other waste, inoculating the correct fungal mycelia onto fresh substrate, fecal fertilization, antibiotic secretion, and application of growth hormones.

Temperature and humidity inside the colony are tightly regulated. Leafcutter nest architecture is constantly managed to adjust for ambient conditions outside the colony.

Especially owing to the constant threat of parasitic mold, waste management is crucial to colony longevity. Larger, deeper pits than fungal gardens, at the bottom of the nest, hold waste.

Garbage is deposited at designated waste stations, then transported to central waste pits. The pits are like a trash chute. They are located directly below openings to the surface, allowing proper ventilation. Soil covers notably noxious pits.

The risk of infection is higher in waste workers than in other occupations. Waste transport and disposal duties are taken by older, more dispensable ants, who only have a few weeks life left at most. Older workers taking jobs with greater risks, in a variety of contexts, is common to many ant species.

Leafcutters are the chief herbivore of the New World tropics: harvesting ~15% of the leaves produced in a rain forest. Yet leafcutters are savvy enough to not kill trees: they shift between plants.

Foragers prefer to harvest leaves from drought-stressed flora. On any plant, vigorously thriving leaves are bypassed in favor of stressed leaves, which contain higher concentrations of valued nutrients. This minimizes the toll on plants.

Leafcutters have a larger perspective on their foraging. Their harvesting depends not only on certain leaf traits, but also accounts for the ecosystem as a whole. Leafcutters live a sustainable existence.

The sophistication of cooperation, nest architecture, and maintenance, and their assembly-line farming, render leafcutter ants an impressive apex in the animal kingdom. Only modern human colonies approach leafcutters in complexity. By comparison, people are ecologically insensitive dullards, lazy, and badly disorganized.

Another ant has carved a similar lifestyle, albeit adapted to an arboreal habitat.