Whereas leafcutter ants cut leaves as fungus fodder, weaver ants build their nests from leaves. Weaver ants live in the tropical forests of Africa and India, as well as Australia and the Solomon Islands. 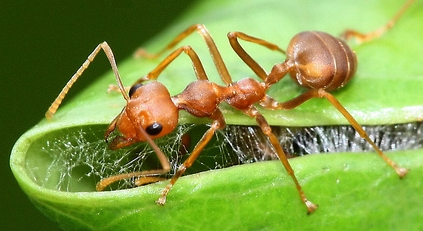 Highly organized, separate teams of workers bend leaves and glue them together to form nests, “in size between that of a man’s head and his fist,” scribed English naturalist Joseph Banks in 1770.

The glue used to hold the leaves comes from mature larvae. While a leaf is held together by a leaf-tugging team, each of a coordinated sewing team holds a larva between its mandibles, swinging a larva back and forth, spinning connections between leaves; signaling with their antennae to the larvae to release sticky threads from glands below the larva’s mouth. The larvae donate all their silk to the communal cocoon.

The size of leaf-weaving teams varies by need. After a few ants have managed to bend a leaf onto itself or toward another leaf, nearby workers join in.

If the span between leaves is beyond the reach of a single row of ants, workers form chains: an extension ant grasps the ant in front by the petiole (waist). Numerous intricate chains may be formed in unison to bring together large leaves.

As with other social ants, weavers communicate with pheromones and tactile signals; but weavers know their roles and act according to what is going on.

A leaf nest can be built within 24 hours and may last more than a month. A nest is strong and watertight. Meanwhile, ants continually build new nests: replacing deteriorated ones and those damaged by storms.

Nest-building is strenuous activity. Weavers are up to it. They can hold onto something more than 100 times their own weight while hanging upside down without losing their grip on the branch they are hanging from.

Weaver ant tarsi have moist, expandable food pads that can adhere to surfaces via capillary forces. Ants control these pads to move, or stay stuck, as need be. Reaction time is a millisecond. The fastest known nerve reflex response takes 5 milliseconds, so the ants’ quick grip must be mechanical, controlled energetically.

A single colony may have half a million weavers, scattered among 150 nests in as many as 20 trees. A weaver colony may patrol 1,600 square meters, one of the largest territories known for insects. Weavers are the dominant ant in their domain.

Among their own species, weavers generally respect each other’s territories, though neighboring colonies may occasionally battle for territory. Colony boundaries are clearly marked, with a no-ant’s-land strip between border lines.

Weaver ants recognize neighbors by scent. Once an ant has had an encounter with a rival, it goes back to the colony and passes this information on: how the rival smelled, and how aggressive the interaction was.

This intelligence is shared among workers. Contacts with rivals is continually updated among nest mates. Ants adjust the aggressiveness of their responses based upon the colony’s experiences.

Inside the silk-walled nests are dairies. Weaver ants tend sap-sucking scale insects, collecting honeydew (a sugary sap) secreted from the bright red scales of adults. The scales thrive under the care of the weavers, producing gold-colored young.

As with many other ant species, weavers are morphologically specialized, with different worker castes. The smallest weavers – minors – lick the scales to clean them and collect the discharge: a honeydew which they regurgitate upon demand, whereupon a receiving larger sister transports and distributes the produce to others in the nest.

Senior majors, some missing a leg, or with worn mandibles, protect the colony as scouts and guards. They retain sharp eyesight and acute sense of smell and have the added advantage of life experience. Seniors are also the most expendable.

The dairies are a supplement to the weavers’ diet. Weavers primarily eat other insects, including scorpions, but are not beyond more exotic fare, such as snake, crab, or bird. Workers share their harvest – partly digested and regurgitated – with the brood.

A worker spots a banquet: more than it can handle alone. The worker releases a short-range recruiting pheromone to call nearby colleagues, who race to assist. They spray the prey with formic acid (a common venom in ant bites and bee stings), grab the prey and hold it, limbs splayed, until it is subdued.

Weaver ants hunt practically any invertebrate big enough to be a meal. They are such effective hunters that weaver ant territories typically have lower populations of other insects than those areas outside weavers’ hunting grounds.

The insects that weavers eat are often plant pests, so weavers benefit plants by decreasing herbivory. Weaver colonies have been employed in citrus orchards for pest control in China and Southeast Asia since at least the 5th century.

Fruit trees with weaver ants produce higher-quality fruit and suffer less leaf damage from herbivores. The blessing is mixed, as weavers are a frightening foe, and so limit pollination by insects, and fruit removal by birds and mammals, thereby reducing seed dispersal. The scale insects and leafhoppers that weavers farm for honeydew also take their toll on trees.

There are weaver ant predators. Some caterpillars lure ants with their sweet honeydew scent, giving them entry to a nest, where they devour ant larvae.

There are species of jumping spiders that resemble and smell like weaver ants. This deception affords entry into a nest without provoking an attack. Once inside, a spider feasts on eggs, larvae, and ants.

Weaver ants also preyed upon by humans. In Thailand and the Philippines, weaver ant pupae, which have a creamy flavor, are harvested and sold in food markets. Adult ants, with a lemony/creamy/sour taste, are also delectable.