Cephalopods became dominant during the Ordovician period. 11,000 groups (taxa) of cephalopods once existed. Today, only 800 species are extant. 300 of those are octopuses, inhabiting several regions of the ocean, including coral reefs, pelagic waters (the open sea), and the ocean floor.

An octopus has 2 eyes, 4 pairs of arms, a hard beak, and a mouth at the center of its arms. What an octopus does not have is a skeleton of any sort, though some species retain a vestigial shell remnant inside their mantle (head). 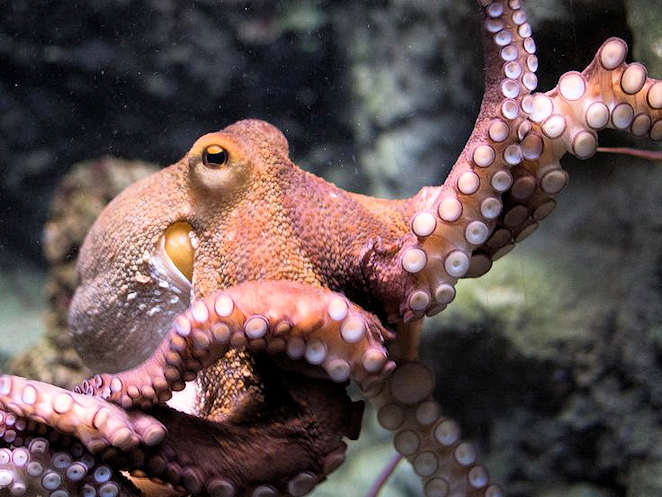 Cirrina octopi have a small, internal shell, and 2 fins on their head which are used for swimming. This suborder is named for the clilia-like strands (cirri) on their arms: a pair for each sucker, thought to assist feeding by creating currents which help bring food closer.

The better-known Incirrina include the benthic octopi, as well as many pelagic octopus families. Incirrina lack the shell, fin, and cirri features of Cirrina octopuses.

Octopi have a highly efficient metabolism. The giant Pacific octopus is about the size of a rice grain when it hatches. Within 3 to 5 years, it may have arm spans of 3.6 meters. Hawaiian octopus juveniles can gain over 4% of their body weight daily. Diguet’s pygmy octopus grows from 1/400th of a gram to 40 grams in 6 months: a 1000-times weight gain in a half-year.

The octopus body is squishable. Like human tongues and elephant trunks, octopus arms are muscular hydrostats: muscles that may move without skeletal support. Hence, an octopus can dramatically change its dimensionality while its total volume remains constant. This allows octopi to get through seemingly impossible tight spaces. A giant Pacific octopus can squeeze itself through anything smaller than its hard beak and braincase; allowing it to slink through an opening 3 centimeters in diameter.

An octopus has 3 means of propulsion. It may walk along using their arms, which is its preferred means of getting around; actively swim by flexing arms and body; or zoom on, by jetting water through its body.

All vertebrates have a single heart. Octopi have 3: 1 for the body, and 1 for each of 2 gills. To breathe, water is drawn into the mantle cavity, where it passes through the gills.

Oxygen is transported in octopus blood by the copper-rich protein hemocyanin, which is less efficient in temperate habitats than the iron-rich hemoglobin of vertebrates, but much better in cold water with low oxygen pressure. The hemocyanin floats in the plasma instead of within red blood cells. This gives octopus blood a bluish tint.

With 450 million years to develop into diverse settings, savvy should be expected. While some cephalopods are remarkably clever, octopuses exceed all expectations.

Octopuses use tools. They can open childproof caps that elude the skill set of many adult humans.

Octopi have a sense of order and cleanliness; plan ahead; are quick learners; have excellent memory; recognize different shapes and patterns, including human faces; readily solve problems; and easily work their way through mazes.

Octopuses are a carnivorous mollusk. In search of a late-night snack, captive octopuses break out of their aquarium holds and into others. The sly suckers have boarded fishing boats and opened holds to feast on crab.

Octopuses are natural mimics, and playful throughout their short lives. Larger species may live to 5 years. Some last but 6 months.

Octopi have a distributed physical intelligence system, only 40% of which is localized in the typical, walnut-sized brain. Each octopus arm has a mind of its own, with an individual sense of proprioception. These arm minds meld to form an integrated mental whole.

Cognitive power on the arms is understandably necessary when you consider that each arm has about 240 suckers on it, each of which may be individually manipulated. An octopus can move or rotate an individual sucker, or even fold one to use as a pincher. An octopus can even move a picked-up object up or down its arm using only its suckers, without having to move its arm.

Suckers also gather tactile and chemical information about their immediate environment. A sucker can taste what it is handling.

Mental integration is illustrated by octopus’ ability to create subtle, whole-body shifts of camouflage coloring, along with accurate behavioral imitation, in their highly flexible bodies. Octopi mimic more dangerous animals, such as eels, sea snakes, and lionfish, to avoid becoming prey. They also use mimicry to be a better predator.

Octopuses pick and choose elements of their immediate environment, or from their memories, to compose the look they want. This mental image is then displayed on their body. A similar process results in behavioral mimicry: dance moves in the mind take physical form in the subtlest ways.

Like many hunters, the octopus visually relies on movement to spot a potential meal. A skittering crab freezes if it suspects that is being tracked, in hope of evading detection and capture. A crafty octopus may hover near a crab and create a “passing cloud” display, by moving a dark patch across its body. This can confuse or startle a crab into moving, enabling the octopus to nab it.

Octopi can camouflage anywhere they go, and they can do that in a fraction of a second. ~ American marine biologist Roger Hanlon

What is most astonishing is that the remarkable color shifting of octopi is achieved by an animal which has no color vision photoreceptors. Despite being ostensibly color-blind, octopi can purposely produce vivid color displays that adroitly match their desires: whether blending into the environment to disguise themselves, or in acts of bodacious animal mimicry.

From a standpoint of vision receptors, octopuses are color-blind. But there is something more to their sight. These creatures have odd vision hardware: an off-axis, U-shaped pupil that affords chromatic aberration, where prismatic colors may be perceived because different light wavelengths come into focus at different distances behind the lens. The resultant visual imagery is not sharp but does give a sense of color. From there the mind interprets.

Octopi also have opsins – light-sensitive proteins – on their skin. Opsins have no focusing lenses. They are just light receptors. And octopi only have a single opsin type on them; which means the opsins cannot discriminate colors, which would take multiple opsin types. How octopuses make use of the information from their opsin network is not known.

Like most animals, the octopus body has bilateral symmetry: the left and ride sides are mirror images of one another. Animals with bilateral symmetry always have a preferred direction of movement relative to body orientation; except octopi. Their 4 pair of arms are all around it. Animals with such radial symmetry, such as sea stars and octopuses, can move in any direction. So too octopi.

When trolling the seafloor, which is the preferred mode of locomotion, octopuses use the back arms for walking, and the front ones for feeling around. Octopi also tend to favor certain arms; a sort of handedness, common to many animals.

On top of superlative shapeshifting, an octopus’ ability to change direction unpredictably in the blink of an eye provides a superb defense against predation.

To live so successfully in so many of the world’s diverse marine biomes, octopi made some stunning adaptations, from 3 hearts to blue blood.

Octopuses are ectothermic, which why they can have such an efficient metabolism, as illustrated by their rapid development. The drawback to ectothermy is relying upon the ambient environment to regulate temperature. Yet some octopi manage to live in frigid water.

Besides depleting basic body heat, the cold degrades the nervous system. Nerve cells depend upon electrochemical communication. This requires precise timing in ion flows – a dynamic which is temperature-sensitive. To adapt, octopi edit their genes.

Octopuses are rewriting the genetic code of their proteins that are involved in electrical excitability through RNA editing. They might be regulating their editing for lots of different reasons. ~ American neurobiologist Joshua Rosenthal

The Pacific pygmy octopus, which is about the size of a gum ball, lives in the estuaries of Baja California. The water there rises to 32 °C during a summer day and drops to 4 °C in a winter night. RNA editing lets the little octopus adjust.

While plants are known to actively manage their genic activity, octopuses are the only animal known to exhibit such molecular acumen.

There is every reason to think that octopi are far smarter than the predominant primates that live on land, as octopus behaviors are much more sophisticated. Not incidentally, octopi have 770 times the brain cells of humans (octopus arms included).

Most octopuses live asocial lives. We do not know how these lone animals find a mate; scent likely plays a part.

A male set on mating approaches a female that has reached sexual maturity, just close enough to stretch out a specialized reproductive arm (hectocotylus) and caress her. After some time in foreplay, the male inserts his hectocotylus into the female’s mantle and fertilizes her eggs, which may commonly number to 1/2 million in 1 batch.

Eggs may take 4–6 months to hatch, during which the mother guards them, jetting water to aerate and clean them. A female does not hunt while protecting her eggs, though she may eat some eggs to keep her going.

One species of cold-water deep-sea octopus broods her eggs for over 4 years. Mother cares for them the whole time, herself eating little or nothing. Octopus eggs, as with other invertebrates, develop more slowly in cold water.

Mom dies soon after the eggs hatch. Males too die within a few months of mating.

Young larval octopuses may be but a few millimeters. They float to the surface, becoming part of the plankton for about a month, then sink and begin a normal life.

Their parents gone, young octopuses must learn quickly or risk becoming a shark snack. Unlike many animals, where sociality demands adaptively drive enhanced intelligence, octopuses are mostly solitary, which makes their savvy all the more impressive.

There are exceptions to this typical life cycle. The Pacific striped octopus, which lives off the coast of Nicaragua, are social: living in groups of up to 40. Females lay multiple egg clutches. These octopi mate face-to-face, sucker-to-sucker.