As with communication proclivities, iguanas and scleroglossans have contrasting lifestyles. Iguana are highly territorial, with a defined home range. These lizards both advertise and defend their territory via ritualized displays. Scleroglossans are relatively non-territorial: defending only their homes.

Territorial boundary establishment and maintenance is a common cause of aggressive interactions between lizards, which usually involves sexually mature males. These behaviors vary by species: visual displays, posturing, chasing, grappling, and, at the extreme, fighting with potential for serious injury.

Boulders in northeastern Brazil host a dense community of striped lava lizards. A dozen or more may be on a single rock. Each social group boasts a dominant male, as evidenced by enlarged testes, along with subordinate males, who have smaller cajones, and several females, as well as numerous juveniles. 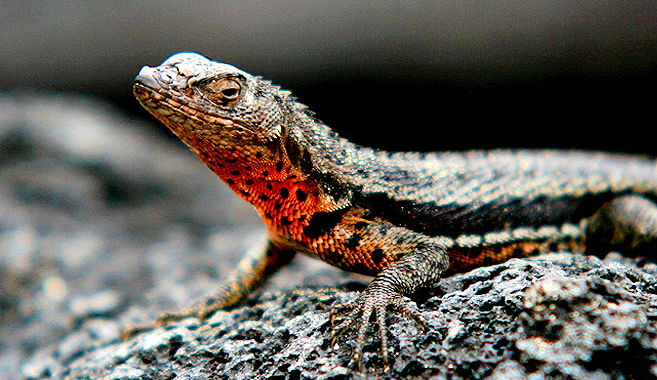 The dominance hierarchy maintains social order and allocates rock space, including spacing between individuals. When an intruder approaches, the group hustle across the rock in a wave, into crevices. These flat lizards pack themselves into crevices like volunteer sardines.

The dominance hierarchy is suspended while in a crevice. Emerging from the crevice onto the rock reestablishes social order.

All lizards in the group keep a lookout for predators. When one responds to a perceived threat, others follow that lizard’s lead and enter crevices. Survival trumps social niceties.