Sharks were around by the Late Silurian, 420 MYA, and became a most successful order in both the oceans and fresh water. During the Devonian, the shark-related ray, with its flattened body and sea wings, glided through the ocean, scooping up plankton.

Sharks evolved from bony fish. Going from bone to a cartilage skeleton made them nimbler and quicker through the water.

Cartilage was the evolutionary precursor to bone, but the shark skeleton was not a reversion. It was instead an adaptive innovation.

Shark skeletons are a prismatic calcified cartilage: a mosaic of tiny mineral prisms, unlike the cartilage sheets of early fish. This peculiar prism structure yields both pliability and strength with much less weight.

Shark skin is covered in denticles that increase swimming speed by improving thrust. These toothy ridges distort water flow in a way that reduces resistance.

The other part of the shark success story lies in sophistication within. While most fish maintain a neutral buoyancy by means of a gas-filled swim bladder that runs the length of their bodies, sharks and other cartilaginous fish do so by having copious quantities of oils in their livers. These fish are slightly heavier than seawater and obtain lift by having the top lobe of their tail larger than the bottom lobe.

When not swimming, sharks rest on the sea bottom. So too skates and rays, which are sharks that took to lying on the bottom; hence their adaptive flattening. Skates and rays move by undulating their greatly enlarged side fins: literally flying through the water.

Sharks and their cartilaginous cousins differ from other fish and amphibians in producing large eggs. Males bear claspers on their pelvic fins to inseminate females. Fertilization is internal.

Claspers were lacking in Devonian sharks. They adopted this reproductive style during the Carboniferous, contemporaneous with the evolution of tetrapods.

While some sharks birth live young, other lay eggs. Each egg has an attached yolk sac, enclosed in a case secreted by the female’s shell gland. Called mermaid’s purses, these egg cases are commonly found washed up on beaches.

An embryonic shark/skate/ray develops within its case and emerges fully formed. Sharks are superprecocial, brimming with inborn knowledge. Young sharks are physically tougher than older ones, affording a resilience and energy efficiency that somewhat compensates for inexperience (in tolerating mishaps from misjudgment).

Sharks diversified rapidly during the Carboniferous, but from the end of that period they lived many millions of years with only modest evolutionary change. Extinction events knocked sharks sideways, but not out.

Some sharks today are quite like those of 250 million years ago. The cockroach is an upstart by comparison.

Shark success was a considerable divergence from placoderms. Part of the shark advantage lay in simplicity: a sleekness that was hydrodynamically efficient, built on a flexible cartilage frame.

Sharks have extraordinary senses, including uncanny olfaction: able to smell blood in the water 0.5 km away and track it to its source. 1 part in 25 million is sufficient to detect a potential prey. 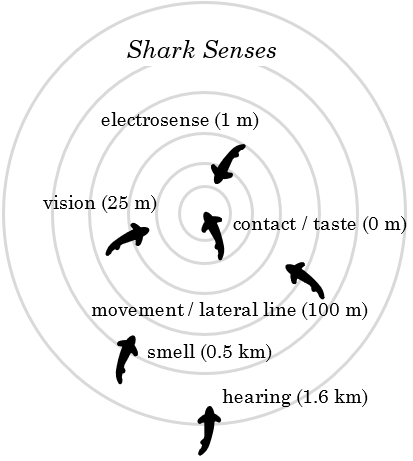 The timing of incoming scented molecules tells a shark the direction to go. Some sharks can sense airborne smells as well. Fish generally have excellent olfactory function. Even so, sharks are exceptional.

Sharks can hear below 600 hertz, and so detect injured prey or spawning fish 1.6 km away.

Sharks are generally far-sighted, with a focal range from 25 cm to infinity. The human eye distorts to focus; sharks move their eyeballs to focus. Sharks have visual acumen comparable to humans, including color vision, though sharks have greater sensitivity in low light.

As with other fish, sharks have a lateral line that works closely with the auditory system to pick up vibrations for up to 100 meters away, and track prey movement quite easily within 2 body lengths.

In the snout of most sharks are small, jelly-filled pits which can detect minute electric fields associated with muscle contractions, such as a heartbeat or muscle flexing, with sensitivity to 100/millionth of a volt per centimeter.

A shark’s electrosense starts before it is born. Embryotic sharks can sense when a predator is near and keep very still to avoid being detected. They slow their breathing down to minimize any ruffle from respiratory gill movements.

The shark electrosense organ – the ampullae of Lorenzini – is named after Italian physician and marine researcher Stefano Lorenzini, who published his discovery of sharks’ electrical sense organs in 1678. Electrosense lets a shark detect a target hiding under seabed sand or gravel. Hammerhead sharks have their electrical sensors spread across their unusually wide snout, allowing them to sweep their heads side-to-side to scan for prey.

Sharks have this incredible ability to pick up nanoscopic currents while swimming through a blizzard of electric noise. A shark’s electrosensing organ is tuned to react to changes in a sudden, all-or-none manner, as if to say, ‘attack now’. ~ American physiologist David Julius

The great white shark uses its electrosense in the moment of attack: swiveling its eyes back into special sockets to protect them from the claws or teeth of a seal or sea lion about to be bitten. This also explains why great whites attack boat propellers and shark cages. They sense these unnatural metal objects in seawater as muscles being flexed.

Having taken a bite, a shark’s sense of taste determines whether the prey is worthy of consumption. Great whites spit out humans, even obese ones, as lacking the high-energy fat that makes a decent meal. That is why shark attacks are not always fatal; it depends upon where the first bite is taken. Many sharks are picky eaters, though the tiger shark is the ocean’s garbage collector, willing to take a chunk out of most anything that moves.

Sharks display an affinity for one another. ~ Australian ichthyologist Culum Brown

Contrary to long-held conjecture, sharks are quite social. Why the surmise of solitude has held is something of a mystery, as sharks were called “sea dogs” until the 16th century, and dogs are notable for their sociality. Perhaps sea-going folk wisdom was replaced by supposedly more ‘scientific’ supposition based upon less keen observation.

Within a school, sharks follow each other in formation. Sharks have a sense of personal space like humans.

Sharks signal to each other with a wide variety of postures and movements. Though their communication is little understood, it is known that sharks have various degrees of threats and warnings that they provide to others. Gray reef sharks warn human divers who get too close. An unheeded warning prompts an attack.

Many sharks migrate vast distances, remembering places and old friends. 2 female great white sharks are known to return to the waters off the Farallon Island, west of San Francisco, to hunt breeding elephant seals and hang out together: arriving at the same time, patrolling the same places, present at each other’s kills.

Sharks, long presumed a “primitive” sea life, went largely unchanged for hundreds of millions of years owing to ingenious design. Generally considered none-too-bright, sharks must have considerable mental powers to employ such an impressive array of senses, have such tremendous memories, and enjoy active social lives. It’s not the sharks that are dimwitted.

(Sharks generally attack from behind. To do this requires knowing the orientation of their prey, especially where the eyes are.)