320 MYA amphibians were the predominant fauna. Their telling weakness was the requisite of a moist habitat, especially in needing to lay their membrane-encased eggs in water to keep them from drying out.

The first frogs retained a tail and lacked the hopping ability of next-generation frogs. Otherwise, the frog body plan has been much the same for almost 200 million years. The last common ancestor of all extant frogs lived 210 MYA. Spurts of diversification coincided with break-ups of major landmasses. ~130 MYA, the modern frog evolved.

Reptiles first distinguished themselves by the innovation of eggs with calcium carbonate shells that resisted desiccation (amniotic eggs). This afforded laying eggs on land.

The most formidable challenge to life on land has been and remains desiccation. Adaptation to aridity has repeatedly driven the evolution of terrestrial animals and plants.

Reptiles branched out early on, acquiring new niches via distinct feeding strategies. The earliest reptiles were piscivores (fish eaters), followed by a craving for the crunch of insects (insectivores), before diversifying both up and down the food chain.

It took extensive adaptation for vertebrates to become herbivores, thereby gaining access to the nutrients locked behind the cellulose walls of plants. The credit goes to the gut flora which perform digestion: a symbiotic advance.

315 MYA, synapsids descended from reptiles. One family, the caseids, were at first carnivorous. Then they took to eating plants, becoming the first fully terrestrial herbivorous vertebrates. Herbivory independently evolved at least 5 times in the different synapsid clades. Edaphosaurs were one of them.

Caseids and edaphosaurs had distinct feeding strategies. Like today’s iguanas, caseids did not chew their food. Conversely, edaphosaurs had massive crushing dentition and strong jaws for grinding.

In all instances of convergent evolution to herbivory, synapsids became much larger than the small carnivores they descended from. 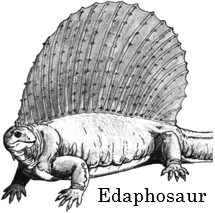 Other synapsids at the time had the tall dorsal sail of edaphosaurs, including the large apex predator Dimetrodon. The sail served a thermoregulatory function: letting an ectothermic synapsid capture or release heat.

So began the rise of reptiles: adapting to new niches by acquiring new diets and other adaptations. ~20 orders of reptilian families arose.

Reptiles emerged via better water conservation. It seems paradoxical that reptile success led to their going back to the water. Numerous reptiles became aquatic at various times. Adaptation answers wherever resource opportunity knocks.