This was the biggest mass extinction of all time, responsible for the loss of 90% of all life in the oceans, and 70% on land. ~ English geoscientist Matthew Clarkson

The Paleozoic era came to a crashing finale 252 MYA with the largest mass extinction in Earth’s history: the Permian–Triassic (P–T) extinction event.

The continents came together during this time; a shift that doubtlessly affected ocean currents, which put marine species under adaptive pressure. Continental drift created sills: intrusive sheets of igneous rock from flowing magma. Heat from the sills liberated massive volumes of greenhouse gases which rapidly elevated global temperatures. Siberian volcanoes added volatile gases such as chlorine and bromine, which depleted the ozone layer. Some of coal beds first laid down during the Carboniferous burned.

The additional nickel that volcanoes unearthed spurred evolution of marine microbes which spewed methane into the atmosphere, worsening the warming and atmospheric pollution.

A few aquatic groups seem to have swum on relatively unscathed; in particular, sharks and other fish, together with debris feeders and various mollusks. Many of the marine invertebrates were bottom dwellers that could tolerate low oxygen. How fish largely survived is a mystery.

On land, 77% of all animal and 70% of terrestrial vertebrate species died off. The Great Dying was the only mass extinction of insects.

Compared to animals, plants are relatively immune to mass extinction: if not in population numbers and distribution, in diversity loss of families. The Great Dying was exceptional. The flora of that time scarcely survived.

With plants beaten down, herbivores were badly hit. Among them were the dominant land animals in the Late Permian: therapsids, which had emerged 275 MYA. The extinction of these beasts left ecological niches which came to be filled by emergent dinosaurs. Therapsids left a legacy: they begat cynodonts, which gave rise to mammals in the Late Triassic.

Sudden, severe climate change heightened the decimation. The extinction event happened in 60,000 years: too quickly for much life to adapt to the harsh changes.

Extinction happened in a series of quick jolts, not a single event. Something set off massive Siberian volcanism: probably bolides, possibly continental reconfiguring.

There were 2 significant pulses of atmospheric carbon dioxide. The 1st pulse started when oceans were highly alkaline, due to prevailing anoxic water conditions. This buffered the oceans against acidification.

The population of methanogens are limited by nickel availability. Volcanoes supplied a surfeit of nickel into the oceans. This led to an explosion of methanogenic microbes, which rapidly evolved to take advantage of the situation by optimizing their metabolism. Their presence altered the carbon cycle by producing tremendous volumes of methane. The resultant rapid global warming had a devastating terrestrial effect.

The shallow seaway between Gondwana and Laurentia shrank during the late Carboniferous, finally disappearing, along with extensive swamp lands.

With continued intercontinental crunching, the tropical suture zone turned into alpine ranges. By the end of the Permian, the continents had joined to form Pangea, a single supercontinent, surrounded by the super-ocean Panthalassa. 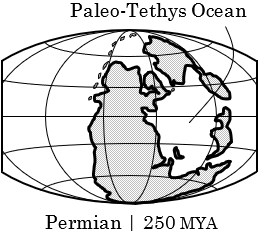 The ecological effects of continental drift alone were considerable. Bereft of water flow throughout, the interior of newly formed Pangea dried up as temperatures rose in this extensive landlocked region. The Carboniferous swamps became arid deserts during the Permian.

The formation of Pangea had global effect. Across the supercontinent, aridity predominated almost to the 60th parallel. Beyond that was a narrow temperate band which quickly yielded to frigid conditions in the high latitudes. In effect, Permian biota were squeezed by merciless cold at the poles and baking deserts in the low and middle latitudes.

Atmospheric oxygen levels dropped precipitously worldwide, while CO2 levels soared. Sulfate-reducing bacteria proliferated in the oceans, creating vast emissions of hydrogen sulfide, poisoning plant and animal life on both land and in the sea, as well as weakening the ozone layer, bathing the life that remained in a continual rain of ultraviolet radiation.

The wonder is not the extent of extinction, but that so many species managed to survive. The Great Dying was devastating, but in less than 2 million years, sea life was on its way to recovery as anoxic oceans relented. A hot planet hindered terrestrial recovery, which took some 20 million years for the rejuvenation process to get underway.

In the meantime, various opportunistic organisms took advantage of the devastated ecosystems to enjoy a temporary boom. Fungi had their fun for a while, feeding on the abundance of deceased plants and animals.