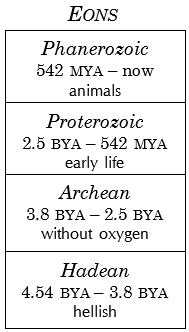 Earth scientists divide the geologic time scale of our planet’s 4.55 billion-year history into a nested hierarchy of eons, eras, periods, epochs, and ages. Eons have eras, eras comprise periods, and so on. The division is ostensibly based upon stratigraphy: a branch of geology related to rock layers (stratification).

Earth’s surface was supposedly hellish in the Hadean eon (Greek for “underworld.”) After that, each succeeding eon marked a milestone in predominant life forms, based upon now outdated estimates.

The Proterozoic was the eon of oxygen buildup: the by-product of plants’ progenitors. The Cambrian period’s ostensible explosion of diversity, marked by the onset of a prolific fossil record, initiated the Phanerozoic. Each era in the Phanerozoic is marked by a major extinction event. Period demarcations are slightly less pronounced in demonstration of drastic change. Nonetheless, where once there was a regatta of biota, a period ends with an extinction event that shuffled the deck of life on Earth. 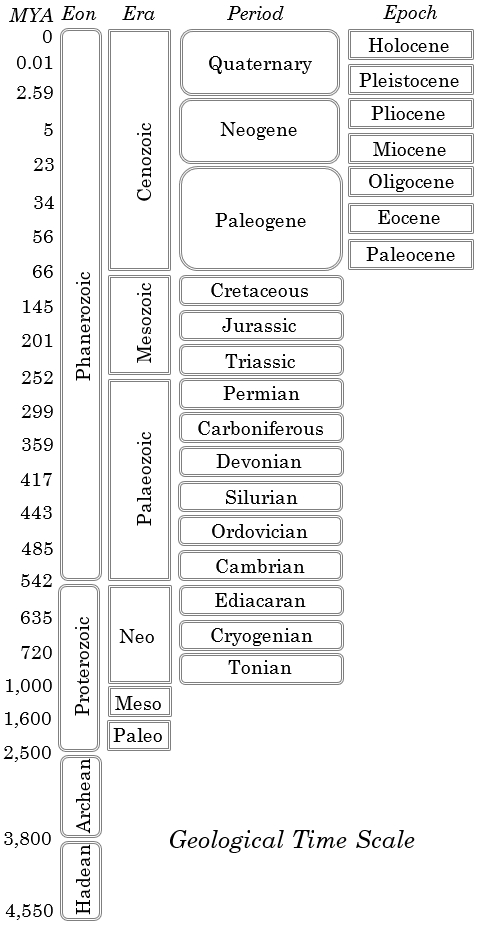