Reptilian diversity prior to dinosaurs was considerable. Unsurprisingly, the different families of dinosaurs emerged from various reptilian lineages. (Only an estimated 1/4th of the dinosaur species that lived are known.)

The earliest dinosaurs were carnivores or omnivores that walked on 2 hind limbs that were positioned directly under the body to support it from below. Long tails provided balance. 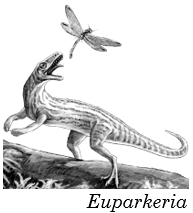 Euparkeria was a reptile genus that lived 245–230 MYA. This sharp-clawed biped with numerous needle-like teeth began in the early Triassic the size of a housecat.

Euparkeria was an agile, nimble predator of insects, grubs, and other small animals in the undergrowth. It could rear up and sprint on its powerful rear legs, using its long tail for balance.

Euparkeria was not the daddy of dinosaurs, but some of the earliest dinos were much like it. Euparkeria was at least close to the ancestry of archosaurs.

Archosaur forms the clade of reptiles that includes dinosaurs, pterosaurs (winged lizards), today’s crocodiles, and birds. When archosaurs first appeared, and their exact descent, remains in the realm of debate.

There were other, similar reptiles to Euparkeria, in what was a clear adaptive trend. 2–3 meters long, Nyasasaurus had several skeletal features characteristic of dinosaurs, including a bipedal stance. The genus emerged 243 MYA.

Adaptive pressures and convergent evolution played important roles in the emergence of dinosaurs. Various packages of life-history variables played out. The sizes, shapes, lifestyles, and behaviors of dinosaurs evolved as a biotic gyre. This was typical of evolutionary trends in macrobes throughout life’s history.