The most famous dinosaur, Tyrannosaurus rex emerged in the Late Cretaceous; near the end of the tyrannosaur family line. T. rex was one of the largest land carnivores of all time: up to 13 meters long and weighing over 6 tonnes. T. rex had a massive skull, and an enormous jaw that delivered a bone-crushing bite. The size of a chicken as a hatchling, T. rex took 15–18 years to reach full size. Making it to maturity was tough. Only ~40% survived their first year. 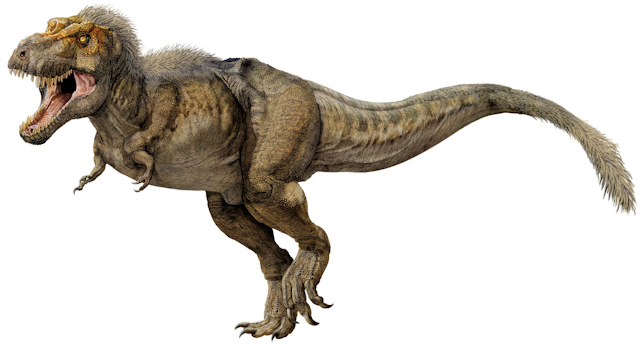 The available herbivorous dinosaurs in its environment were all much slower than an adult T. rex. It was slaughter in the slow lane. ~ Canadian paleontologist Thomas Carr

For all its ferocity, T. rex has been the butt of jokes for its puny arms. While not even long enough to reach its mouth, T. rex used its muscular arms for slashing at close quarters: an offensive defense.

(T. rex was not the only theropod with puny arms. The trait evolved independently, and similarly, in Gualicho shinyae, a large-jawed theropod that lived in modern-day Argentina. Gualicho stood 2 meters and weighed nearly 0.5 tonnes.)

Juveniles had proportionately longer arms. Young dinos likely had more use for their arms.

T. rex had eyes that faced forward, giving it stereo-scopic vision with depth of field for pinpointing prey.

T. rex may well have ears that were forward focused, like that of modern-day birds of prey. With these acute senses,

T. rex may have been a nocturnal predator.

T. rex had a snout as sensitive as human fingertips. The tactile nose was employed to explore surroundings and build nests. It also allowed the dinosaur to pick up fragile eggs and offspring. A touchy nose may also have been important in courtship, with T. rex couples rubbing their faces together in foreplay.

The neck of T. rex was like that of modern birds. Like many birds, T. rex likely raised its head and fixed its vision on its prey before lowering its head to attack.

Taking a bite involved thrusting its head up, biting, then shaking its head and pulling back with its legs to rip a hunk off: the approach of birds combined with the shake-feed of crocodiles.